Tokyo Olympians Are Showing That Grit Can Be Graceful

Bills Offense Cruises in Low Gear to Win in Miami

What We Learned From Week 8 in the N.F.L.

HUNTSVILLE, Texas — The coronavirus pandemic had already delayed Sam Houston State University’s 2020 football season until the spring semester in 2021 when, over the winter, the college’s athletic leaders met to discuss a new conundrum.

With spring and fall seasons coming up, the Bearkats were poised to begin a run of up to 24 games in 2021, eight more than they had ever contested in a calendar year. As the officials met in the athletic director’s office, they considered two choices: add another September game and earn the football program an important payout of about $500,000, or pass up the opportunity and settle for a shorter regular season than almost everyone else.

Sam Houston’s leaders declined the matchup. They reasoned that even one more game increased the football players’ health risks — too many snaps, too many hits and too little time between the seasons.

“Financially, it doesn’t make a lot of sense,” Coach K.C. Keeler, who led Sam Houston to a national championship in May, said about turning down the payout. “But I think we felt in terms of our student-athlete welfare, in terms of their experience, they would be better served if we did it this way.”

The move was a modest one because it affected only one potential game, and the Bearkats might even benefit from playing one fewer game than their rivals. Still, when university officials told their counterparts at other schools about their plans, surprised silence often followed. Division I football programs are almost never in the business of playing fewer games in the name of injury prevention. 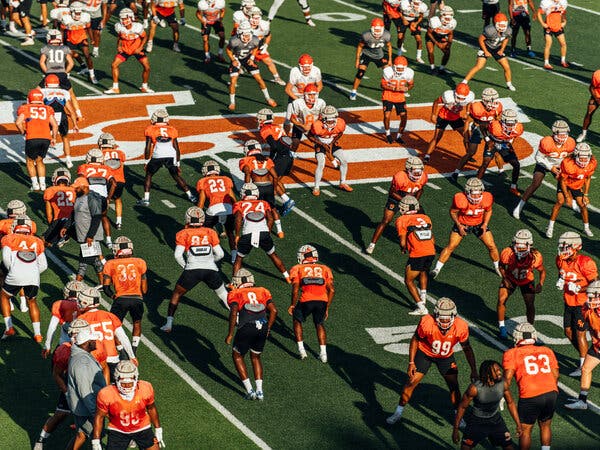 For athletic, cultural, financial and political reasons, a projection of normalcy is so far reigning throughout college football for the 2021-22 academic year. Colleges have opened stadiums and started their championship chases without as many of the testing and contact tracing protocols that ruled not long ago.

But in the Football Championship Subdivision, a competition tier that draws less attention and money than the one that includes colleges like Clemson and Notre Dame, the lurch toward business as usual comes during a concentrated annual cycle that prompted schools to think through football’s ever-present burdens more urgently.

At almost all of the roughly 90 F.C.S. schools that appeared in regular-season matchups in the spring — some played just a few, while others had six or more — administrators decided that the benefits of a customary 11-game fall schedule surpassed the risks of crowding more snaps than usual into a year.

Sam Houston balked, however, and university leaders came to see the move as prescient given the team’s championship run. Still, the team is now expecting to play 20 games from Feb. 27 to Nov. 20. A repeat bid by the Bearkats (1-0), who are ranked No. 1 in the F.C.S. and have their home opener on Saturday against Southeast Missouri, could mean four more postseason games by the end of December.

By comparison, Alabama and Ohio State, which met in the College Football Playoff championship game in January, will play no more than 16 games in all of 2021. The title matchup for college football’s brand-name powers, which play in the Football Bowl Subdivision, will be in Indianapolis in January.

Zach Hrbacek, wearing No. 21, ran with the ball in a scrimmage at Sam Houston.

The new pressures created by 2021’s F.C.S. schedule have emerged at a crucial moment for college football as a whole. Many athletic departments are under financial pressure because of the pandemic and rely on football for their bottom lines. But doctors are still warning of football’s perils, and top executives are considering whether to expand the playoff, a move that could attract at least $1 billion more in revenue a year and add games to seasons that are already long.

As an F.C.S. school, Sam Houston is not eligible for the big-money playoff. But its decision this year reflects the thinking of some Power 5 coaches as the decision about playoff expansion looms: There can be such a thing as too much football.

‘There were concerns about overexposure.’

Everything hurt, quarterback Eric Schmid said, after Sam Houston won the F.C.S. title in May. His shoulder bothered him. His right ankle had him in agony. A few days after the championship, Trace Mascorro, a 270-pound defensive lineman, had knee surgery.

“Everybody was sore, and everybody was a bit ready to be done with football,” Schmid said in Huntsville, which is north of Houston and known for its state prisons.

By the time Schmid appeared in a game this year, college football had already fought bitterly about playing during the pandemic. The N.C.A.A., which has no control over the College Football Playoff but is in charge of the F.C.S. postseason, used some of its decaying influence to move its championship event to the spring. Many F.C.S. leagues and teams followed, partly in hopes that the health crisis would ebb and partly to strengthen their postseason prospects.

The shift to the spring, though, left administrators to weigh how fall football might be affected. In an era of medical scrutiny — pandemic aside, an N.C.A.A.-funded study released weeks before the spring season’s start underscored the concussion risk in football — they wondered how prudent it would be to play in autumn.

“There were concerns about overexposure for the student-athlete,” Dennis E. Thomas, the commissioner of the Mid-Eastern Athletic Conference, recalled. But in the MEAC, Thomas said, the decision to play a full schedule this fall was easy because no teams in his league competed in more than five games in the spring.

Dave Brown, a former ESPN executive whose scheduling software, Gridiron, has him on speed dial for many college athletics officials, said he thought the reluctance to play shorter schedules could sometimes be traced to the quest to pick up enough wins to clear a path toward a postseason berth, as well as game contracts that were signed long ago.

Still, some colleges had competitive reasons to pursue lighter schedules. Although officials at Mercer, in Macon, Ga., considered the medical implications of a 10-game schedule, Jim Cole, the athletic director, said the university chiefly wanted to optimize its chances of winning the Southern Conference title.

“We liked the way the schedule laid out with our off weeks,” said Cole, whose football program, which played eight games in the spring, will visit Alabama on Saturday. “We were happy it worked out competitively, and, hey, we saved a game for our guys.”

A football schedule’s construction is a closely tended process. Administrators and coaches evaluate many factors, including travel and competitive interests, as they examine potential matchups.

Bobby Williams, Sam Houston’s athletic director, has been doing it for decades. Once plans for a spring season were set, though, he found his history with the game fueling worries about playing it so often and so quickly.

His father had been a high school and college coach in Texas; Williams himself had played high school and college football in the state, and had coached defensive backs at Sam Houston before he became an administrator. He knew the rigors of practices, the intensity of games, the aches that come from both and the restorative solace of breaks.

“Because of those experiences, it made it easier for me to understand what we were dealing with and how we needed to make adjustments to make sure we were not going to be in a bad situation,” he said.

Williams was especially worried about the limited gap between seasons, which normally runs from January to August and gives players time to recover. He realized that in 2021, Sam Houston’s players might finish the season in May, return to campus in June and start playing games again in September.

He approached Keeler, who had been harboring misgivings of his own. Before the Bearkats started playing in February, he saw the wear on the players’ faces and knew it would only get worse. The chaos of the pandemic — testing and tracing, waiting and hoping — was feeding storms within, he feared, and hits would assuredly add to the toll.

Keeler, like others around Sam Houston, worried about two outcomes: injuries and a team so drained that it would not be ready to compete at a high level.

With spring football planned, outright cancellation of the fall season was not feasible or desirable. (In 2019-20, according to federal data, football was responsible for about $4.4 million of Sam Houston’s roughly $20 million in athletic revenue. More than half of all athletic income at the university comes from student fees, Williams said.)

And if a school like Sam Houston is going to field a team, it wants to play enough games to have a viable chance of winning a championship. The best option, university officials concluded, was to include an extra open week early in the season, even if that meant sacrificing a so-called money game. The Bearkats are scheduled to be off on Sept. 18 and again on Oct. 16.

Keeler said he had also adjusted workouts to respond to the exhaustion hangover from the spring; one recent practice, for instance, became a walk-through.

Apart from the notion that more repetitions often make better football players — some of the country’s most renowned programs spent the off-season dealing with the consequences of playing so few games in 2020 — there is probably little competitive risk for Sam Houston. The committee that oversees the F.C.S. postseason does not typically penalize teams for playing fewer games if it believes a lighter load is prudent. And if Sam Houston had agreed to play an 11th regular-season game and lost, its résumé might have been a little less lustrous anyway.

Indeed, there is some reason to think that an extra week off will fortify the Bearkats for what they hope will be a season that lasts into the F.C.S. title game in January. 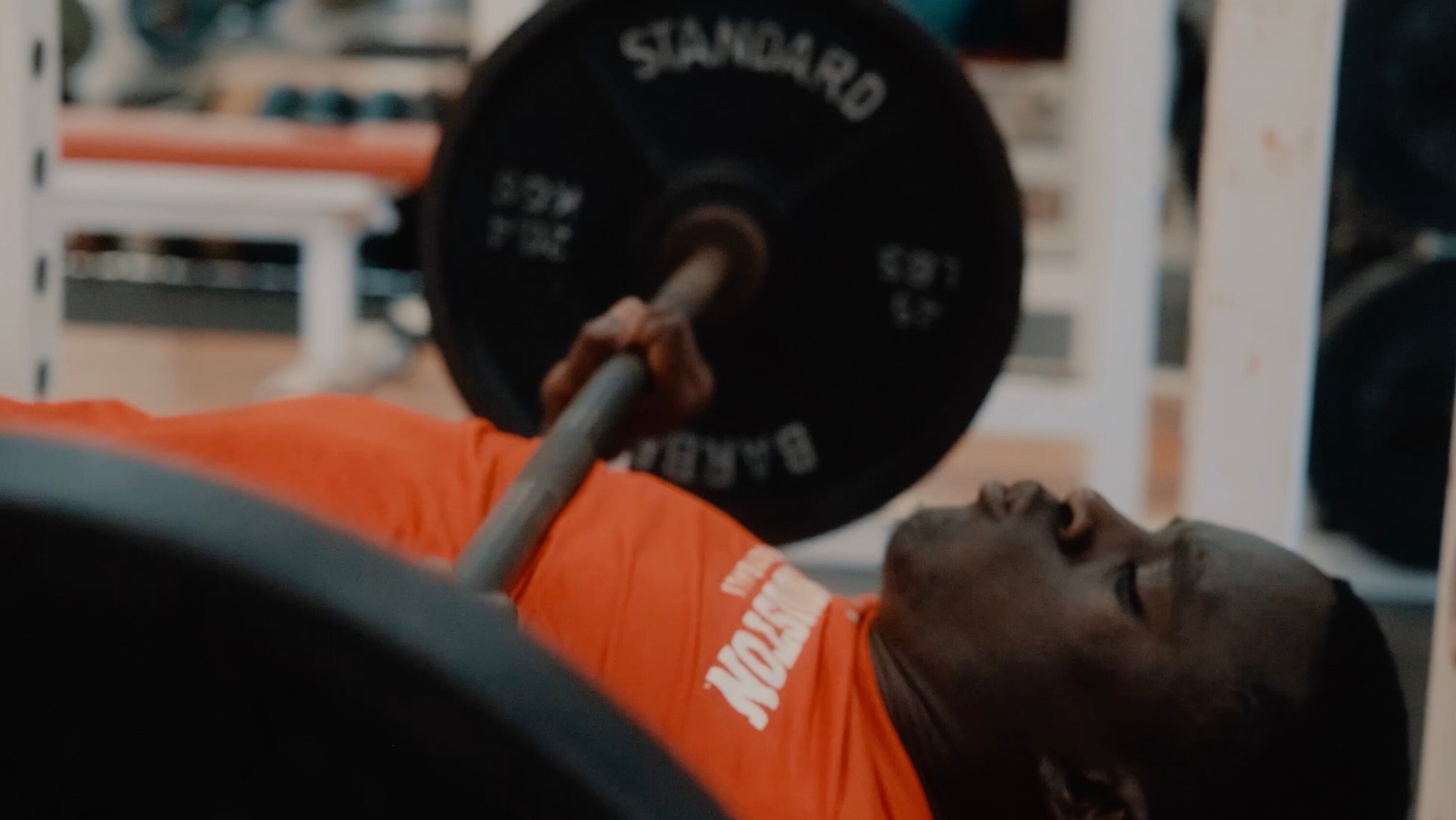 Ife Adeyi during a team lifting session at Sam Houston.

That is part of why, at a university that sporadically produces N.F.L.-caliber talent, players offered little resistance, sometimes to their own surprise.

“The less games you play, the less likelihood of you getting hurt, so I think everyone’s on board for it,” Schmid said. “In a normal year, everybody’s asking for that extra game, especially if you’re a senior. But I think we realize there’s a bigger purpose.”

In a separate interview, Ife Adeyi, a wide receiver who caught the title-winning touchdown, had a more direct assessment: “We thought it was the right move because of the wear and tear on our bodies.”

Sam Houston officials acknowledge that it will be impossible to tell with certainty how much their strategy helps players avoid injuries. Their approach to this season, they know, is unlikely to become the norm in Huntsville.

For now, though, they say they are willing to give up some college football in Texas — but hopefully just this once.

For Seasoned Soccer Travelers, No Other Trip Qualifies

The Teenagers Are Taking Over Tennis. That Might Not End Well.

The Knicks May Not Be Dreaming Big Enough
ZİYARETÇİ YORUMLARI