The veteran Broadway producer Elizabeth McCann with Jed Bernstein, president of the League of American Theaters and Producers, in 2001.Credit … 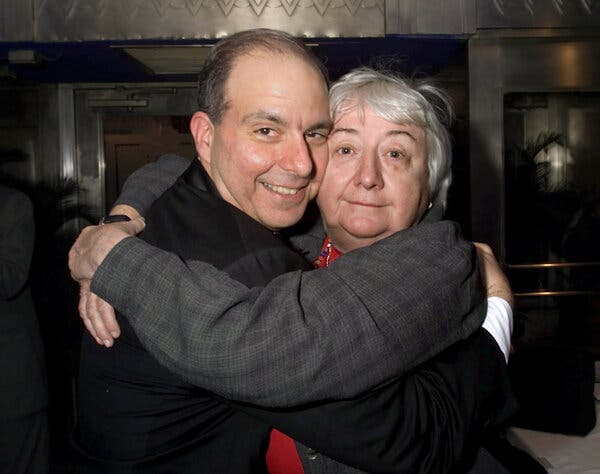 The veteran Broadway producer Elizabeth McCann with Jed Bernstein, president of the League of American Theaters and Producers, in 2001.Credit…Gabe Palacio/Getty Images

Elizabeth McCann, a theater producer known for what one journalist called her “steel and wit” who in a dizzying four-decade career won nine Tony Awards, many of them as half of McCann & Nugent Productions, and gave New York audiences more than 60 Broadway productions, including such hits as “Equus,” “Amadeus” and “Les Liaisons Dangereuses,” died on Wednesday in the Bronx. She was 90.

Her death, in a hospital, was announced by her longtime associate and friend Kristen Luciani, who said Ms. McCann had cancer.

McCann & Nugent, which Ms. McCann formed in 1976 with Nelle Nugent, had a remarkable five-year winning streak, taking the Tony for either best play or best revival every year from 1978 to 1982. The first was for “Dracula,” a sexy variation on the classic vampire story; the rest were for dramas or satires.

These included “The Elephant Man” (1979), the story of a physically disfigured man in Victorian England; “Amadeus” (1981), about the composer Antonio Salieri’s bitter musical rivalry with Mozart in 18th-century Vienna; and “The Life and Adventures of Nicholas Nickleby” (1982), an eight-and-a-half-hour adaptation, imported from London, of Charles Dickens’s 19th-century social satire.

Her producing relationship with Mr. Albee also included Off Broadway productions of “Three Tall Women,” “Painting Churches” and “The Play About the Baby.”

“Getting ahead in business means having an ability to compromise your conscience, and you get better at it the older you get,” Ms. McCann told the business newspaper Crain’s, at least partly tongue in cheek, in 2007. At the same time, she said in several interviews, she still felt a childlike thrill in being able to walk into theaters without a ticket.

Ms. McCann was honored by the Tony Awards as part of a “60 Years of Excellence” celebration in 2006. She won nine Tonys in her career, many of them as half of McCann & Nugent Productions.Credit…G. Gershoff/WireImage

Elizabeth Ireland McCann was born on March 29, 1931, in Manhattan, the only child of Patrick and Rebecca (Henry) McCann. Her father was a subway motorman, her mother a homemaker. Both her parents were born in Scotland.

Though the McCanns lived in Midtown Manhattan — Elizabeth recalled roller-skating throughout the garment district as a child — they were not a theatergoing family. Elizabeth was 14 when she saw her first Broadway show, “Cyrano de Bergerac,” starring José Ferrer; she went only because a cousin from New Jersey had an extra ticket and her mother insisted that she go. Luckily and fatefully, she said decades later, the play, for which Mr. Ferrer won a Tony, “blew me away.”

Giving some thought to teaching drama, she graduated from Manhattanville College in 1952 and earned a master’s degree in English literature from Columbia University two years later. She worked in theater for about 10 years, beginning as an unpaid intern for Proscenium Productions, a company based at the Cherry Lane Theater in Lower Manhattan. (“Eventually they paid me $25 a week,” she recalled.) Frustrated with her lack of advancement, she decided that practicing theatrical law might be a way to go.

“By the time I got out of law school, I was 35,” she recalled in 2002 in a CUNY-TV interview. After receiving her law degree from Fordham University in 1966 and passing the New York bar, she briefly worked for a Manhattan law firm and took some jobs in theater management.

Her big break was not a legal job: In 1967, she was hired by James Nederlander as managing director of the Nederlander Organization. Ms. Nugent was a co-worker there.

After teaming up to found their own firm, Ms. McCann and Ms. Nugent became general managers of six productions in their first two years together, including the original Broadway staging of “The Gin Game.” They then tried their hand at producing.

Ms. McCann with, from left, the television journalist Pia Lindstrom, former Mayor David N. Dinkins and Woodie King Jr., the founding director of the New Federal Theater, at a benefit for the theater in New York in 2011.Credit…Walter McBride/Corbis via Getty Images

Their first show, “Dracula” (1977), starring Frank Langella, ran two and a half years and won two Tonys, one for costume design and one for best revival. (The category was called “most innovative revival” that year.) Ms. McCann considered it a sign of good luck when she learned that her mother, who had immigrated from Glasgow in her youth, had sailed on the passenger liner Transylvania.

Another notable Broadway hit was “Morning’s at Seven” (1981), about four elderly sisters in the Midwest. Though seemingly bucolic, the production had its dark side. As Ben Brantley wrote in The New York Times, the play might have looked like a Norman Rockwell painting, but its soul was Edward Hopper’s.

When Ms. McCann and Ms. Nugent began their business, they were casually referred to in the industry as “the girls.” After their successes started rolling in, that changed to “the ladies.” But Ms. McCann saw gender as just one facet of a complicated picture.

“Sure, we’re women. But you could look at it another way,” she said in an interview with The Times in 1981. “Most of the men in the theater business are Jewish, and I’m Irish Catholic. You could say, ‘How the hell did an Irish Catholic — or a New Jersey Protestant like Nelle — ever get in?’”

In an industry “desperate for success and product and ideas,” she concluded, “I don’t think anybody cares as much where those things come from as they think they care.”

There were bumps along the way. Investors sued Ms. McCann and Ms. Nugent for fraud after their 1985 show “Leader of the Pack” failed to recoup its investment (the fate of some 80 percent of Broadway productions). A federal jury found the producers not guilty, and a relieved Ms. McCann told the news media afterward: “Nobody’s out to cheat investors. God knows it’s hard enough to find them.”

After the partners went their own ways — Ms. Nugent pursued a solo career as well and went on to produce many shows on Broadway — they had a brief reunion in 2002, jointly producing the dark comedy “The Smell of the Kill” at the Helen Hayes Theater. It was not a success and closed after 60 performances.

She never married and leaves no immediate survivors.

Her last producing credit was Martin McDonagh’s “Hangmen,” which had been scheduled to open on Broadway on March 19, 2020, but closed after 13 previews, along with every other Broadway production, because of the Covid-19 pandemic.

Ms. McCann’s producing philosophy was simple. “Producing is really about insisting that everybody pay attention to detail,” she told The Times in 1981. “The Titanic probably sank because nobody ordered binoculars for the crow’s nest.”