Matthew Stafford Wants His Hollywood Ending. So Do the Rams.

Atlanta Blasts Its Way to a Win, but Loses an Ace

The Yankees Aren’t Bad, They are Ordinary

Lloyd Harris Takes His Long-Distance Fan Club Into the Quarterfinals

Mardy Fish Can Relate to What Naomi Osaka Is Going Through

HOUSTON — Never in his life has Eddie Rosario looked this good at the plate. And that’s not just a matter of his numbers in a torrid eight days …

HOUSTON — Never in his life has Eddie Rosario looked this good at the plate. And that’s not just a matter of his numbers in a torrid eight days that saw him named the most valuable player of the National League Championship Series, pushing the Atlanta Braves into their first World Series since 1999.

He’s also looking especially sharp because he has his personal barber in tow just as the spotlight shines its brightest.

“Eddie’s like my family,” said Andy Duran, who is known to the players as “Andy Fade” and who started grooming heads with the Minnesota Twins in 2013 and now works with many players in the majors. “That’s why we’re here. I do his hair, all his lines and all his beard.”

Rosario, 30, has been full of surprises this month, becoming one of only five players in postseason history with at least 14 hits in a single series — and the only player to do it in just six games. The Yankees’ Hideki Matsui (2004 A.L.C.S.), the St. Louis Cardinals’ Albert Pujols (2004 N.L.C.S.), the Boston Red Sox’ Kevin Youkilis (2007 A.L.C.S.) and the San Francisco Giants’ Marco Scutaro (2012 N.L.C.S.) each needed seven games to get there.

Rosario accomplished all this while getting a trim on the go every three days — or, according to the playoff schedule, roughly every other game.

“No wonder he’s lined up and looks so good,” said Atlanta third baseman Austin Riley, who professed to have no idea that the quiet Rosario, along with much of his family, is traveling with his barber. “Whatever gets the knocks. He comes up big for us. Do what you’ve got to do.” 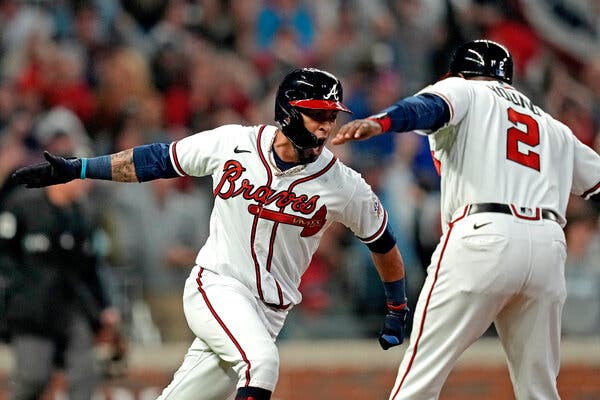 Eddie Rosario, left, was on a tear throughout the division series and the N.L.C.S. His three-run homer against the Dodgers in Game 6 was the biggest hit of all.Credit…Dale Zanine/USA Today Sports, via Reuters

That was the strategy General Manager Alex Anthopoulos followed when he acquired Rosario in a trade with Cleveland on July 30. Atlanta had lost its star outfielder Ronald Acuña Jr. to a knee injury and was also without Marcell Ozuna, who was under investigation after an arrest on charges of domestic violence. Regardless, the weak N.L. East was up for grabs, and Anthopoulos rebuilt his outfield on the fly.

Rosario was battling an abdominal injury at the time and wouldn’t play for Atlanta for nearly a month, but there was a method to Anthopoulos’s dealing.

“He’s been around a long time, and he had gotten off to a slow start in Cleveland,” Anthopoulos said. “He had just started to swing the bat well. He was available, and we needed a lot of bodies. Clearly, a lot of guys were hurt.

“He was a contact bat, and in the playoffs there is a lot of swing-and-miss stuff that you’re facing. To put the ball in play is a big deal.”

Rosario has shown a knack for that since breaking into the majors with the Minnesota Twins in 2015. Not only did he hit a home run off Oakland’s Scott Kazmir in his major league debut on May 6 of that year, but it was an opposite-field drive on the first big-league pitch he saw.

Andy Duran, left, a barber who goes by the nickname Andy Fade, works with Eddie Rosario and other major leaguers.Credit…Andy Duran
“Eddie’s like my family,” Duran said. “That’s why we’re here. I do his hair, all his lines and all his beard.”Credit…Andy Duran

“We knew he was a swinger because I was with him in spring training,” said Torii Hunter, who was in the final season of his 19-year career and in the Twins lineup as the designated-hitter that day. “So I was like, ‘Wow, he’s definitely swinging at the first pitch here.’ But I didn’t think he’d go deep. I was like, ‘Oh my God.’

Rosario wound up leading the majors in 2015 with 15 triples, the most for a rookie since Ray Lankford had 15 in 1991 with the Cardinals. He also led all rookies in outfield assists (16).

He established himself as an everyday player in 2017, batting .290 with 27 homers and 78 R.B.I. Then he blasted a two-run, first-inning homer against Luis Severino at Yankee Stadium in that year’s A.L. wild-card game. That paired him with Gary Gaetti as the only players in baseball history to homer in their first regular-season at-bats and in their first postseason at-bats.

“No question he likes the big stage,” the Hall of Famer Paul Molitor, who was Rosario’s manager at the time in Minnesota, said via text.

“He never saw a pitch he didn’t like,” Torii Hunter said of Rosario’s early days with the Minnesota Twins, who gave him a celebratory shower after his first game, when he homered on the first pitch he saw as a big leaguer.Credit…Hannah Foslien/Getty Images

A native of Guayama, Puerto Rico, Rosario was picked by the Twins in the fourth round of the 2010 draft. His career briefly stalled when he received a 50-game suspension for violating terms of M.L.B.’s drug treatment program when he tested positive for an unspecified “drug of abuse,” but it didn’t take him long to rise to the majors afterward.

“I met Mr. Molitor when Eddie was in the minor leagues, and these were his words: ‘You’ve got a special kid,’” Eddie Rosario Sr. said on the field at Truist Park late Saturday night after Atlanta clinched its World Series berth. “And we do have a special kid.”

Rosario’s penchant for producing on the big stage has not surprised his father.

“He’s got a big heart,” Eddie Sr. said. “He plays with his heart. He plays for his teammates, for his teams and he likes to win.”

In an especially meaningful moment, Rosario scored the winning run for the Twins in the 16th inning during a series against Cleveland in San Juan’s Hiram Bithorn Stadium in 2018. He also teamed with Carlos Correa, Francisco Lindor, Javier Baez, Carlos Beltran, Yadier Molina and others to help push Puerto Rico to the title game of the 2017 World Baseball Classic before losing to the United States. Rosario batted .316 during the W.B.C.

“Great guy to be around, I love him,” Correa said Monday at Minute Maid Park as the Astros worked out in preparation for Game 1. “He was a great teammate. Obviously, he’s a heck of a talent. I’m super excited I get to see him here again on the biggest stage of baseball.”

Correa still chuckles at the memory of Rosario’s son, Raydieliz, at the W.B.C.

“He was in love with my wife,” Correa said of Raydieliz. “He wanted to be sitting with my wife on the bus, on the plane, at the games, everywhere. He’s so cute.”

Even though they are rivals at the World Series, Correa said, he would be fine with a reunion between his wife, Daniella, and Raydieliz.

“He can sit with her and entertain her,” Correa said. “She’s pregnant now, so she needs some belly rubs.”

Despite his talent, Rosario has been available twice within the last year, first when the Twins declined to offer him a raise that would have renewed his contract after the 2020 season and again when Cleveland traded him. It’s possible his October heroics can be explained partly as a reaction to his ongoing drive to prove himself.

Rosario celebrated Atlanta’s N.L.C.S. win with his friends and family on the field at Truist Park on Saturday.Credit…Michael Zarrilli/Getty Images

“I feel like I’ve had a good first half of my career,” Rosario said via a translator, Franco Garcia, after winning the N.L.C.S. M.V.P. “I feel like I was vying for two All-Star appearances. I feel like I deserved them. That didn’t happen, so I kept just vying for the next award or accolade, and this was it. But that’s just the way I play. I want to illustrate the type of ballplayer that I am.”

He bashed the Los Angeles Dodgers with a .560 average (14 for 25), three homers and nine R.B.I. He racked up 26 total bases during the six games, to go with six runs scored and a stolen base.

“We just couldn’t figure him out,” Dodgers Manager Dave Roberts said. “He beat us the other way. He beat us to the pull side. He got hits off lefties, off righties. We tried to spin him. We went hard. We just didn’t have an answer for him.”

Now it is up to the Astros to find an answer. Because nobody is looking better right now than Rosario.

“I have not met his barber,” Atlanta starter Max Fried said. “He does look great all the time, though. He never has a hair out of place.”

After hitting .308 in the division series and .560 in the N.L.C.S., Rosario will face sky-high expectations in the World Series. He won’t surprise anyone this time.Credit…Kevin C. Cox/Getty Images
ETİKETLER:
GameHeLi̇kePlaySai̇d
BU KONUYU SOSYAL MEDYA HESAPLARINDA PAYLAŞ
Tweetle

A Street Basketball Mecca Gets a Face-Lift

The Yankees (Mostly) Control Their Fate on Season’s Final Day

Kevin Garnett Talks Missed Opportunities, On and Off the Court