How One Principal Got Students Back to a Bronx Public School

Border With Canada to Open, and North Country ‘Could Not Be Happier’

He’s Bobby V, and He Wants to Be Mayor

It’s Thursday. We’ll look at something some New Yorkers hear too often — noise from helicopters. We’ll also celebrate the dedication of the …

It’s Thursday. We’ll look at something some New Yorkers hear too often — noise from helicopters. We’ll also celebrate the dedication of the Statue of Liberty 135 years ago today. 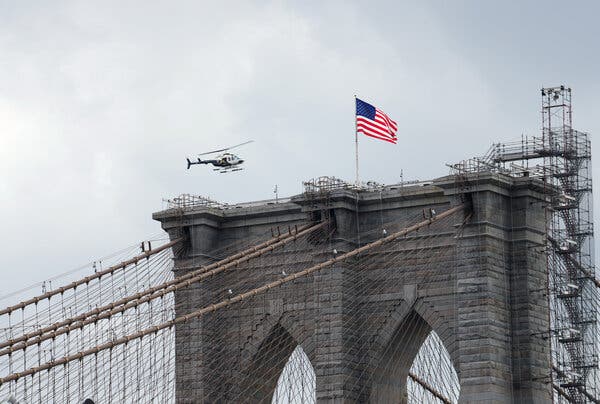 Noise complaints about helicopters have surged since the pandemic changed the soundtrack of the city. For months last year, the city was quieter — and people noticed when sightseeing helicopters returned, especially on Sundays.

The city banned copters from using city landing pads on Sundays several years ago. The idea was to give residents a day of urban serenity. A day without the unmistakable thwup-thwup-thwup of rotors beating the air.

But my colleagues Patrick McGeehan and Michael Gold write that serenity has been elusive. Helicopters come and go hundreds of times on weekdays — and more than 150 times on some Sundays.

New Yorkers have long lived with some level of noise, but the coronavirus prompted many to rethink their relationship to it — and to complain about sounds they might once have tolerated.

“It’s a lot of people whose apartments lie in the flight path and people who now work at home,” said Mark Levine, a city councilman who represents parts of northern Manhattan.

The jump in calls coincided with a resurgence of sightseeing flights. While most companies offering aerial tours of the city have suffered financially, there is one exception — NYONAir.

The company, also operating as FlyNYON, is known for two things: doors-off tours that let customers dangle their feet out of open helicopters to take “shoe selfies,” and a 2018 crash in which five passengers drowned in the East River.

After the crash, the Federal Aviation Administration banned the type of harnesses that NYON used at the time. But doors-off tours continued, and New Jersey-based NYON and other operators from outside the city are free to fly over New York at low altitudes. They were unaffected by a deal that the city struck with New York-based tour companies several years ago, limiting routes and banning the Sunday flights.

NYON and Helicopter Flight Services, which offers flights over Central Park from Linden, N.J., did not respond to several requests for comment.

But Stacey Shub, who lives near the South Street Seaport in Lower Manhattan, said that flights that circle city landmarks have not stopped. She said her heart speeds up when she hears the roar of helicopters.

“It feels like an elephant is sitting on my chest,” she said, adding that she no longer bothers calling 311 because complaining has been fruitless.

An Oath Keeper runs for State Assembly in New Jersey

Edward Durfee Jr. is an active member of the far-right Oath Keepers militia. He was outside the Capitol during the attack on Jan. 6.

As my colleague Tracey Tully writes, Durfee is also running for the New Jersey State Assembly as a Republican.

Durfee, a 67-year-old tech consultant and former Marine, said he went to Washington in January to “stop the steal” of the 2020 presidential election. He champions the principles of the Oath Keepers, more than 20 of whose members have been charged in connection with the Jan. 6 rampage. But he condemned the violence and said he did not set foot inside the Capitol.

Durfee is more than just a long-shot fringe candidate. He also leads the Republican committee in the town where he lives, Northvale — underscoring the extent to which right-wing activism has become increasingly mainstream within the G.O.P., even in a Democratic stronghold like Bergen County.

Durfee, who ran unopposed in the primary, has not received support from the state Republican Party and has little money to spend on his campaign against two Democratic Assembly candidates. And he has few illusions of actually winning.

“I’m an oxymoron in government,” he said. “I’m on the ballot because nobody challenged me. There’s that lack of participation among our citizens.”

Letitia James is preparing an announcement on a run for governor

Letitia James, New York’s attorney general, is preparing to announce that she will run for governor, according to six Democratic leaders briefed on her plans. In recent days, she and her advisers have told Democratic and labor union allies that she intends to challenge Gov. Kathy Hochul in next year’s Democratic primary.

Netflix looks to a former Army base in New Jersey

Netflix plans to bid on a 289-acre chunk of a former Army base in New Jersey, hoping to transform it into one of the biggest film and television production hubs in the Northeast. Gov. Philip Murphy supports the plan for Fort Monmouth, about 50 miles from Manhattan. It was closed in 2011 as the military trimmed spending.

Enjoy a mostly sunny day in the upper 50s before the clouds roll in and temps drop to high 40s at night.

Nodding, wobbling tributes to the Statue of Liberty for an anniversary

On a gloomy, miserable morning 135 years ago today, bugles blared, crowds cheered and the Statue of Liberty was dedicated. The New York Times called it “a great holiday to be remembered” — and it is being remembered by the National Bobblehead Hall of Fame and Museum.

“We think bobbleheads are the ultimate honor,” said Phil Sklar, a founder and chief executive of the hall of fame. “We were really careful, making sure it’s accurate, something that’s a symbol for people to have on their desks.”

But he doubted that sales of the statue, at $30 apiece or $50 for both, will rival those of the hall of fame’s best-selling subject, Dr. Anthony Fauci. Nor are the hall of fame’s Statue of Liberty bobbleheads the only ones on the market. Walmart sells one that is eight inches tall — the same height as the ones from the hall of fame.

The hall of fame has also produced bobbleheads of what Sklar called “the 18 neglected presidents” — those former Oval Office occupants who had never been immortalized with their own bobbleheads. Among them was Grover Cleveland, who attended the statue’s 1886 dedication and delivered a speech praising its promise of liberty.

“She holds aloft the light which illumines the way to man’s enfranchisement,” Cleveland declared, but a National Park Service website notes that “for people in the United States with limited liberty, it was a day to call out the hypocrisy.” By then, 23 years after the Emancipation Proclamation, Jim Crow laws were being enacted to subjugate Black Americans. “‘Liberty enlightening the world,’ indeed,” said the Black-owned Cleveland Gazette, referring to the statue’s formal title. “The expression makes us sick.”

She let me go. Suggested
I go.
Solo.
It never would have occurred to me.

Ignore hustlers. Wait on the subway steps, not the platform. Walk with purpose.
Advice gratefully received.

FWOPP! We burst into the tunnel
ears popping as we
rickety, rickety under Manhattan.

At Penn Station, doors yawn, ejecting us.
We shuffle and clump, scatter and weave,
bump and

I hold Mom’s hand-drawn map,
a grid on lined loose-leaf.

I am here.
Alone.
Independent.
Invincible.

When Your New York Kid Is in the Olympics, You Find a Way to Watch

A study confirms a small risk of blood clots after vaccines, but not as high as the risk Covid brings.