The Astros, and Their Star Player, Get Back on Track

A Track Built for Speed Is Already Producing Records

Kyle Lowry Is Ready to Have His Say, On and Off the Court

Told to ‘Find Arthur,’ I Stumbled Upon My Future at the U.S. Open

In Battle of Rivals, the Dodgers Outlast the Giants to Reach the N.L.C.S.

How to watch tonight’s game.

Houston’s Shortstop Was Right on Time With Go-Ahead Homer

Serena Williams Is Not at the U.S. Open, but Her Coach Is Everywhere
Anasayfa » Spor » Baseball, Popular but No Longer Dominant, Seeks to Reclaim Its Cool

Baseball, Popular but No Longer Dominant, Seeks to Reclaim Its Cool 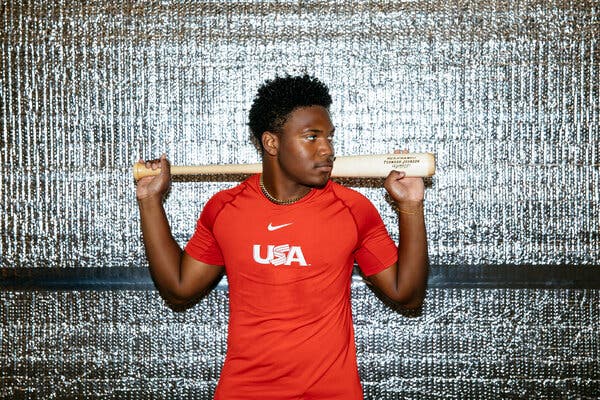 Termarr Johnson of Atlanta is one of the top amateur baseball prospects in the country.Credit…Kendrick Brinson for The New York Times

BOSTON — Across the United States, baseball, long considered the national pastime, is still popular by most measures. Millions go to games each year, millions more watch on television, and quite a few will turn their attention to the Fall Classic — the 117th World Series — which begins on Tuesday in Houston.

Termarr Johnson, perhaps the best amateur shortstop prospect in the United States, will certainly be watching. But if you ask him whether his high school classmates in Atlanta are following the sport that is likely to make him a top draft pick next year, Johnson doesn’t kid himself.

“They’re more into football and basketball,” he said. “But that’s OK. I still love baseball.”

Baseball, for all its storied past, no longer occupies a central role in the national consciousness, based on measures like game attendance in recent years and social media relevance. By now, the reasons are familiar: The game competes with myriad sports and entertainment options that did not exist decades ago, and the methodical pace of play alienates some potential fans.

But just as concerning for the game is that many young people believe it is not cool — that it is the exclusive domain of nostalgic old men and data geeks. And a big reason is its tenuous relationship with the audience that, for generations, has helped define what cool is.

Students of American culture know that since the early Jazz Age much of what has been considered “cool” and “hip” — including those very words — traced back to Black creators and tastemakers in fashion, literature and music, including jazz, soul and hip-hop.

“The idea that Black is cool, right up through hip-hop culture and fashion, is such an integral part of our American culture, and what is cool to youth culture,” said Matthew Briones, an associate professor of American history at the University of Chicago who specializes in African American culture and baseball history. “It’s a problem if you are not able to get a more diverse and younger audience.”

Johnson, right, in a batting cage with his friend RJ Austin in Atlanta.Credit…Kendrick Brinson for The New York Times

That is important to M.L.B. because baseball has steadily lost its appeal to many Black Americans, who do not see as many Black players on the field as they did years ago.

In 1981, over 18 percent of major league players were Black. That figure held until 1986, when it began a steady decline. While almost 30 percent of M.L.B. players in 2021 were Latino, only 7 percent were Black, and as a result, the sport seems more disconnected from Black audiences than in decades past.

Those issues, combined with criticisms of how the game is played on the field today and how it compares with faster-paced alternatives, is threatening to shrink the game’s appeal even further. Major League Baseball, under Commissioner Rob Manfred, is redoubling efforts to reverse those trends, and this World Series could be the last before fundamental changes are enacted.

Manfred appointed Theo Epstein, the star executive who guided both the Boston Red Sox and Chicago Cubs to World Series championships, to test methods that would speed up the game and make it more exciting.

Manfred also promoted Tony Reagins, an M.L.B. executive who had been the general manager of the Los Angeles Angels, into a role to help bring Black America back to the sport.

“We need more African American players at the highest level,” said Reagins, who is Black.

The Hall of Fame slugger Reggie Jackson was among the most charismatic megastars in the game during the peak of its Black representation, even inspiring a candy bar named after him. But a few generations later, most Black athletes have chosen other paths.

“Where are the minorities in baseball?” said Jackson, now a special adviser to the Houston Astros. “I think that’s definitely part of it, where you don’t have the great Black athlete playing baseball. They are going to other sports.”

There are many reasons, but even baseball’s leaders acknowledge that the sport has not done enough to draw in Black fans and develop Black players. The game’s power structure is still mostly white, and many of its traditions, from discouraging bat-flipping to the song “Take Me Out to the Ball Game,” originated in a time when the game was segregated.

“Baseball needs to reach out more effectively to nonwhite middle-class men,” said Seth S. Tannenbaum, a visiting assistant professor of history at Lesley University who teaches a course on the history of the United States through a baseball lens. “If going to the ballpark felt like a more comfortable experience for people of color and women, I think they could grow their audience more.”

The stands at Dodger Stadium during a playoff game on Wednesday.Credit…Michael Owens for The New York Times

In a world where a sport’s status can be measured on social media and in endorsement dollars, it is basketball icons like LeBron James, Kevin Durant and Stephen Curry, football heroes like Tom Brady and Patrick Mahomes and even international soccer stars who captivate the American imagination and dominate the public discourse, the way Jackson did in the 1970s and ’80s.

On the list of the most followed sports Instagram accounts, the first baseball player is Mike Trout of the Los Angeles Angels at No. 130, with 1.9 million followers.

There are 25 basketball players and nine football players ahead of Trout on the Instagram list. The account for U.F.C., a mixed martial arts organization, ranks sixth, and W.W.E., a staged wrestling competition, is seventh. Major League Baseball’s general account is 33rd, with 6.8 million followers.

Johnson, the high school star from Atlanta, who is African American, attends games in Atlanta whenever someone offers him tickets, he said, but he is most interested in playing the sport, as are millions of other kids, who still play baseball at higher rates than football.

Johnson, 17, grew up playing soccer, basketball, golf and baseball with his older brothers and friends. His favorite athlete was the basketball legend Kobe Bryant, and at an early age Johnson was better at hoops than baseball.

A key moment came when he was 13 and was introduced to one of M.L.B.’s new programs designed to enhance the visibility of and participation in baseball in inner cities.

Led by Reagins, the initiatives are designed to both introduce the sport to disadvantaged young people of all races and ethnicities, especially Black kids, and to develop talented players and get them into colleges or even the major leagues.

Such programs, like the Breakthrough Series, the Hank Aaron Invitational and the Elite Development Invitational, are free and are producing elite players who could not have afforded to play on expensive travel teams or to hire private coaches.

Reagins recently helped introduce an outreach program to Black churches, aiming to get more kids playing in an informal setting.

“One thing we kept hearing from them was, ‘We didn’t know you cared,’” Reagins said. “We are going to have quality talent that is predominantly African American surface at the college level and major league levels. We are already starting to see that now.”

Several current major leaguers, like Dominic Smith and Devin Williams, have gone through the programs, as did Johnson and Ed Howard, the top draft pick of the Cubs in 2020.

Briones, the University of Chicago professor, said what baseball could really use is a transcendent Black star to increase the sport’s visibility among Black Americans. Johnson strives to be just that.

“That’s the goal,” he said. “I’ve heard all the old stories about Reggie Jackson and Ken Griffey Jr., really amazing players and role models, guys who look like me. It’s important to get back to those times, and I’m proud to be a part of it.”

Reggie Jackson with fans before a game in 1969, when he played for the Oakland A’s.Credit…AP

Baseball faces challenges with all demographics in part because of the evolving structure and pace of the game. In recent years, critics say, it has become bogged down by strikeouts, extreme defensive shifts and overpowering pitchers, putting less emphasis on the athletic wizardry of fielders.

Amid a preponderance of statistical data streams — known as analytics — the game has lurched toward more strikeouts, walks and home runs as fewer balls are put into play within the field. Baseball has become more like bowling, in which there are a limited number of outcomes on every roll. All of it could help explain the dip in attendance that began in 2008, long before the pandemic drove it down further.

So, for the past year, Epstein and his team have explored ways to make the game more entertaining, while preserving its essence. They are experimenting in the minor leagues with the size and shape of the strike zone, with larger bases to reduce the space between them, all to help get the ball in play more, enhance the pace of the game and force it to be played more the way it was in the 1970s and ’80s, when it relied more on the instincts of the players and less on data calculations from the front office.

Baseball might also introduce an aggressive pitch timer, ensuring that all pitches are thrown within 15 seconds, or 17 seconds with a runner on base. Other innovations designed to enhance the role of the starting pitcher are being explored, too. Most of these adjustments would require approval from the powerful players union, and might never be implemented. But the willingness to tinker with some of the longstanding rules of the game demonstrates a concern that baseball, while still enjoyed by millions, is in danger of fading even more from the national conversation.

“Baseball is the greatest game in the world, but significant changes in the way the game has evolved on the field over the last decade have diminished aspects of the game fans consistently tell us they love the most,” Epstein said in a text message. “The goal,” he added, “is to move closer to the very best version of baseball.”

Naomi Osaka and Andy Murray are among the players to watch on Monday.

Scottish Soccer’s Brexit Problem: No Way In, and No Way Out

Why Lia Coryell, the Paralympic Archer, Is Still Here