Antony Hewish, Astronomer Honored for the Discovery of Pulsars, Dies at 97

Antony Hewish in an undated photo. His Nobel Prize citation, for his “decisive role in the discovery of pulsars,” attracted criticism because … 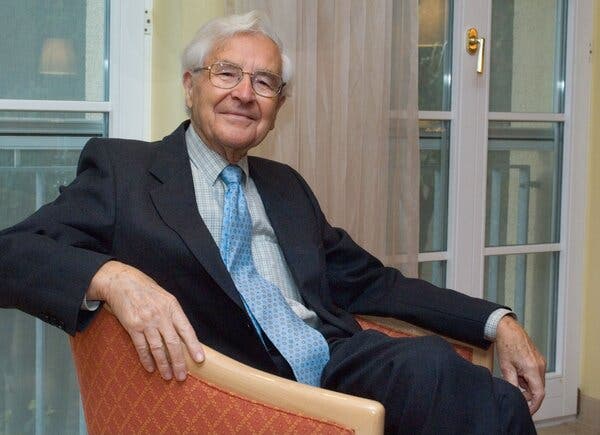 Antony Hewish in an undated photo. His Nobel Prize citation, for his “decisive role in the discovery of pulsars,” attracted criticism because pulsars had first been detected by a graduate student he supervised.Credit…aslu/ullstein bild via Getty Images

Antony Hewish, a pioneer of radio astronomy and a discoverer of a surprising class of stars known as pulsars, for which he was awarded a Nobel Prize, died on Monday. He was 97.

His death was announced by the University of Cambridge in England, where he had taught for many years. The announcement did not say where he died.

Pulsars, or pulsating radio stars, are the embers of massive stars that have exploded as supernovas. Dr. Hewish built a radio telescope that, though designed for other purposes, happened to have just the right properties to detect rapidly varying radio waves — the signature emission of pulsars.

He shared the 1974 Nobel Prize in Physics with another radio astronomer, Martin Ryle, his longtime friend and collaborator at Cambridge. But the Nobel committee’s citation of Dr. Hewish, for his “decisive role in the discovery of pulsars,” attracted criticism. The astronomer Fred Hoyle noted that the signals from the first two pulsars had in fact been detected and analyzed by Jocelyn Bell, a 24-year-old Cambridge graduate student who was working on the new telescope. Dr. Hewish was her supervisor and doctoral thesis adviser.

Her finding was kept secret for six months while her superiors “were busily pinching the discovery from the girl, or that was what it amounted to,” Dr. Hoyle wrote in a letter to The Times of London.

Other astronomers noted that Ms. Bell’s assigned task had been to plot twinkling radio sources, but that she had noticed and pursued a different kind of signal.

“Jocelyn was a jolly good girl, but she was just doing her job,” Dr. Hewish told an interviewer for the journal Science after Dr. Hoyle’s criticisms became public in 1975. “She noticed this source was doing this thing. If she hadn’t noticed it, she would have been negligent.”

Antony Hewish was born in the small seaside town of Fowey, in Cornwall, England, on May 11, 1924. His father was a banker. He started studying science at Cambridge in 1942 but was diverted during World War II to a Royal Aircraft Establishment research team, to work on designing ways to jam the radar of German fighter planes at night.

Dr. Hewish in 1961. He was long associated with the University of Cambridge and for a time headed the Mullard Radio Astronomy Observatory near Cambridge.Credit…Evening Standard/Hulton Archive/Getty Images

The leader of the team was Dr. Ryle, who after the end of the war began a distinguished career in developing radio astronomy at Cambridge. Dr. Hewish joined his group and became interested in determining which of the several thousand radio-emitting galaxies that Dr. Ryle had discovered were quasars.

Quasars, now known to be supermassive black holes, were at that time recognized as point sources of radio waves, as opposed to broad sources like radio galaxies. Quasars’ radio signals flicker in intensity as they pass through the solar wind. Dr. Hewish designed a special kind of radio telescope to detect those twinklings, which was completed in 1967.

He set Ms. Bell to scan the recordings produced by his telescope, and to distinguish the true stellar twinklings from artificial sources of interference, like pirate radio stations or aircraft altimeters.

The telescope churned out about 400 feet of paper charts for each full coverage of the sky. In October 1967, Ms. Bell noticed a blip, occupying half an inch, that seemed neither human-made nor stellar. She remembered that she had seen a blip with the same shape in a recording from almost 24 hours earlier. Further analysis showed that the blips consisted of highly regular pulses, just over a second apart.

Jocelyn Bell in 1968. A year earlier, as Dr. Hewish’s research assistant at the University of Cambridge, she detected and analyzed the first signals sent by pulsars. Her contributions were not recognized by the Nobel committee.Credit…Daily Herald Archive/SSPL/Getty Images

The extreme regularity of the pulses pointed to some kind of manufactured source. But Dr. Hewish then established that the source was appearing not every 24 hours, but every 23 hours 56 minutes. It was keeping pace with the rotation of the stars, not Earth, and so it must have been extraterrestrial.

Astronomers are well aware that if there is intelligent life beyond Earth, they will probably be the first to know about it. This sidereal beacon with its precisely timed signal was so unexpected that no explanation could be ruled out, including the possibility that it was an intentional signal.

Only partly in jest, the source was named LGM-1, for “little green men.” Dr. Hewish later said in an interview that for a period of two months he believed “it was possible that the signal might be coming from aliens.”

While her elders were debating how they could publish the discovery without having any idea what it was, Ms. Bell made a decisive finding. She detected a second such source, this one emitting regular pulses but at a different rate. It seemed unlikely that two sets of extraterrestrials would be signaling Earth at different frequencies, so the source was more likely a new kind of star.

Dr. Hewish confirmed that there was no Doppler shift in the signal, as would be expected if the source were on a planet circling its sun. (The Doppler shift is the phenomenon that makes a train whistle, for example, appear to change in frequency as it passes an observer.)

The discovery of pulsars, kept a closely guarded secret by the Cambridge radio astronomy group, was published in the journal Nature on Feb. 24, 1968. By scientific convention, when a student makes a discovery that a professor’s intellect and instruments had made possible, the student’s name is put first on the authorship line and the professor’s last, with other helpers in between.

Dr. Hewish explained the use of a spectroscope to children attending a lecture in London in 1965.Credit…Keystone/Hulton Archive/Getty Images

If this convention had been followed, Ms. Bell and Dr. Hewish would have been presented as joint discoverers of the remarkable new stars. But the Nature paper listed Dr. Hewish as the first author, followed by Ms. Bell, then several minor contributors. The implication, persuasive to the Nobel committee, was that Dr. Hewish had been the sole discoverer. (Dr. Ryle, who shared that year’s Nobel, was cited for his development of revolutionary radio telescopes that paved the way for the discovery of pulsars.)

Unlike the Nobel committee, the Franklin Institute of Philadelphia awarded a prize for the discovery of pulsars to Ms. Bell and Dr. Hewish jointly in 1973. That judgment was followed by most other accounts. In 2018, Ms. Bell, by then Dr. Bell Burnell, was awarded the $3 million Breakthrough Prize in Fundamental Physics for her work on pulsars. (The foundation that sponsors the prize was established by the Google co-founder Sergey Brin and the Facebook co-founder Mark Zuckerberg, among others.)

Dr. Hewish was professor of radio astronomy at the Cavendish Laboratory in Cambridge from 1971 to 1989 and head of the Mullard Radio Astronomy Observatory near Cambridge, founded by Dr. Ryle, from 1982 to 1988.

Survivors include his wife, Marjorie, whom he married in 1950.