Before Renovating, They Had to Get Rid of the Current Occupants: Mice

At Central Park Tower, More Big Closings Are Recorded
Anasayfa » Sağlık » A Sprawling Co-op at the Majestic Is Listed for $25 Million

The sprawling Upper West Side apartment where the footwear executive George Malkemus had lived with his husband and business partner, Anthony …

The sprawling Upper West Side apartment where the footwear executive George Malkemus had lived with his husband and business partner, Anthony Yurgaitis, is coming to market for the first time in nearly two decades.

The asking price is $25 million, with $13,781 in monthly maintenance, according to John Burger, a broker with Brown Harris Stevens, which is marketing the property.

The listing comes almost a month after the death of Mr. Malkemus, who, along with Mr. Yurgaitis, ran the high-end shoe brand Manolo Blahnik in the United States for 37 years.Mr. Malkemus also helped the actor Sarah Jessica Parker, who wore countless pairs of “Manolos” on and off the set of “Sex and the City,” start her own footwear line.

The co-op apartment occupies the northeast corner of the 18th floor at the Majestic, the twin-towered, prewar skyscraper at 115 Central Park West, between 71st and 72nd Streets. It is a combination of two units acquired by the couple in 2002 and 2004, then meticulously combined with the help of the architect Annabelle Selldorf.

“We fully reconfigured the entire space,” Mr. Yurgaitis said in an email, calling it “the ultimate New York home.”

“The moment I stepped foot in our new home,” he said, “I felt absolute joy.”

But Mr. Yurgaitis says he has decided to sell the apartment because he is spending much less time there. His primary residence is now at Arethusa Farm, the 300-plus-acre dairy farm in Litchfield, Conn., that the couple had purchased in 1999. The business has since grown to include a full line of dairy products sold at its retail shops and restaurants. 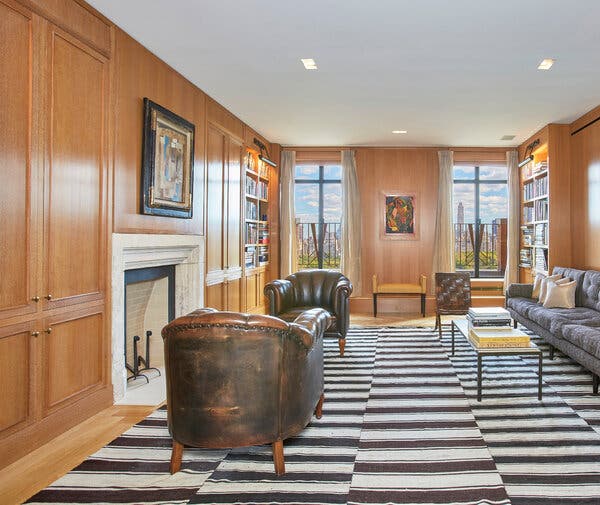 One of the four main bedrooms is currently being used as a library. It features a decorative fireplace and a terrace.Credit…Mike Tauber

The Manhattan home encompasses around 5,000 square feet. It features four main bedrooms, one of which is being used as a library, with a decorative fireplace and wood paneling; four full bathrooms; two powder rooms; staff quarters; and a study/sitting room that could be converted into a fifth bedroom.

There are also four terraces, lined in bluestone and totaling around 850 square feet, that provide stunning views of Central Park as well as the neighboring Dakota apartment house.

“It feels like a penthouse,” Mr. Burger said, “though technically it’s not a penthouse.” He said being on the 18th floor of the Majestic “has to be the most perfect spot. You get that perfect relationship between park, skyline and sky. If you’re too high on Central Park, you’ve lost the park when you sit down.”

The large eat-in kitchen is equipped with stainless-steel appliances, cabinets and countertops.Credit…Mike Tauber

From a private elevator landing, the apartment is entered into a foyer and gallery. At the north end is a living room with a decorative fireplace and a music room/library, situated side by side. Each has French doors that open to a terrace. The northern portion also includes a formal dining room, with a terrace, the powder rooms, and a large eat-in kitchen clad completely in stainless steel, as well as wine storage. Off the kitchen is a laundry room and the staff quarters.

A foyer off the gallery leads to the apartment’s south end, which contains the bedrooms. The enormous primary suite, also with a terrace, has a sitting room, dual bathrooms of dark marble, two spacious dressing rooms, a walk-in closet and a wet bar. Two of the other spacious bedrooms have en-suite bathrooms of light Carrara marble.

Throughout the apartment are light oak floors in a herringbone pattern, oversize windows and nearly 10-foot ceilings.

At the south end of the apartment are the bedrooms. The enormous primary suite features a terrace.Credit…Mike Tauber

Mr. Yurgaitis says the main bedroom suite was his favorite part of the apartment. “It really is a home within a home,” he said. He especially appreciated the terrace there. “I always enjoy stepping out with my morning coffee and a paper,” he said, “and once the stars come out, an evening cocktail on the terrace is always the perfect nightcap.”

Manolo Blahniks were a little-known shoe brand before Mr. Malkemus became involved with the company.Credit…Lauren Fleishman for The New York Times

He and Mr. Malkemus also enjoyed entertaining at the apartment over the years. “We held many wonderful dinner parties,” he said.

The Art Deco-style Majestic, 32 stories high, was completed in 1931 just steps from Central Park and converted to a co-op in 1958. Notable residents there have included the actors Milton Berle and Zero Mostel, the fashion designer Marc Jacobs and the comedian Conan O’Brien.

House Hunting: Is This Price Right?