France will charge the unvaccinated for Covid tests, in a bid to speed up inoculations.

A Tour of Italy, and a Century of Stunning Cars

Kim Kardashian West Takes Aim at Herself in ‘S.N.L.’ Monologue

With Her Party Fading, Merkel Dips Into the Campaign Fray

‘Dune’ Review: A Hero in the Making, on Shifting Sands

Is Hollywood Doing Fine With Oklahoma?

WHITEHAVEN, England — Britain has been getting out of the coal business for the past 100 years. The fuel that turned an island nation into a …

WHITEHAVEN, England — Britain has been getting out of the coal business for the past 100 years. The fuel that turned an island nation into a black-skied manufacturing giant during the Industrial Revolution has steadily been replaced by oil, natural gas and, increasingly in recent years, offshore winds and the rays of the sun.

That’s why a proposal, the first in decades, to dig a new coal mine in Whitehaven, a faded harbor town in northwest England, has excited so much interest — enthusiasm from some, repulsion from others.

And it has put Prime Minister Boris Johnson in a bind. As he prepares to host the U.N. climate conference COP26 in the fall, the proposal forces him to choose between economic development for a region eager for new investment and burnishing his environmental credentials as climate change dominates political debate.

The proposal by West Cumbria Mining calls for investing 160 million pounds, or $218 million, in a mine that would create more than 500 well-paying jobs, ranging up to £60,000 a year. The coal would be used not in power plants, but instead in the making of steel, an industry still heavily reliant on coal.

The mine would ease the reliance of British steel makers on imported coal to run their mills.

“If it is not mined here, it will be brought in from elsewhere,” said Mike Starkie, the mayor of the Whitehaven area, which was once a hub for coal mining. He became a backer of the project soon after winning election six years ago.

Although using coal to make steel generates greenhouse gases, Mr. Starkie pointed out that steel was necessary for green energy — to make wind turbines, for example.

“I don’t think anyone would argue that it is anything but very positive for the local economy,” he said. That sentiment is shared widely in Whitehaven, where residents remember the coal-mining jobs that once infused family incomes, supporting local businesses. 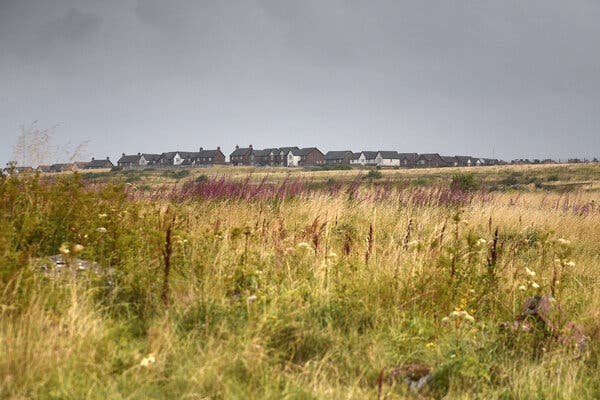 Coal from the proposed mine in Whitehaven would be used for steel production. Credit…Mary Turner for The New York Times

Others see West Cumbria Mining’s proposal as an embarrassment for Britain, and a potential setback in its efforts to become carbon neutral. As Britain’s production of coal has dropped more than 90 percent over the past decade, the country has aggressively championed renewable energy sources, like solar and wind power. Mr. Johnson has said he wants to make Britain the “Saudi Arabia of wind.”

A new mine in Whitehaven could undermine Mr. Johnson’s credibility as he tries to persuade countries like China and India to burn less coal, critics say.

“If you are going to make the global phaseout of coal a priority, you can’t be having a coal mine,” said Doug Parr, chief scientist of Greenpeace UK, the environmental group.

The Climate Change Committee, an influential watchdog created by Parliament, has warned that the mine would increase global emissions and “have an appreciable impact” on Britain’s legally binding carbon targets.

Mike Starkie, the area’s mayor, at the site of the proposed mine. He called the plan “very positive for the local economy.”Credit…Mary Turner for The New York Times

But Mr. Johnson is under pressure to bolster the economies of northern constituencies, like Cumbria County and the Whitehaven area, that have turned Conservative after decades as Labour Party strongholds. Large local employers, including a chemical factory and a steel works, have shut down over the years.

Along with Mr. Starkie, the local member of Parliament, Trudy Harrison, backs the project. Both are Conservatives, the party led by Mr. Johnson.

A planning committee of the Cumbria County Council has approved the mine three times, but the threat of legal challenges held it up. In March, in an unusual move, Mr. Johnson’s government interceded and said it would decide the matter, arguing that the mine’s application raises “issues of more than local importance.”

An agency is expected to begin a review in early September. It will make a recommendation, but Mr. Johnson’s government has the final say.

West Cumbria Mining, which is backed by the Australian private equity firm EMR Capital, said in a statement at the time that it was “very disappointed” by the government’s action. The company has said it would use modern, safe mining machines capable of digging out nearly 30 metric tons of coal per minute. Its statement said that it had already spent £36 million on preparations for the mine and that there was “a very real risk that the project will never be delivered.”

The company declined requests for an interview. In a recent filing, it said there was a “reasonable expectation” the government would approve its plans, but in the meantime it had begun a “cost saving” effort by telling staff members that they would be terminated and by cutting all expenses except those related to the inquiry.

Kate Willshaw, policy officer of Friends of the Lake District, a conservation group, is among those opposing the mine project.Credit…Mary Turner for The New York Times
“From the Cumbrian point of view having a coal mine doesn’t make much sense,” said Ruth Balogh, a local representative of Friends of the Earth.Credit…Mary Turner for The New York Times

The mine’s opponents are gearing up for a fight. The organization Friends of the Earth recently held a meeting in Cockermouth, about a half-hour drive from Whitehaven, with a small group of volunteers to talk about how to discuss the issue with decision makers and prepare a door-to-door campaign.

“From the Cumbrian point of view, having a coal mine doesn’t make much sense,” said Ruth Balogh, a local representative of Friends of the Earth.

In Whitehaven itself, many residents are supportive of the mine and dismayed at the souring of its prospects.

“To me, it’s an opportunity to start creating an industry locally,” said Danny Doran, who works at a nuclear research institution. “Kids come up, and there is nothing available,” he added, speaking outside his home not far from the site of a former chemical plant where the mine’s processing plants would be built.

“To me, it’s an opportunity to start creating an industry locally,” said Danny Doran, a local resident.Credit…Mary Turner for The New York Times

Mr. Doran and others said they were resentful at what they considered outsiders trying to take away a golden opportunity.

“I think there are too many do-gooders putting their nose in that don’t live in Whitehaven,” said Barry Patrickson, a trash hauler. He said that there used to be many places to work in Whitehaven, but that most had shut down. “It is a ghost town now.”

Some so-called outsiders live in nearby communities on the edges of the scenic Lake District National Park, a magnet for tourists and people moving out of Britain’s cities.

At the same time, there is grumbling that the government has done little to make the West Cumbria coast attractive to new investors. The area remains isolated with poor transportation links. A train trip to London eats up a day.

“People feel geographically isolated and also quite culturally isolated,” said Suzanne Wilson, a research fellow at the University of Central Lancashire, who has studied the community around the proposed mine.

Decades of falling behind other parts of Britain have left towns like Whitehaven “vulnerable to exploitation,” said Simon Carr, a professor of geography at the University of Cumbria. Local politicians will, he said, “jump on anything to improve the economic and social well-being in these areas.”

The mining company seems to be appealing to this yearning for the supposedly better times of old, even using a onetime mining museum as its headquarters. “People think this is what a good job is,” said Kate Willshaw, policy officer of Friends of the Lake District, a conservation group.

Some locals, though, recall the dangers of mining.

“It’s affected everybody; I don’t understand why anyone wants it,” said Margaret Telford,whose parents lost siblings in mining accidents.

Gerard Richardson, a local historian who runs a wine shop, had a grandfather who died in the 1947 William Pit mine disaster.Credit…Mary Turner for The New York Times

In 1947, 104 people died in a disaster at a Whitehaven mine called the William Pit when an explosion trapped workers underground. The mine was reputed to be one of the most dangerous in Britain, said Gerard Richardson, a local historian who runs a wine shop. One of Mr. Richardson’s grandfathers was among those who perished.

Yet he supports the mine project. As long as the world needs coal for steel making, he said, “why shouldn’t we have a piece of the pie?”

Mr. Carr and some others doubt that the mine would do much more than make a profit for its backers. They say the new jobs would have a limited future as new, cleaner ways are developed to make steel. Whitehaven should emulate northeast England areas like Hull and Teesside, Mr. Carr said, by going for jobs in green energy like wind power.

But Emma Louise Williamson, a Labour politician on the Cumbria County Council, said that although green jobs might be the future, her constituents needed work now.

“When they take the mine away, which I am really nervous is going to happen, we are back to square one again,” she said.