Whiplash for the Concert Business as the Delta Variant Rages On

Where Do Theater Artists Go to Ask Questions? Poughkeepsie.

‘The Opposite of Airlines’: When Larger Audiences Require Fewer Seats

How Michael K. Williams Made Omar Little His Own on ‘The Wire’

The “Waitress” cast and crew hugged. They embraced. They squeezed. They swayed. And at their first in-person rehearsal on Wednesday, Aug. 4, they …

The “Waitress” cast and crew hugged. They embraced. They squeezed. They swayed.

And at their first in-person rehearsal on Wednesday, Aug. 4, they also paid tribute to Nick Cordero, the actor who died of complications of the coronavirus last summer. He was in the original Broadway production, and the show’s book writer, Jessie Nelson, had an idea: On opening night, they should put a pie in Cordero’s honor on the menu board of the diner in the show. They settled on a slice of “Live Your Life,” named after a song he had written.

When the “Hadestown” cast first met for rehearsals, they formed a ring around their ghost light, which had illuminated the empty Walter Kerr Theater for over a year. “I’m so glad to be here with you all,” said Anaïs Mitchell, who wrote the Tony-winning show’s music, lyrics and book.

Ruben Santiago-Hudson, the writer, star and director of “Lackawanna Blues,” began running through the lines he remembered as he visited a rehearsal studio for the first time. He squinted into the corners of the room, as if his lines might be hidden there. He recalled more than he thought he did.

In spaces in or near Midtown Manhattan, the casts and crews of Broadway shows are reconvening for the first time, preparing to take the stage after the pandemic-forced closure. We were flies on the wall at several of these meetings, all for shows that are among the first to begin performances on Broadway. With each first, one thing held true: The show would go on. 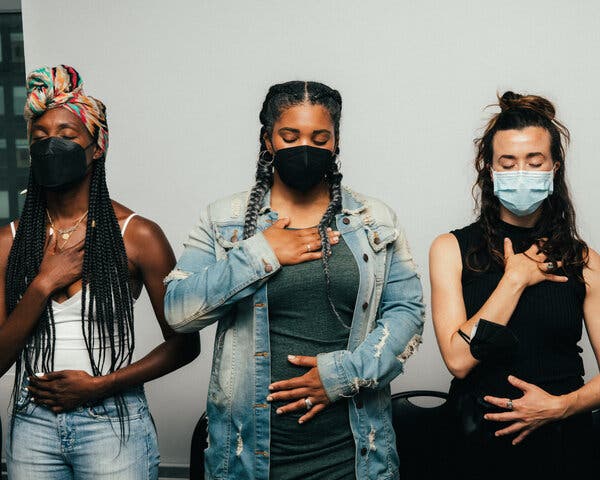 There are three new mothers in the “Hadestown” rehearsal room. One, the director Rachel Chavkin, wore her newborn, Sam Vincent, in a baby carrier strapped to her front. Two tiny, pink feet peeped out the bottom. Another, the actress Afra Hines, spent the whole pandemic with her baby girl in the South Bronx. The third, Anaïs Mitchell, had a 16-month-old named Rosetta at home.

At the first rehearsal, after the rest of the cast and crew shared personal updates, Mitchell pulled out her phone. She’d been in touch with the show’s vocal arranger, Liam Robinson, while he was in South Korea, she said, and he sent her a voice memo of an Irish folk song for a singalong. She’d try to remember how it went.

“Let union be in all our hearts,” she sang the chorus, cleanly, crisply. The cast sang it back, harmonizing effortlessly. “Let all our hearts be joined as one. We’ll end the day as we began: We’ll end it all in pleasure.”

The singer and songwriter Sara Bareilles — who wrote the music and lyrics for the musical “Waitress” — mingled among its cast and crew. “It’s very surreal,” she said. “We keep saying that it feels like a one-year high school reunion.” The last time she starred as Jenna Hunterson in this stage adaptation of the 2007 movie was at the Adelphi Theater in London, and that production closed early because of the pandemic.

As Barry Weissler, a co-producer, put it, “If Stephen King wrote the last year and a half in a novel, nobody would believe it.”

Six years and six months after the show’s first Broadway meet-and-greet (the original production debuted on Broadway in 2016) in the very same building, the cast and crew gathered again, and formed a circle. The choreographer Lorin Latarro asked everyone to hold hands for the first time in over a year. “One, two, three: inhale,” she directed. “And exhale together.”

First rehearsal of “All That Jazz”: Aug. 17 at 5 p.m., Baryshnikov Arts Center

Five, six, seven, eight…: Bianca Marroquín, forefront center, with her “Chicago” ensemble members. She returns to the production to vamp it up as Velma Kelly after playing Roxie Hart off and on over the years.Credit…George Etheredge for The New York Times
From left, Jermaine Rembert, Arian Keddell, Michael Scirrotto and Bianca Marroquín.Credit…George Etheredge for The New York Times

The associate choreographer Gregory Butler, wearing a black muscle tank top and black bell bottom sweats, counted out quick, taut eight counts. A cluster of dancers — also all in black — followed his every note as they rehearsed the choreography for the show’s opening number, “All That Jazz.”

“They are just celebratory, and they’re living through every fiber of their body, to the point where that excitement makes them hit themselves,” Butler instructed, slapping his arms for emphasis. “Then they have to shake it off.” He shimmied as an example.

The dancers murmured, “I love you.”

Suddenly, the energy in the room shifted.

“She’s so proud,” Butler whispered, voice cracking. The dancers huddled in close, hugging him. “In the name of Annie,” he said, honoring the choreographer of this long-running revival, Ann Reinking, who died in December. “Thank you, Annie.”

“Welcome to Nanny’s house,” read a small green sign in the “Lackawanna Blues” rehearsal room. “Where great memories are made.”

The play’s writer, director and actor, Ruben Santiago-Hudson, bought the sign on a recent trip with his wife, when they stopped in Cold Spring, N.Y., for a bite to eat.

It was, Santiago-Hudson said, only the most recent time his late Nanny appeared in his life.

“Nanny always shows up,” he said. “She showed up on that thing: ‘I’m going to be in a little town in upstate New York.’”

“Do you know, when I went in to get it, the lady who has a little boutique, she said to me, ‘You had a nanny?’” Santiago-Hudson said. “I said, ‘No, my mother, they called her Nanny.’ She said, ‘Tell me about her.’”

Their show was about a month away from its first preview performance. As sweat beaded under masks and upper lips perspired in the beating sun, the cast and crew of “Pass Over” introduced themselves for the first time through handshakes and hugs, rather than a Zoom screen. Then they listened intently to the playwright Antoinette Chinonye Nwandu as she preached a sermonette.

With her close-shorn pink and blue hair, Nwandu read aloud from the Bible. We are in Old Testament times, she said, and the world needs healing. Voice strained, she read about Ezekiel in the Valley of Dry Bones. “‘And as I prophesied, there was a noise, and behold a shaking, and the bones came together, bone to his bone,’” she read. “Y’all didn’t know you were in these verses. Hello, bones!”

“Pass Over” is in performances at the August Wilson Theater; SeatGeek.com.

Somewhere deep inside the Gershwin Theater sat a neat array of chairs, six wide by five deep. On those chairs were the cast members of “Wicked,” masked up and murmuring among themselves like students back from summer vacation. From the front of the room, the musical director, Dan Micciche, commanded their attention for the first rehearsal of the score.

“Hiii!” Micciche singsonged. The room burst into cheers and applause. “Oh, God. I just — the amount of gratitude to see you all,” he said. “I’ve dreamed of this for 18 months, as we all have.

“I just couldn’t be happier to be here and be with you all — and to hear you,” Micciche said. “Know that I just,” his voice dropped to a strained whisper, “love you so much.”

Then, back to business: “I’m going to lead you through a little eighth-grade vocal warm-up,” Micciche hammed up the last phrase. “And then we’re just going to run.”

“Wicked” resumes performances on Sept. 14 at the Gershwin Theater.

Building a More Sustainable Car, From Headlamp to Tailpipe

Three (White, Male) Tough Guys Sign Off. Is It a Moment?

Germany adds the U.S. to its ‘high risk’ list, requiring some travelers to quarantine.