Taylor Swift Returns to No. 1 With Autographed ‘Fearless’ CDs

Human Most of All: In Moscow, a Theater Stages ‘Gorbachev’

An Eerie, Thrilling Trip to the Toronto International Film Festival

A New Era Takes Shape at the World’s Opera Capital

President Biden declared the end of an era in which the U.S. uses military power “to remake other countries.” Credit…Doug Mills/The New York … 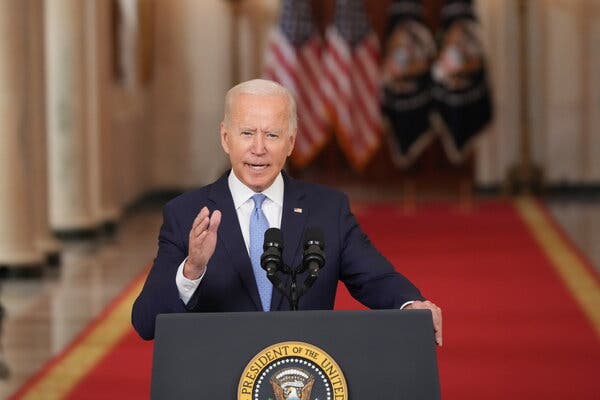 President Biden declared the end of an era in which the U.S. uses military power “to remake other countries.” Credit…Doug Mills/The New York Times

A choice ‘between leaving or escalating’

Speaking from the White House a day after the final U.S. military plane left Kabul, President Biden vehemently defended the decision to end the war in Afghanistan.

The operation to evacuate Americans and Afghan allies was an “extraordinary success,” he said, as he declared the end of an era in which the U.S. uses military power “to remake other countries.”

Biden has blamed Donald Trump for negotiating a bad withdrawal deal with the Taliban. “That was the choice, the real choice between leaving or escalating,” he said. “I was not going to extend this forever war.”

With the exit from Afghanistan, the U.S. faces a new dilemma: how to deal with the new Taliban government. Some of the issues include how deeply to cooperate against a mutual enemy, ISIS-K, and whether to release $9.4 billion in Afghan government currency reserves that are frozen in the U.S.

From the Taliban: Hours earlier, the Taliban’s spokesman declared victory in their two-decade fight against U.S. occupation. Afghans roaming the streets of Kabul began to assess what life would be like under Taliban rule.

An entertainer performed for those who had just received Covid-19 vaccines in Antwerp, Belgium, earlier this year.Credit…Virginia Mayo/Associated Press

The E.U. hits a vaccination milestone

About 70 percent of adults in the E.U. have been fully vaccinated against Covid-19, officials said yesterday, putting the bloc among the world’s leaders in vaccinations, despite a sluggish start.

While countries like France and Italy have implemented strong incentives for people to get inoculated by requiring proof of vaccination to dine indoors or enter cultural venues, vaccine hesitancy and poor communication have led many Eastern European countries to fall behind.

Quotable: “The pandemic is not over,” Ursula von der Leyen, the president of the European Commission, warned. “We need more. I call on everyone who can to get vaccinated.”

Power lines and utility poles blocked a road in Houma, La., on Tuesday.Credit…Johnny Milano for The New York Times

A slow recovery from Hurricane Ida

Widespread power outages in Louisiana and Mississippi are hampering recovery efforts after Hurricane Ida. Officials pleaded with residents not to return to their homes right away. Follow live updates here.

While search-and-rescue efforts wound down in smaller towns, the ugly reality of the storm’s aftermath, even in places like New Orleans that were spared the worst, was becoming miserably clear.

Officials emphasized that they had not fully eliminated the possibility of large-scale evacuations for the 200,000 people they estimate remain in New Orleans.

Difficult decisions: Some are chafing at warnings from officials to stay away. A hotel stay is a costly alternative, while some people for whom homeowners’ insurance is prohibitively expensive feel they can’t afford not to return home and salvage what they can.

A century after collectors from the American Museum of Natural History traveled to Colombia to study its avian fauna, collecting more than 800 birds in the process, a team of researchers has made a similar expedition to see what remains and what has changed. Above, a pair of Lafresnaye’s piculets, tiny tropical woodpeckers.

“We’re not trying to create high-quality bird collections for the sake of accumulation or out of nationalism,” one scientist working on the project said. “We’re doing this because we need this.”

Throughout her career, Aretha Franklin remained fairly unknowable to the public. “I didn’t make a dent in her armor,” David Ritz, a biographer, once lamented.

Because of this privacy, it’s tough for onscreen portrayals of Franklin to fully capture the artist. The most recent attempt — the film “Respect,” starring Jennifer Hudson, above — sticks “too closely to Franklin’s own self-image, a narrative that she tightly controlled,” Salamishah Tillet writes in The Times.

The Sydney Pollack documentary “Amazing Grace,” on the other hand, would not have made it to screens if it were up to Franklin, who repeatedly sued to block its release. Filmed in 1972 over two nights in a Los Angeles Baptist church, the movie was released after Franklin’s death.

The film, Tillet writes, is “all gospel, a cinematic capturing of spiritual ecstasy and religious exaltation, and a Franklin who surrenders her voice to God, and is at her most sublime.”

An herby yogurt marinade makes these chicken thighs supremely tender and helps them brown beautifully on the grill.

In his latest novel, “The Magician,” Colm Toibin imagines the life of Thomas Mann, the Nobel Prize-winning author of “The Magic Mountain” and “Death in Venice.”

That’s it for today’s briefing. Have a good Wednesday. — Natasha

P.S. All Access digital subscribers to The Times now have unlimited access to Wirecutter, its product recommendation service.

The latest episode of “The Daily” is about America’s final hours in Afghanistan.

Sanam Yar wrote today’s Arts and Ideas. You can reach Natasha and the team at [email protected].

Britain Prepared for a Jobs Crisis, Just Not the One It Got

Trudeau Wins, but Is Diminished by a Futile Election
ZİYARETÇİ YORUMLARI