Flash Floods in Turkey Kill 59, and Dozens Are Still Missing

The Missing Piece in the Push for Boardroom Diversity

In London, Musicals That Stay True to a Brand

The Amazon of Quinoa Bowls

Sudan Rocked by Protests Amid Warnings of a Coup
Anasayfa » Güncel » Your $4.39 Latte From the Local Roaster Could Soon Cost More

Your $4.39 Latte From the Local Roaster Could Soon Cost More

Coffee roasters have a problem. The cost of the beans that they import has soared this year, leaving roasters anguishing over whether their …

Coffee roasters have a problem. The cost of the beans that they import has soared this year, leaving roasters anguishing over whether their customers, from grocery stores to cafes to people looking for their daily latte, will tolerate higher prices.

Extreme weather has damaged crops in Brazil, the world’s largest coffee exporter. On top of pandemic-related shipping bottlenecks and political protests that stalled exports from Colombia, that has pushed the cost of beans up nearly 44 percent in 2021.

It’s not yet a problem for Starbucks or Nestlé, coffee giants that buy their supplies far in advance and won’t have to deal with the price gains for a year or more. But some smaller roasters have already had to raise prices, and others expect to — all the while worried about alienating consumers.

“These increases are making me nervous because one of the main tenets that we operate on is being able to make specialty coffee and make the pricing affordable,” said Quincy Henry, a co-owner of Campfire Coffee in Tacoma, Wash., which opened in March 2020 as the pandemic began. “It’s got me thinking about how we’re going to survive.”

Mr. Henry might have to raise prices or cut costs somewhere else, such as using cheaper supplies to roast coffee. If he does decide to charge more than the current $4.39 for his 12-ounce lattes, he said, he needs a price that “won’t scare people off” as the economy recovers.

“We’re still in a stage in the pandemic where people are price sensitive,” he said. 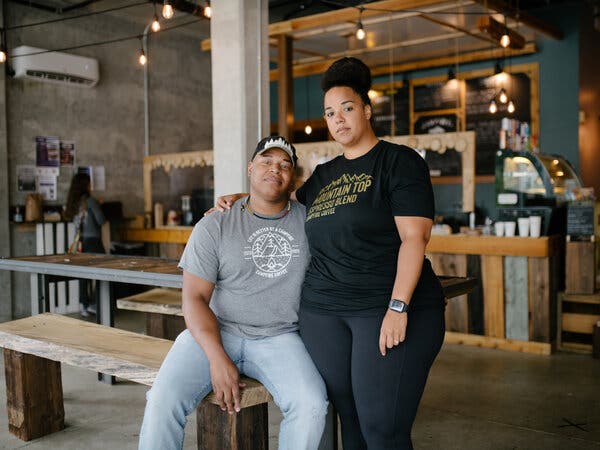 Campfire Coffee in Tacoma, Wash., may have to raise prices because arabica beans have gotten more expensive, said Quincy Henry, who owns the shop with his wife, Whitni. Credit…Grant Hindsley for The New York Times

Mr. Henry remembers when Brazilian arabica beans were some of the least expensive he could buy, locking them in for $1.90 per pound. His latest order, in late July from the same importer, cost him $2.49 per pound.

Behind that increase is a run-up in the price of beans that will be delivered to roasters months from now. Traders call these “coffee futures,” and they serve as a baseline for buyers around the world. A pound of arabica beans in the futures market, usually $1.20 to $1.40, rose above $2 at the end of July, the highest since 2014. On Wednesday, the price of coffee futures was $1.84 a pound.

Prices climbed above $1.40 in late April, as weeks of political protests rocked Colombia, the world’s third-largest coffee exporter. The country exported 345,000 60-kilogram bags of coffee in May, only one-third its usual monthly shipment, according to data from the nonprofit National Federation of Coffee Growers of Colombia.

Colombia’s exports have since rebounded, but those from other large producers, like Vietnam, have been slowed by shipping bottlenecks as the global economy struggles to reopen after a year of lockdowns. A shortage of shipping containers has restricted exports, analysts say, and led to a sharp rise in the cost of shipping, too.

Jeff Taylor, a co-owner of Bird Rock Coffee Roasters in San Diego, said shipping bottlenecks had delayed his usual purchase of specialty arabica beans from El Salvador by nearly a month and a half. So he has had to buy smaller amounts of coffee in the United States as a temporary solution. Mr. Taylor hasn’t raised prices yet, but he expects he may by the end of the year.

The big question is what will happen to the supply from Brazil. The country, which annually exports 34 million bags of coffee beans on average, has been hit with a series of climate shocks — a drought and plunging temperatures.

Temperatures last month fell below 27 degrees Fahrenheit, about half what’s normal and the kind of cold that can damage or even kill coffee trees.

“A severe cold frost normally burns leaves and branches of the coffee tree, which reduces the quality and quantity of coffee bean production,” said Kevon Rhiney, assistant professor in Rutgers University’s department of geography, where he specializes on the coffee industry.

July is also the start of wildfire season in Brazil. After this year’s drought — the worst in nearly a century in some parts of the country — it could be devastating.

If the damage is bad enough, growers may have to “stump” their trees, or cut them down to the base, which means it will be three years before the next harvest, Mr. Rhiney said. If they only need to prune branches, the harvest could be delayed a year.

Often the decision comes down to whether the grower can afford to pay someone to prune or stump the trees. Doing nothing means risking continually poor harvests that could ripple through the global market.

Salomón Shamosh, the chief executive of Boicot Café in Mexico City, buys his coffee exclusively from Mexico, but said prices there were rising because of the problems in Brazil.

Campfire Coffee, which roasts its beans over an open fire, paid $2.49 per pound for its green coffee in late July, nearly a third more than earlier in the year.Credit…Grant Hindsley for The New York Times

“There’s so much demand for coffee in the United States and Europe, Mexican distributors are raising their prices,” Mr. Shamosh said. “We have to pay for it,” he added, because if they don’t, “then the product doesn’t stay in Mexico.”

The cost of coffee beans from the Mexican states of Veracruz, Oaxaca and Chiapas has risen between 10 percent and 15 percent in the last three months. Mr. Shamosh said Boicot Café might have to raise the price of its cold brews, which start at 49 pesos, or about $2.50, by January.

Not until the end of this year’s harvesting season, next month, will producers in Brazil decide what to do, and what happens next could determine whether even the largest producers are able to hold off price increases.

“By September we’ll know how the damage could impact next year’s crop,” said Kona Haque, head of research at ED&F Man, an agricultural commodities merchant.

Should prices remain high long enough, even Starbucks and Nestlé will have to consider raising prices, though they’re likely to resist doing so.

“Roasters will think twice if they pass that cost on to consumers and not affect consumption,” Ms. Haque said. “If they think people are worried about inflation, mortgages or what will happen to future jobs, then they won’t.”

“It’s got me thinking about how we’re going to survive,” Mr. Henry said.Credit…Grant Hindsley for The New York Times

Starbucks buys coffee 12 to 18 months in advance and bought continually during the pandemic, its president, Kevin Johnson, said on an earnings call last month. Thanks to those advance purchases, and the company’s ability to store large amounts of coffee to hedge against rising prices, “we have price-locked our coverage for the next 14 months,” he said.

Donald Schoenholt, president of Gillies Coffee, a Brooklyn merchant that has been around since before the Civil War, has already raised the prices he charges clients, mostly small distributors who resell the beans to cafes, hotels and grocers. Several products, which sell for $5 to $9 per pound, are already 55 to 65 cents more expensive per pound.

Mr. Schoenholt, 76, said he was taking it in stride. Having worked in the industry since 1963, he has seen price gains like this before, but he notes that the fast increase this year is distressing some of his customers and competitors.

“Right now, there is a lot of anxiety,” he said. “The change of costs becomes unnerving, and you start making business decisions that you wish you didn’t make.”

From ‘Call My Agent!’ to Hollywood Career

Review: After Merce, the Dances Go On, and Go On to Inspire