The 2022 Oscar Race Has Begun. Here’s Who Is Already Ahead.

France to Offer Free Contraception for Women Up to 25

Taliban Fighters Crush a Women’s Protest Amid Flickers of Resistance

Merkel Leaves the German Economy With Trouble Under the Hood

‘The Nutcracker’ Returns, With New Rules for Children

Trudeau Seeks a Fresh Start, but Many Voters See a Power Grab

Casey Seiler, editor in chief of The Albany Times Union, was in a meeting on Tuesday afternoon with the newspaper’s executive committee in their …

Casey Seiler, editor in chief of The Albany Times Union, was in a meeting on Tuesday afternoon with the newspaper’s executive committee in their office near the airport when he saw a comment he made privately months earlier was now circulating on Twitter.

“Ugh, no, no! Not off the record,” Mr. Seiler was quoted as saying. “No, don’t send us anything unless it’s on the record, Melissa, ok?” referring to Melissa DeRosa, a top aide to Gov. Andrew M. Cuomo.

Mr. Seiler, mostly bald and boyish-looking, like a nerdy Patrick Stewart, declined to specify how often he says “ugh” in professional settings. But the spirit of the exchange — made public as part of a bombshell report released on Tuesday by the state attorney general — was representative of what life has been like at Mr. Cuomo’s hometown paper while the governor fights for his political life.

Mr. Seiler had been protesting Ms. DeRosa’s offer in March to send the newspaper a document about a woman who accused Mr. Cuomo of harassment. Putting information off the record — details that can’t be directly shared with readers, but could be intended to influence coverage — was something the Times Union discouraged. Ultimately, no document was sent. (“It wasn’t a personnel file. It wasn’t anything derogatory,” Richard Azzopardi, director of communications and senior adviser to Mr. Cuomo, later said. The document would have “added a little bit of context” to the conversation, he said.) 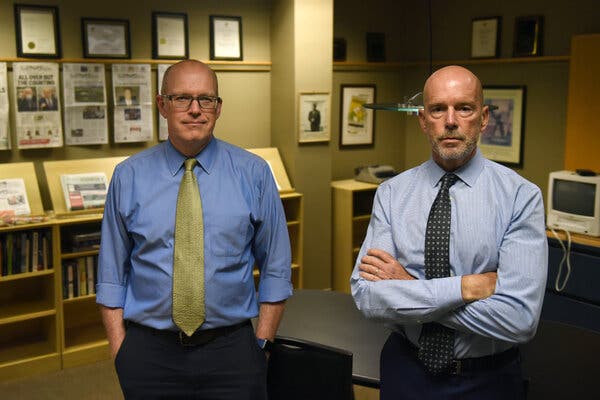 That report from the state attorney general concluded that Mr. Cuomo harassed 11 women and oversaw a toxic work environment.

Many details are on the record now, including the lengths to which Mr. Cuomo’s team went to manage his image during this crisis. For The Times Union specifically, that has included the team supplying potentially damaging information about an accuser; frequently insisting on going off the record when contacted by a reporter; providing inaccurate information; and screaming at reporters and editors in telephone calls.

The pandemic roller coaster that Mr. Cuomo has been on also took the paper for a ride. Mr. Cuomo’s popularity soared during his regularly televised coronavirus briefings (sobering data, inspirational quotes, zingers from his brother, the CNN host Chris Cuomo), which stood in contrast to President Trump’s (dangerous information, false reassurances and attacks on reporters). Yet while other journalists at the paper were occasionally called on to ask Mr. Cuomo questions, the head of the paper’s Capitol coverage never was.

Now, in the aftermath of the attorney general’s report, Mr. Cuomo’s tactics and his targets are in full view. On Tuesday, seeing the words he uttered privately circulating online, Mr. Seiler picked up his laptop and walked out of the meeting. Then, he called Brendan J. Lyons, who oversees the Times Union’s coverage of the Capitol and who was on that phone call with Ms. DeRosa in March.

Mr. Lyons already knew something was going on. He was working from home when he saw someone on Twitter call him and Mr. Seiler heroic. His first reaction: “Uh oh.”

Neither man had known that the 38-minute phone call in March had been recorded, presumably by Mr. Cuomo’s aides, let alone that the recording was obtained by investigators, transcribed and featured in the attorney general’s report.

In early March, days before the phone call, Mr. Lyons had published an interview with an unnamed aide to the governor who said he had groped her. Now, months later, Mr. Lyons raced to recall whether that secretly recorded phone call laid bare by the attorney general’s report might include information about the aide that was never intended to be public.

“This is a story about sexual harassment,” Mr. Lyons said in an interview. “Is there something in there that’s damaging to a victim, or exposes a victim?”

The Times Union’s Capitol newsroom in Albany.Credit…Patrick Dodson for The New York Times

For the 165-year-old newspaper rooted in a county with fewer residents than Staten Island, the Cuomo scandal is a rare moment of wider attention. For years, as online platforms and social media gobbled up advertising dollars and audiences, news organizations covering state capitols, including Albany, have shrunk. The Times Union has devoted more resources than most other outlets to covering Mr. Cuomo and his administration: In addition to Mr. Lyons, two other reporters and a younger, reporting fellow, are assigned to the Capitol, not including beat reporters who veer into coverage, too.

The Times Union, which is owned by Hearst, has stuck to its old-fashioned principles. No going off the record unless absolutely necessary. Minimal schmoozing with sources. Don’t let your inbox dictate how you’re going to spend your day.

That approach is particularly ill-suited for a Cuomo administration. Mr. Cuomo, a three-term Democratic governor, is the son of a three-term Democratic governor. Both developed reputations for obsessing over their media coverage, calling reporters and editors seemingly without reservation, and shunning those whose coverage they didn’t like, according to journalists and former aides.

Andrew Cuomo, left, with his parents, Mario and Matilda Cuomo, at the 2006 election night celebration for the New York State Democratic Party in New York.Credit…Jemal Countess/WireImage

Mr. Seiler described Mr. Cuomo as the Shakespearean figure whose “greatest skills or attributes are so inexplicably bound up with their flaws and their sins.” He added: “What makes him such a formidable worker of the machinery of politics also makes him a control freak who has a horror of investigations that he does not control.”

When Mr. Cuomo was attorney general, Mr. Lyons wrote an unflattering article about him. After it appeared, Mr. Cuomo called Mr. Lyons. “I made the mistake,” he said, of allowing Mr. Cuomo to go off the record in the call. “Then he proceeded to scream at me and really say some things that were out of line.”

After a while, Mr. Lyons recalled, he said, “I’ve had enough — I’m not listening to you anymore” and suggested Mr. Cuomo call his supervisor, which Mr. Cuomo promptly did before Mr. Lyons could give the supervisor a heads up. “And he started screaming and threatening him as well,” Mr. Lyons said. The lesson, he said: “I’ll never let this guy go off the record with me again.”

Mr. Azzopardi, who has been with the administration for nine years, said, “I can’t tell you what the governor did or didn’t do” when he was attorney general.

On going off the record, Mr. Azzopardi said, “Sometimes you like to be able to explain context without watching every word you say carefully.” He added: “It’s not any different here than in any other political organization.”

The report by the New York State attorney general Letitia James has fueled calls for Mr. Cuomo to resign immediately. And the flames engulfing Mr. Cuomo’s political house are also casting a new light on the newspaper in his backyard.

Letitia James, the New York attorney general, at a news conference on Tuesday announcing the conclusions of the investigation into Governor Cuomo.Credit…Dave Sanders for The New York Times

“I’m no fan of the paper,” Fredric U. Dicker, the former state editor of The New York Post and once considered a friendly media ally of the governor, said in an interview. “But to the Times Union’s credit, they’ve had some very strong stories trying to look into the administration.”

In 2019, Mr. Cuomo and his longtime girlfriend broke up. He moved out of the Westchester home they shared and into the governor’s mansion, becoming a full-time Albany resident for the first time since his father was governor.

It was a home the Queens-born governor never wanted, according to Mr. Dicker, who had been working on a book about Mr. Cuomo before they had a falling out in 2013.

“He thought of Albany — I know, he told me — small town, small time,” Mr. Dicker said. “And I think he found Albany even worse than he had remembered it.”

Mr. Cuomo was unhappily replanted in Albany, and the scrutiny of the Times Union, a robust daily newspaper dedicated to his city and industry, was unlikely to improve his mood. “We had to kind of jump through hoops to get any access to him, even though we were in his backyard.” Jessica Marshall, a multimedia producer for the Times Union, said. “He was always inaccessible. Prior to the pandemic, during the pandemic, the scandal, everything.”

A stack of Times Union newspapers in Stewart’s Shop, in Albany.Credit…Patrick Dodson for The New York Times

The paper, technically located in the neighboring town of Colonie, is the paper for Albany, a city of 96,000 people, many with work tied to the government.In that fishbowl, the plastic castle of the governor’s mansion could be confining.

And now, as Mr. Cuomo appears to be running out of room to swim, The Times Union is being celebrated.

Mr. Seiler’s rebuke of Ms. DeRosa’s offer should be taught in journalism schools, one reporter at The New Republic said the day the report was released. The editor in chief of WNYC public radio said, “Every reporter and editor should commit to memory these famous words” uttered by Mr. Seiler.

The New Yorker interviewed Mr. Seiler for a story with the headline, “How Andrew Cuomo Holds on to Power.” And Mr. Lyons appeared on MSNBC (The Room Rater account on Twitter: “Love the colors. Art. Light. Window on right. Crop left. 9/10.”)

Mr. Lyons took over Capitol coverage for the paper in 2017, after overseeing investigative projects. His probing questions led to major scoops, as well as a chilly reception from the governor.

Governor Cuomo talking with reporters about the coronavirus at The New York State Capitol in Albany, in March.Credit…Gabby Jones for The New York Times

“I gave up raising my hand in the Zoom calls, asking to be called on,” Mr. Lyons said, discussing Mr. Cuomo’s pandemic news conferences and the smattering of availabilities the governor held since the initial allegations against him were made public starting in February. “I’ve never been called on a single time.”

Mr. Azzopardi said The Times Union pushed to have in-person news conferences and then “they didn’t bother to show up.” So, he said, “on that point, I’m not that sympathetic.” Mr. Seiler said a mixture of safety concerns and news value led the paper to cover those events remotely.

At the time he was being ignored, Mr. Lyons naturally wanted an explanation. “I said to one of my reporters, if you get called on, to ask him who is the person picking who gets to ask the questions?” Mr. Lyons recalled.

A Language Bill Deepens a Culture Clash in Quebec