E.U. Court Rules Russia was Behind 2006 Assassination in the U.K.

The Wisdom of the Crowd 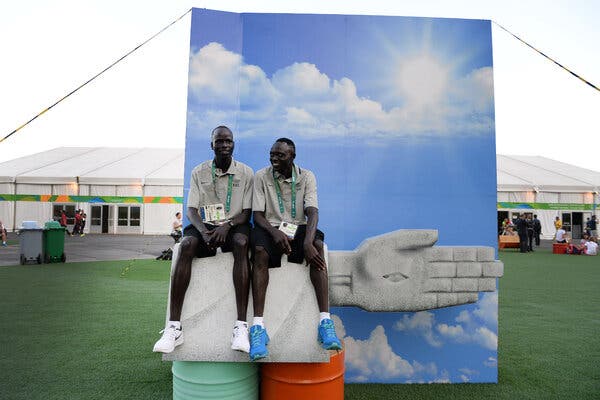 At this year’s Olympics, Team Canada is 371 athletes-strong, the country’s largest team to compete since the 1984 Games in Los Angeles.

And on their trips back home, the 2020 Tokyo cohort will increase by three.

That’s because three middle-distance runners from the International Olympic Committee Refugee Team are coming to Canada.

Paulo Amotun Lokoro, Rose Lokonyen Nathike and James Nyak Chiengjiek, track and field athletes originally from South Sudan, will be headed to Ontario after the Games thanks to a new athletic scholarship. It’s offered through the World University Service of Canada (WUSC), a nonprofit organization that has connected 2,100 refugees to educational opportunities here over the past four decades.

The athletes will join another 150 refugee students selected from roughly 5,000 applicants to land at one of 80 participating institutions this fall. The three athletes will study at Sheridan College in Oakville, west of Toronto, which is partnering with WUSC and refugee agencies at the United Nations to offer the program.

“It’s powerful, it’s transformative,” Katharine Im-Jenkins, chief programs officer at WUSC, told me, with a caveat. “It’s a drop in the bucket, and the scale of the challenge of forcibly displaced people is 82 million this year, and so we’re really focused on not only those three, but really making that a model and making that bigger.”

Although the pandemic has made usual travel and paperwork for the refugee students more complicated, Ms. Im-Jenkins said she was encouraged that the program that emerged from this year’s Olympics would attract different profiles of refugees. She also hopes it will entice Canadians to “get excited and learn more about refugee issues, and to step up and do what they can in their communities to help.”

Mr. Chiengjiek, who is competing in the 800-meter race in Tokyo, his second Olympics, evaded being forcibly recruited among child soldiers in South Sudan by fleeing to Kenya in 2002, according to the United Nations Refugee Agency. There, at Kakuma Refugee Camp, he trained in long-distance running and was later scouted onto the Olympic Committee’s new refugee team, first appearing at the 2016 Games.

His story reminds me of James Madhier, who I spoke to in 2017 when he was pursuing an undergraduate degree in peace, conflict and justice studies at the University of Toronto. He also ended up at Kakuma camp after returning from a child soldier demobilization and rehabilitation program in Sudan, about three hours away from his hometown.

Though Mr. Madhier did not count himself among the boys needing rehabilitation, he went there because he thought the place could offer him an education. Instead, many of the children ended up contracting illnesses, being killed or traumatized, with some officially joining militia groups, he said.

Mr. Madhier’s desire for an education eventually led him to Kenya, where the list of students accepted to WUSC is posted for all to see at the camp.

Something he told me about waiting for the list — and his general view on overcoming hardship — has resonated: “I was nervous, but life has taught me over the years to avoid any heartbreaks, to avoid any hopelessness, you’ve got to create options, even where there are none,” he said. “Even if the option that you will create for yourself is how you will accept the loss.”

This year, we’re seeing athletes boldly create those options for themselves that go beyond a podium moment — from Simone Biles withdrawing from the competition over mental health concerns, to German gymnasts and the Norwegian women’s beach handball team making a statement against “sexualization” in athletics, to the very existence of the refugee team at Tokyo.

And soon, three of them will call Canada home.

The archaeologist Kisha Supernant, who has been instrumental in the ground searches leading to the discovery of unmarked graves across Canada.Credit…Amber Bracken for The New York Times

Play the Crossword and other games here.

Vjosa Isai joined The New York Times as a Canada news assistant in June. Follow her on Twitter at @lavjosa.

They Finally Get to Dance on Broadway