Don’t Get Excited: N.F.L. Is Cracking Down on Taunting

What’s the Endgame in the M.L.S.-Liga MX Alliance?

A Fan Wanted a Better Team to Cheer. So He Found It Better Players.
Anasayfa » Spor » The Moving Moments as the Paralympics Ended

The Moving Moments as the Paralympics Ended

TOKYO — The second and final week of the Paralympics produced some particularly moving moments. The closing ceremony on Sunday night included two …

TOKYO — The second and final week of the Paralympics produced some particularly moving moments.

The closing ceremony on Sunday night included two Afghan athletes, Hossain Rasouli and Zakia Khudadadi, who had arrived late to the Games after they were evacuated from their tumultuous home country.

The pair had been replaced by a volunteer flag bearer in the opening ceremony. In competition, Rasouli participated in the long jump after missing his preferred event, the 100 meters, and finished 13th and last, well behind the 12th-place finisher.

Khudadadi, 22, appeared in the first bout on Thursday as taekwondo also made its Paralympic debut. She lost to Ziyodakhon Isakova, 23, of Uzbekistan, in the women’s under-49 kilogram category and then returned for a repechage round in the quarterfinals against Viktoriia Marchuk of Ukraine, who won the match 48-34. 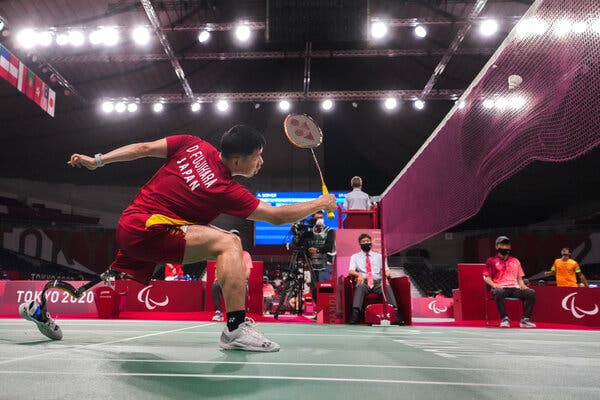 Daisuke Fujihara of Japan competed in badminton men’s singles against Manoj Sarkar of India. Fujihara lost but ended up getting a bronze with his partner in mixed doubles.

David Brown, known for years as the fastest blind man in the world, lost his world record in his division’s 100-meter race and did not make it to the finals for a chance to repeat as the Paralympic champion. And he seemed fine about all of it, saying after he finished that he had known for a while that he was simply training for the Paris Games in 2024.

Brown’s longtime running guide, Jerome Avery, got hurt early in the year, and Brown was unable to adjust to his absence or to get fully in sync with the replacement guide, Moray Steward.

The world record and the gold went to Athanasios Ghavelasi of Greece, who finished a qualifying heat in 10.88 seconds, breaking Brown’s mark of 10.92 seconds set in 2014.

Brown, 28, headed back to the United States with Paris in his long-term future and a wedding in the near term. He and Rebekah Hill, an archer who met Brown at the Chula Vista Elite Athlete Training Center near San Diego, were planning to marry within two weeks of the Paralympics.

Another runner found her life partner on the track. Soon after Keula Nidreia Pereira Semedo of Cape Verde, a visually impaired sprinter, had just finished a 200-meter qualifying heat, her sighted guide, Manuel Antonio Vaz da Veiga, approached her and got down on one knee and proposed. He was accompanied by the other runners and guides in the heat, who applauded as he proposed.

The flag of Afghanistan hangs from the rafters to the left of the flag of the United States during a taekwondo competition.
ETİKETLER:
100BrownMetWhoWon
BU KONUYU SOSYAL MEDYA HESAPLARINDA PAYLAŞ
Tweetle

The Teenagers Are Taking Over Tennis. That Might Not End Well.

Putting the ‘Open’ Back Into the U.S. Open

Naomi Osaka on Tennis and Childhood: ‘Home Is Queens and These Courts’
ZİYARETÇİ YORUMLARI