Why Apple Won Its Legal Settlement With Developers

Why Co-Working Spaces Are Betting on the Suburbs

Leader of Apple activism movement says she was fired.

China Targets Costly Tutoring Classes. Parents Want to Save Them.

The Biden administration issues a new eviction moratorium as the virus surges.

WASHINGTON — The Biden administration on Tuesday imposed a new, 60-day federal moratorium on evictions in areas of the country ravaged by the …

WASHINGTON — The Biden administration on Tuesday imposed a new, 60-day federal moratorium on evictions in areas of the country ravaged by the Delta variant, a move aimed at protecting hundreds of thousands of renters at risk of being kicked out of their homes during a pandemic.

The action was also intended to quell a rebellion among angry Democrats who blamed the White House for allowing a previous eviction ban to expire on Saturday — after the Democratic-controlled House was unable to muster enough votes to extend that moratorium.

President Biden told reporters that the Centers for Disease Control and Prevention would seek to implement a new federal moratorium on evictions in communities across the country hardest hit by the virus.

Any call for a moratorium based on the Supreme Court recent decision is likely to face obstacles. I’ve indicated to the C.D.C. I’d like them to look at other alternatives than the one that is in power, in existence, which the court has declared they’re not going to allow to continue. And the C.D.C. will have something to announce to you in the next hour to two hours. The court’s made it clear that the existing moratorium was not constitutional. It wouldn’t stand. And they made that clear back in, I guess, July 15th or July 18th. In the meantime, what I’ve been pushing for and calling for is we have billions of dollars given to states to provide for rent and utilities for those people who can’t afford to stay in their homes because they can’t, in an apartment, they can’t pay their rent. And so we’re urging them to distribute those funds to the landlords. I believe that would take care of the vast majority. of what needs to be done to keep people in their apartments now. And so that’s what we’re working on. Some states have done it, and some communities have, but they have not. The money is there, it’s not, we don’t have to send it out. It’s been sent out to the states and counties, billions of dollars for the express purpose of providing for back rent and rent the people who are in the middle of this crisis. And that’s there, that’s what we’re pushing now. And we’ve been pushing that. 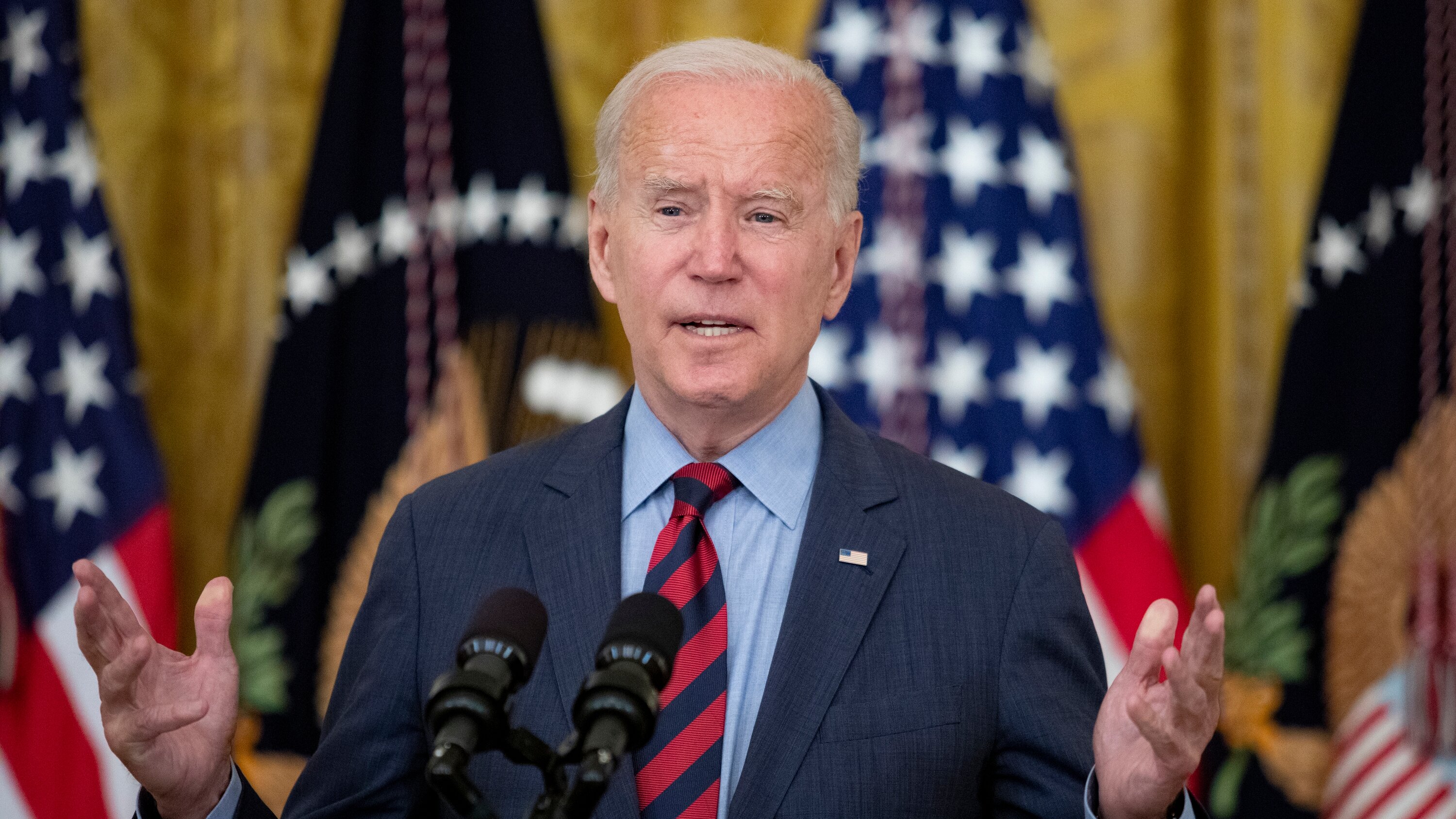 President Biden told reporters that the Centers for Disease Control and Prevention would seek to implement a new federal moratorium on evictions in communities across the country hardest hit by the virus.CreditCredit…Tom Brenner for The New York Times

President Biden has been under intense pressure from activists and allies for the last week to protect people at risk of being driven from their homes for failing to pay their rent during the economic crisis brought on by the pandemic. The previous nationwide moratorium on evictions, which went into effect in September, expired on Saturday after the Supreme Court warned that an extension would require congressional action.

The end of the rental protections has prompted a flurry of recriminations in Washington and a furious effort by the White House to find a solution that prevents working-class and impoverished Americans from being evicted from their homes on Mr. Biden’s watch as billions in aid allocated by Congress goes untapped.

The Centers for Disease Control and Prevention late Tuesday announced the new order barring people from being driven out of their homes in many parts of the country, saying that “the evictions of tenants for failure to make rent or housing payments could be detrimental to public health control measures” aimed at slowing Covid-19.

The order will expire on Oct. 3, the C.D.C. said, and applies to areas of the country “experiencing substantial and high levels of community transmission” of the virus. Mr. Biden, in remarks ahead of the official order, said the moratorium was expected to reach 90 percent of Americans who are renters.

“This moratorium is the right thing to do to keep people in their homes and out of congregate settings where Covid-19 spreads,” Dr. Rochelle P. Walensky, the director of the C.D.C., said in a statement. “Such mass evictions and the attendant public health consequences would be very difficult to reverse.”

The decision to impose a new and targeted moratorium, rather than extending the previous national ban, is aimed at sidestepping a Supreme Court ruling from late June that seemed to limit the administration’s ability to enact such policies. While the court upheld the C.D.C.’s moratorium, Justice Brett M. Kavanaugh issued a brief concurring opinion explaining that he had cast his vote reluctantly and believed the C.D.C. had “exceeded its existing statutory authority by issuing a nationwide eviction moratorium.”

Mr. Biden conceded on Tuesday that the new approach might be struck down by the courts as executive overreach. But he suggested the move could help buy the administration time as it tried to get states to disburse billions of dollars of aid to help renters meet their obligations to landlords.

Congress previously allocated $46.5 billion in rental assistance in two coronavirus relief packages, but only about $3 billion had been delivered to eligible households through June, according to Treasury Department data.

“Whether that option will pass constitutional measure with this administration, I can’t tell you. I don’t know,” Mr. Biden said of a new moratorium. “There are a few scholars who say it will and others who say it’s not likely to. But at a minimum, by the time it gets litigated, we’ll probably give some additional time while we’re getting that $45 billion out to people who are in fact behind in rent and don’t have the money.”

For days, some of Mr. Biden’s closest allies on Capitol Hill, including some of the most progressive Democrats in Congress, have been publicly and privately assailing his lack of action to help renters, accusing the president and his aides of failing to find a replacement for the eviction moratorium until it was too late.

Just days before Saturday’s expiration of the ban, Mr. Biden called on Congress to pass legislation to extend it. But with the House about to leave town for a seven-week vacation and Republicans solidly opposed to an extension, progressive Democrats described the White House call as a cynical attempt to shift blame to lawmakers. The administration, for its part, feared that any unilateral move would open the White House to legal challenges that could ultimately erode Mr. Biden’s presidential powers.

The expiration presented the president with a thorny choice: Side with the C.D.C. and his own lawyers, who saw an extension as a dangerous step that could limit executive authority during health crises, or heed the demands of his party’s progressive wing to take immediate action to halt what they saw as a preventable housing crisis.

Under intense pressure from Speaker Nancy Pelosi and other Democrats, Mr. Biden’s team opted for an approach that would give them a chance to satisfy both camps, creating a new moratorium, based on a recent rise in infections from the Delta variant, that cited the risks associated with the movement of displaced tenants in areas where the virus is raging.

But ultimately it came down to a simpler calculation: Mr. Biden could not ignore the call, led by Black Democrats, to reverse course.

“Every single day that we wait, thousands of people are receiving eviction notices, and some of them are being put out on the street,” said Representative Cori Bush, Democrat of Missouri, who has been sleeping on the steps of the Capitol since the moratorium expired in a bid to pressure her party’s leadership. “People started sending me pictures of dockets, court dockets, that were all evictions. We cannot continue to sit back. We need this done today.”

Ms. Pelosi and Senator Chuck Schumer, Democrat of New York and the majority leader, were briefed on Tuesday on the C.D.C.’s plan by Dr. Walensky, the agency’s director, and Xavier Becerra, the secretary of health and human services, according to a person familiar with the call. Ms. Pelosi hailed the idea of a new eviction moratorium as a victory for many Americans who were struggling because of the pandemic.

“Today is a day of extraordinary relief,” she said in a statement. “Thanks to the leadership of President Biden, the imminent fear of eviction and being put out on the street has been lifted for countless families across America. Help is here!”

Yet for two days it was unclear how — or whether — any help would arrive as landlords prepared to turn to housing courts to evict tenants who were behind on their rent.

At a White House meeting with Mr. Biden on Friday, Ms. Pelosi and Mr. Schumer bluntly informed Mr. Biden they did not have the votes to pass an extension — and pressed him to take whatever action he could using his executive power, according to two Democratic congressional aides briefed on the meeting.

On Tuesday, House Democrats summoned Treasury Secretary Janet L. Yellen to explain what the agency was doing to help struggling renters. In a private call between Democrats and Ms. Yellen, the Treasury secretary insisted that her team was using all available tools to get rental assistance money to states and to help governments distribute those funds to landlords and renters.

“I thoroughly agree we need to bring every resource to bear,” Ms. Yellen said, according to a person who was on the call.

A day later, however, the administration appeared ready to barrel through legal challenges and embrace a solution that did just that.

The extension is likely to intensify a legal fight with landlord groups that have argued that the eviction ban has saddled them with debt.

The National Apartment Association, which filed a lawsuit last week seeking to recoup lost rent, said the moratorium was jeopardizing the viability of the housing market. The group estimates that the apartment industry is shouldering $26.6 billion in debt as a result of the eviction ban.

“The government has intruded into private property and constitutional freedoms, and we are proudly fighting to make owners whole and ensure residents’ debt is wiped from their record,” said Robert Pinnegar, the chief executive of the association.

Legal experts said it was likely that the administration would face a new wave of lawsuits if the justification and structure of a new moratorium was similar to the one that had been in place.

“The only logic by which this could be justified is a logic that would enable them to be able to suppress virtually any activity of any kind that they can claim might spread contagious disease,” said Ilya Somin, a law professor at George Mason University.

Smartphones Won. We Can Ignore Them.