Atlanta Beats the Brewers at Their Own Game

An Arena Where the Goal Is ‘Net Zero’ Carbon Emissions, Even From Fans

N.F.L. Week 8 Predictions: Our Picks Against the Spread

Priceless? Even Olympic Medals Can Be Had for the Right Price

The N.F.L.’s Hypocrisy Was on Full Display in Gruden’s Emails

One of the hottest commodities in the minor leagues right now isn’t a fireballing pitcher or a phenom slugger. Instead, a garbage-can-flying …

One of the hottest commodities in the minor leagues right now isn’t a fireballing pitcher or a phenom slugger. Instead, a garbage-can-flying raccoon astronaut named Sprocket has captivated baseball’s lower levels.

Sprocket is the mascot for the Rocket City Trash Pandas, the Class AA affiliate of the Los Angeles Angels. And since the fall of 2018, when the team name and Sprocket were unveiled, he has helped the club in Madison, Ala., pull in more than $4 million in merchandise sales.

Even in a sport with climbing merchandise sales, the Trash Pandas’ revenue is a staggering sum for a single team. That the total was largely achieved before the team played a regular-season game makes it almost dumbfounding. (It is noteworthy that the numbers were released at all considering the tight lips of most minor league clubs.)

The Trash Pandas finally took the field this spring after the coronavirus pandemic canceled the 2020 season for all minor league teams. Rocket City merchandise continues to fly off the shelves, the team said. 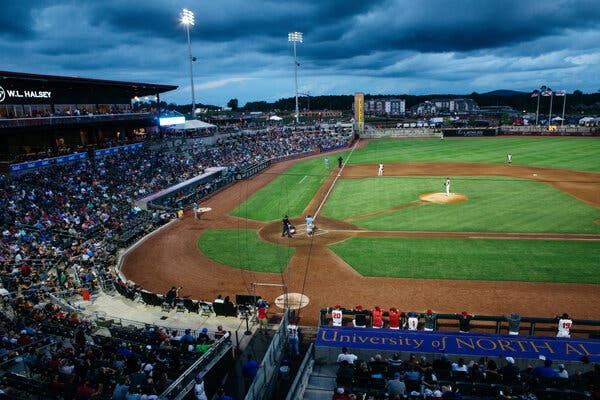 Trash Pandas merchandise was instantly popular when the team’s name was announced, and it stayed that way even when the team’s inaugural season was wiped out by the coronavirus pandemic. Credit…Charity Rachelle for The New York Times

“Since we started playing home games, we haven’t been able to keep up with the demand of our online orders and having stock in the team store,” said Lindsey Knupp, the team’s vice president for marketing, promotions and entertainment.

Success like this is nothing new for Brandiose, the sports marketing company behind the team’s merchandise boom. The Trash Pandas are following a game plan used by teams like the Amarillo Sod Poodles and the El Paso Chihuahuas, both in Texas, and the Hartford Yard Goats in Connecticut. It is a branding style that has drawn some eye rolls from critics concerned about too much uniformity from team to team, but one that has proved wildly popular.

Brandiose, which is based in San Diego, began when its founders, Jason Klein and Casey White, designed their high school’s mascot. That led to more high school logo work and to the pair eventually working out of their college dorm room. At the suggestion of a licensing colleague, they turned their hobby into a business.

Young fans like Sam Oddo don’t seem to share the internet’s criticism of Brandiose’s logos being too formulaic. Credit…Charity Rachelle for The New York Times

“We mailed letters to 150 minor league baseball teams offering our services,” Klein said. “We heard back from one.”

That team, the Class AA West Tenn Diamond Jaxx (later renamed the Jackson Generals), paved the way for Klein and White to become a dominant force in minor league branding, with dozens of teams now sporting logos designed by the company.

That storytelling, whether it comes from a space raccoon or a jumbo shrimp, is all intentional, Klein said. Outsiders may scratch their heads about the off-the-wall mascot choices, but Brandiose arrives at its choices by embracing the personality of each municipality.

Part of the company’s process is working closely with the team and community to come up with the right mascot and team name. Even if the proposals are unique, there’s a ground-level approach that involves multiple visits to the community as well as meetings with team officials, civic leaders and fans.

Jason Klein, left, and Casey White redesigned their high school’s mascot. A hobby quickly turned into a business, with the pair initially working out of a dorm room together. Credit…Maggie Shannon for The New York Times

The collaborative process results in a deep dive into a community’s identity, Klein said.

“We’re not just a rubber stamp for the team,” he said. “Actively engaging with the team staff and going back and forth, that’s what ultimately creates a successful brand.”

During the process, White, who takes the design lead, will come up with a few dozen concept sketches to show the staff for their take. “The client brings a totally fresh eye,” White said. “These are the people that are going to be wearing the logo and living with it every day.”

Brandiose also aims for an immersive experience at the ballpark, a goal Klein said came from growing up in the shadow of Disneyland in California.

“We love the idea of Disneyland being a place where you can leave your everyday troubles behind and be transported to a whole other world that’s immersive and celebrate these great American stories,” Klein said. “And the idea that we can use that same thought process to transport guests in local communities to whole other worlds is very exciting.”

At a recent home game against the Montgomery Biscuits, fans of the Trash Pandas flashed some attitude. Credit…Charity Rachelle for The New York Times

To that end, Brandiose’s work often includes items like fictional throwback uniforms, stadium signage and even concession stand products. One example: At a Chihuahuas game, you can buy nachos in a team-branded dog bowl.

That approach doesn’t guarantee an immediate warm reception from fans, though. Some in Alabama were slow to embrace the Trash Pandas name. “People didn’t want their team to be associated with trash,” Knupp said.

But, she added, the image of a savvy raccoon with a self-assembled rocket worked its magic on fans in the Huntsville-Madison area, which has long been a major hub of the space industry. The U.S. Space and Rocket Center and Space Camp are less than six miles up the road from the Trash Pandas’ stadium.

White says it’s fun to see fans get angry when the team name is announced only to have those same fans fall in love with the logo. “It’s a zinger,” he said, “like a redemption arc for a character in a movie.”

One criticism that occasionally surfaces is the uniform nature of many of Brandiose’s logos: a cute animal making an angry, intimidating grimace in three-quarters profile. Many of the mascots could seemingly be characters from the same cartoon universe.

Some of the criticism is fair to White but it comes down to the best choice creatively and logistically. “It has to look good to fans in the stands 150 feet away from the players and up close in the team store,” he said.

Klein, though, doesn’t give much thought to the idea of a “Brandiose look.” To him, it is more about a successful pattern that connects with fans.

“A parent taking their kids to a Sod Poodles game isn’t thinking about what the Lehigh Valley IronPigs logo looks like,” he said. “For us, it’s making sure that every community’s story is being uniquely told.”

Teams don’t seem concerned. Klein estimates that in a normal season, the company has 30 to 50 teams on retainer. Even on the lower end, that represents a good chunk of Minor League Baseball, which now has 120 teams after a restructuring by Major League Baseball in the winter of 2020.

Because of the brand’s growing ubiquity, and the centralization of the minor leagues, it is fair to wonder if a partnership could happen between the brand and the minor leagues as a whole, rather than individual teams.

White and Klein work with the communities where the teams play to come up with a logo and mascot that will suit the region.Credit…Maggie Shannon for The New York Times

For its part, Major League Baseball, which oversees the minors, leaves the creative decisions to the teams, offering assistance mostly with trademark issues.

“The fun and creativity of the team names and the experience, that’s what minor league baseball has been known for,” he said, adding, “This new surge of team names adds to that.”

Names like the Toledo Mud Hens and the Chattanooga Lookouts have been around for more than a century. And with the stream of new names, fans have grown accustomed to names that once felt unusual.

Names like the Akron RubberDucks and the Jacksonville Jumbo Shrimp are “benchmark entities,” said Ben Hill, a writer for MILB.com. “Like anything else, what seems insane, weird, bizarre, a little too far, starts to feel normal.”

“Ultimately, minor league baseball is a local business,” Hill added. “Yes, you want to go viral and fill orders from all over the country. But your success is predicated on filling the ballpark and getting fans in your market to embrace the brand.”

While Brandiose may have remade much of how minor league baseball markets itself, old classics like fireworks after the game are still a guaranteed crowd-pleaser.Credit…Charity Rachelle for The New York Times
ETİKETLER:
FansGameLogoSai̇dTi̇mes
BU KONUYU SOSYAL MEDYA HESAPLARINDA PAYLAŞ
Tweetle

One Game, and Tweet, at a Time, the Mets Are Sliding

A Metronome of Power Keeps the White Sox Humming

Jets’ Win Raises a Question: Who Is Mike White?

Rising Off the Mat, U.S. Rallies Past Costa Rica

For Basketball Refs, Agreeing to a Vaccine Mandate Was ‘Not That Difficult’

The Red Sox Ride a Wave of Offense Into the A.L.C.S.
ZİYARETÇİ YORUMLARI