Unvaccinated Americans are 11 times more likely to die of Covid, the C.D.C. reports.

He’s Still Fighting Developers for the Park His Father Founded

It’s Monday. We’ll look at a statue of Thomas Jefferson that will be on its way out of City Hall — if a hearing today ends with a vote to remove …

It’s Monday. We’ll look at a statue of Thomas Jefferson that will be on its way out of City Hall — if a hearing today ends with a vote to remove it. And we’ll check in on someone we met a few weeks ago who’s finally checking out of the Manhattan hotel where he has lived for 17 months. 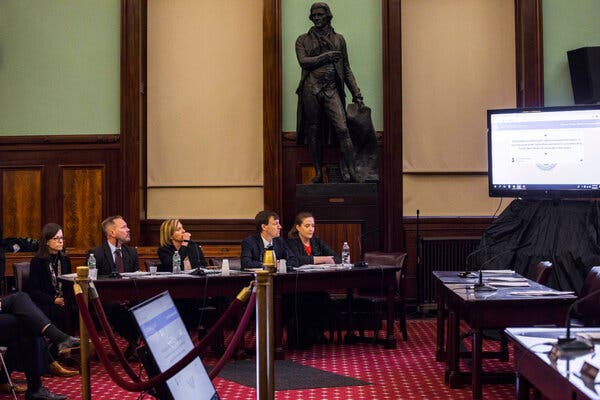 Adrienne Adams, a City Council member from Queens, said it was “the most prominent figure in the room.”

The figure is a 7-foot-tall statue of Thomas Jefferson, who wrote in the Declaration of Independence that “all men are created equal” but enslaved hundreds and believed that Black people were inferior to white people. The room is the City Council chamber. And Adams, who is Black, told my colleagues Jeffery Mays and Zachary Small that the 1830s-era statue made working there uncomfortable.

It will probably not dominate the chamber much longer. Today an obscure city body called the Public Design Commission will vote on whether to approve a long-term loan that would send it to the New-York Historical Society.

The outcome seems so certain that the society has already had a special shipping crate made.

Jefferson is a complicated figure, once revered by many, now reviled. The City Council’s Black, Latino and Asian Caucus, whose members described the statue as “oppressive” and “racist,” have long wanted it taken from its pedestal and removed from the chamber. Mayor Bill de Blasio, who has labored to find ways to address anger over monuments to public figures of the past and to designate new memorials that honor diversity, said last week that he understood why Jefferson’s history “profoundly bothers people, and why they find it’s something that can’t be ignored.”

The historical society plans to install the statue in its fortresslike building on Central Park West — though not immediately, the president and chief executive, Louise Mirrer, said.

But it will not languish in a warehouse or an out-of-the-way basement storage area, she said, adding that she “heartily” disagreed with the idea of letting it go unseen and all but forgotten.

“There are very, very difficult questions that need to be raised around the disconnect between our stated American ideals and the way in which they were not respected when it came to certain people,” she said. “I think those are topics that should not be shied away from.”

The society already had an exhibition about monuments on its calendar for early next year. Assuming the design commission gives the loan a green light today, Mirrer said, the Jefferson statue would be installed not as a part of the exhibition “but as a coordinated element” later on.

She envisions a display covering “the relationship between the founding ideals of freedom and equality set down by Jefferson and their lived experience, which included supporting slavery and owning enslaved people.”

The statue was commissioned by someone who did not own slaves, she said — Commodore Uriah Phillips Levy, the Navy’s first Jewish flag officer. Levy admired Jefferson for his views on religious freedom. The book “Saving Monticello” suggests that Levy more than admired one of Jefferson’s granddaughters: he “at least flirted with the idea” of marrying her in 1835, the author, Marc Leepson, wrote.

That was a year after Levy bought Monticello, Jefferson’s home in Charlottesville, Va., for $2,700.

Levy proudly gave the statue to the city. The city gave him an award that came not with a medal but a gold snuff box, according to Leepson. The statue was a plaster model of the one in the United States Capitol and was bronzed, so the two look more or less the same. Both were the work of Pierre-Jean David d’Angers, whom Victor Hugo called the Michelangelo of Paris.

The historical society, which has Levy’s sword in its collection and has featured him in past exhibitions, heard from officials from the City Council several months ago who asked if it would be interested in the statue. “My instant reaction was yes,” Mirrer said.

She said as a museum with a large number of visitors, most of them school children, the historical society can display an object like the Jefferson statue “to provoke people into thinking more deeply about the American past than they do in a somewhat rarefied context like the City Council chambers in City Hall.”

Finally checking out of his pandemic quarters

Robert Mallia, the only occupant of a Manhattan hotel that shut down early in the pandemic, is finally checking out of Room 307 after 17 months.

No longer will he make the rounds of the hotel — the Chatwal, at 130 West 44th Street — flushing the toilets once a week and turning the showers on and off once a month.

The Chatwal is scheduled to reopen on Nov. 1. Mallia will go home to his apartment in Long Island City, leaving the $595-a-night room to paying occupants and returning to a more conventional routine in his job as the architectural director for the Dream Hotel Group, which operates the hotel.

For the last couple of weeks, Mallia has had company during the workday — and he has had to adjust. “Just two weeks ago, if I was hearing voices, it was a bad sign,” he said. But staff members have taken their places at the check-in desk, “just to get the engine running again,” he said. Contractors have been sent in to polish the floors and do other touch-ups ahead of the reopening.

And, he said, “they’ve fired up the kitchen.”

“In the morning, I smell coffee,” said Mallia, who made his own — and mostly ordered in meals — while he stayed at the hotel.

“It’s ironic that I have to leave now that it feels like a hotel again,” he said, although work remains to be done before the first guests arrive. Mallia said on Friday that the swimming pool, drained more than a year ago, was still empty.

Mallia said he had three suitcases’ worth of clothes and shoes, many bought during his time at the Chatwal. “Closet space wasn’t an issue when you have 74 guest rooms,” he said. “Now it all has to fit in a 700-square foot apartment.”

His departure date is Saturday.

“I think they’ll give me a late checkout if I ask for one,” he said with a chuckle. “I hope they don’t hit me with a bill on the way out.”

Walking uptown on Fifth Avenue I heard Latin music blasting out of a little red car.

As the driver sped by, he had one hand on the wheel and the other was out the sunroof.

In time to the music, he was shaking a bright yellow maraca.

He Was Swept Down a Sewer Pipe. ‘I Just Let the Water Take Me.’

Are We Finally Done With Tough-Guy Politicians?

The Threat of Evictions for N.Y. Renters

Catholic Officials on Edge After Reports of Priests Using Grindr