Maryann Plunkett Says Goodbye to Her Lives in Rhinebeck

Moderna agrees to sell up to 110 million Covid vaccine doses to African countries.

The New York Philharmonic Returns, in the Midst of Transitions

I was awakened in the predawn hours by a raging downpour. Cold, howling winds were coming off the lake, and the screen door to our half-domed …

I was awakened in the predawn hours by a raging downpour. Cold, howling winds were coming off the lake, and the screen door to our half-domed shelter was flapping violently. Huddled with a few other hikers, I quickly realized the value of our lodging’s design: It’s one of the few structures that can withstand the extreme weather conditions that are a common occurrence in Patagonia. Thankfully, all of us — along with my camera gear — were safe and dry.

But it was an ominous warning of what would become one of my most exhausting and exhilarating adventures as a travel photographer. 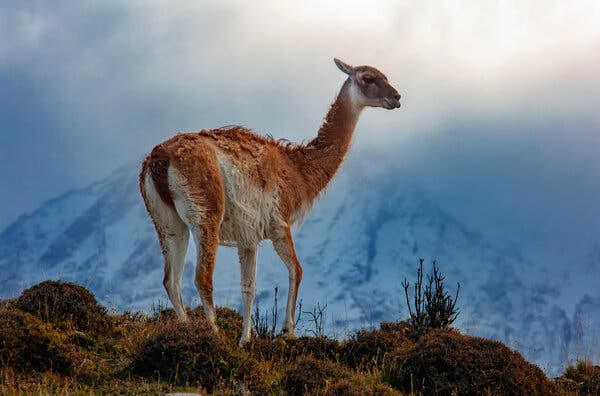 A guanaco atop a ridge. Guanacos, native to South America, are closely related to llamas.

A day earlier, baqueanos — Chilean cowboys and cowgirls — had taken me and my guide on a three-hour horseback journey over mountains and across streams to a remote drop-off location. From there, we trekked over another set of mountains and streams for five more hours to reach the remote Valle del Frances, or French Valley, a stunning place nestled between jagged mountain peaks.

The trailhead entering the French Valley was impassable due to the swollen river.

Our plan was to spend a couple of nights there, taking day hikes into the valley to see the waterfalls and gasp-worthy mountain vistas. As is often the case, however, the Patagonian weather forced us to change our plans.

Harassed by the storm, we hunkered down and waited for the unexpected squall to pass. But after a day with no relief in sight, we instead began planning our escape. But the swollen rivers were impassable, so the baqueanos couldn’t retrieve us. And the wind had created ocean-size waves in the lake, rendering boat travel too dangerous for rescue. We had only one way out: to trek 10 miles back to the lodge.

Measuring some 700 square miles, Torres del Paine National Park is home to a breathtaking array of glaciers, lakes and mountains. This lake seemed docile the day after ocean-size waves prohibited an escape.

This was no ordinary 10-mile hike. Hurricane-force winds required us to crawl up the mountainside. (Hiking upright with backpacks would have created sails and swept us off the mountain.) Crossing rivers required holding onto ropes with meticulous care, knowing that one misstep would result in our being washed away. Forget taking photos; it was impossible.

As a photographer, I’d been intrigued by the remote and rugged Patagonia landscapes for many years, voraciously devouring articles and especially photographs from the region. In time, however, I realized that I seldom saw the place depicted in autumn. Snow-capped mountains, vast plains, windswept lakes, eye-catching cowboy outfits — they were almost always seen in summertime. I set out to create what I couldn’t find.

To maximize the possibilities for seeing fall foliage, and accounting for the reversal of the seasons in the southern hemisphere, I planned my trip for mid-April. And as a base camp, I chose Las Torres Reserve, an eco-tourism destination in the heart of Torres del Paine National Park, in southern Chile.

The reserve offers a wide range of lodging options, including a luxury hotel, hostels for hikers in the backcountry and numerous campgrounds. Guests enjoy hiking and riding horses to iconic locations, including the three peaks of the Torres del Paine (“Towers of Blue”), Los Cuernos (“the Horns”) and the French Valley.

Mid-April was the perfect time to capture the peak fall colors.
The view from Las Torres to the valley below was almost as breathtaking as the park’s namesake peaks.

As enamored as I was with the remote landscape and the extreme conditions, I became equally fascinated with the baqueanos and their culture. Nursing my sore legs and back from the epic hike, I spent a day at their ranch, in the barn and corral observing them and their interactions with the horses and guests.

Although I speak some Spanish, understanding their dialect and slang was virtually impossible. No matter — their nonverbal communication told me plenty.

Baqueanos are descendants of the original Patagonian horsemen.

Baqueanos are descendants of the original horsemen who entered Patagonia more than a century ago. They sustain many of their ancestors’ traditions, including a unique clothing style and a unanimous love of yerba maté, an herbal tea, consumed throughout the day and communally shared.

Baqueanos are an integral part of the Patagonian culture.
They spend hours bathing, brushing and coddling their horses, and their tack and saddlery skills are renowned.

A genuine love for their horses was obvious. I watched for hours as baqueanos bathed, brushed and coddled the animals. They knew the horses as well as they knew their co-workers, calling their animals by name and in a tone suitable for each horse’s unique personality.

A few baqueanos live at Las Torres Reserve year round, while others are brought in from area ranches for seasonal work. Regardless of their tenures, they all appeared to endure some of the harshest weather on earth while providing expert care for the horses and the lodge guests.

As a travel photographer, I’ve come to realize that, the more challenging it is to get to a location, the fewer people who visit. And Patagonia is certainly hard to reach: It took a nine-hour flight from Miami to Santiago, Chile, followed by another four-hour flight to Punta Arenas in southern Chile, and finally a five-hour drive to Torres del Paine National Park.

I’ve also learned that it’s more rewarding if I take the time to experience a place rather than simply seeing it. And the baqueanos at Las Torres Reserve facilitated exactly that kind of meaningful cultural immersion.

Scott Baker is a photographer based in Miami Beach, Fla. You can follow his work on Instagram.

Charities and aid groups in Haiti have been marked by scandals in the past decade.

Hostels, Havens for the Thrifty, Fight to Survive the Pandemic