Marie Wilcox, Who Saved Her Native Language From Extinction, Dies at 87

For many years, Marie Wilcox was the guardian of the Wukchumni language, one of several Indigenous languages that were once common in Central …

For many years, Marie Wilcox was the guardian of the Wukchumni language, one of several Indigenous languages that were once common in Central California but have either disappeared or nearly disappeared. She was the only person for a time who could speak it fluently.

She started writing down words in Wukchumni as she remembered them in the late 1990s, scrawling on the backs of envelopes and slips of paper. Then she started typing them into an old boxy computer. Soon she was getting up early to devote her day to gathering words and working into the night.

After 20 years of labor, of hunting and pecking on her keyboard, Ms. Wilcox, who died at 87 on Sept. 25, produced a dictionary, the first known complete compendium of Wukchumni.

“The dictionary was her whole life,” Jennifer Malone, one of her daughters, said in a phone interview. “The language was dying, and she brought it back.”

In 2014, while Ms. Wilcox was still revising and editing the dictionary, the filmmaker Emmanuel Vaughan-Lee made “Marie’s Dictionary,” a short documentary video about her achievement for The New York Times Opinion section, in its Op-Docs series.

A short documentary, “Marie’s Dictionary,” was made in 2014 about Ms. Wilcox, inspiring her family to learn Wukchumni.Credit…Vanessa Carr

When her large extended family held a party and watched the documentary together, they understood for the first time what she had been doing all those years, said Ms. Malone, who, with a handful of others, helped her mother edit and format the dictionary. Until then, she said, they had not fully appreciated her work or valued the connection between their lost language and some of their cultural traditions.

Within short order, many family members started learning Wukchumni. And other Native American tribes were inspired by her story to revitalize their own disappearing languages.

Ms. Wilcox died at a hospital in Visalia, in Central California. She had been attending a birthday party for her 4-year-old great-great grandson when she was stricken by a ruptured aorta as she was getting in a car to leave, Ms. Malone said.

There are an estimated 7,000 languages in the world today, a majority of which originated with Indigenous people. Many of these are only spoken, not written, and they have no dictionaries. Because of forced assimilation, relocation and other factors involving Native people, most of these languages are on the verge of dying out.

Ms. Wilcox’s dictionary was copyrighted in 2019 but has yet to be published.

After one of her elderly relatives died about eight years ago, Ms. Wilcox became the only person fluent in Wukchumni, a dialect of Tule-Kaweah, which originated near the Tule and Kaweah Rivers in Central California.

“It seems weird that I am the last one,” she told Mr. Vaughan-Lee, the filmmaker. “It’ll just be gone one of these days.”

But long before she became the only fluent speaker, Ms. Wilcox had become fixated on creating a lasting record of Wukchumni. Her grandmother, who took care of her as a child, had spoken it, and Ms. Wilcox had started out creating her dictionary as a tribute to the grandmother, Ms. Malone said. The dictionary was copyrighted in 2019 but has yet to be published; Ms. Wilcox also recorded the words so that others would know the correct pronunciation.

After the documentary came out, learning the language became a collective effort across four generations of Ms. Wilcox’s family. Her 4-year-old great-great grandson, Oliver Treglown, was being raised to speak it from birth. Interest also picked up within the Visalia community, where Ms. Malone teaches the language at the Owens Valley Career Development Center.

“Learning this language has brought the family closer together,” Ms. Malone said. “Mom inspired people to want to learn.” 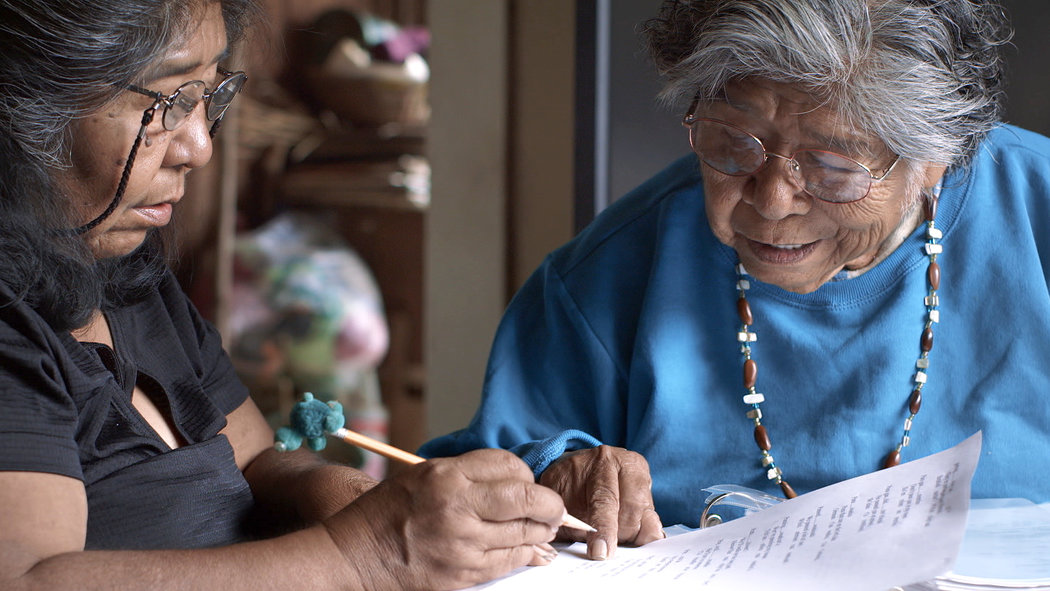 This short documentary profiles the last fluent speaker of Wukchumni, a Native American language, and her creation of a comprehensive dictionary.

Marie Desma Wilcox was born on Nov. 24, 1933, on a ranch in Visalia, in the San Joaquin Valley. Her father, Alex Wilcox, was a farm hand. Her mother, Beatrice Arancis, had seven children, of which Marie was the youngest. She often referred to herself as “the end of the trail.”

Marie grew up with her grandparents in a one-room house in the Venice Hills mountains near Sequoia National Park. After she finished the eighth grade, she went to work in the fields as a farm hand herself, mostly picking fruit.

She had four daughters and one son with Joe Garcia, and those four sisters married four of the Malone brothers. In addition to her daughter Jennifer Malone, Ms. Wilcox is survived by another daughter, Evelyn Malone; 10 grandchildren; 33 great-grandchildren; and 18 great-great grandchildren.

Among those who helped Ms. Wilcox with her dictionary, particularly with her computer, was Nicholas Luna, 27, an Apache whom Ms. Wilcox brought into her family. Mr. Luna said in an interview that when the family viewed the documentary in 2014, “it gave them a sense of purpose.”

“She was training us, and, boy, did she train us well,” he said. “She lit a fire under me and others to keep on speaking the language and to keep going at it. Now I dream in the Wukchumni language.”