England will remove the last seven countries on its restricted-travel ‘red list.’

‘Insecure’ Season 5, Episode 1 Recap: No Time to Be Insecure

Haiti lies in the possible path of Tropical Storm Grace.

The setting is both beautiful and ugly, resplendent and run-down. Green foliage wraps around rusting mills, no longer in use; steep hills drop …

The setting is both beautiful and ugly, resplendent and run-down. Green foliage wraps around rusting mills, no longer in use; steep hills drop off to the river, like the plummeting dreams of local residents.

This is the Monongahela Valley, home to the new nine-episode Showtime series “American Rust,” debuting Sept. 12. Encompassing parts of Pennsylvania and West Virginia, the Mon Valley, as locals call it, is steel country, which means it has been hit hard in recent decades. Unemployment runs rampant. So does opioid abuse.

Based on Philipp Meyer’s debut novel from 2009, “American Rust” tells a story of those who call the Mon home, those who want to leave and those who can’t seem to, no matter how hard they try.

“It’s like a gravitational pull,” Jeff Daniels said in a recent video call from his Michigan home. Daniels plays Del Harris, the police chief of the fictional town of Buell, which the book situates about 30 miles south of Pittsburgh in Fayette County, Pa., near the real-life towns of Belle Vernon, Fayette City and Monessen. 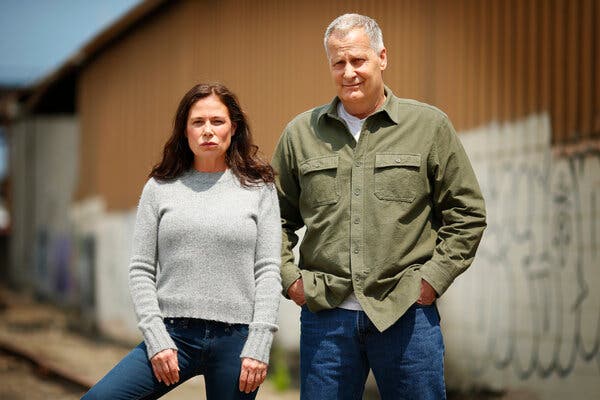 Maura Tierney plays Grace Poe, whose romance with the local sheriff, played by Jeff Daniels, becomes very complicated when her son becomes involved in a murder.Credit…Jared Wickerham for The New York Times

Chief Harris lives a complicated life. He is in love with Grace Poe (Maura Tierney), who sews at a local dress factory and lives in a trailer on the verge of foreclosure. Grace’s son, Billy (Alex Neustaedter), who chose to stay in Buell instead of accepting a Division I football scholarship, keeps getting caught up in violent crime, including a murder.

You could say the chief is compromised by his circumstances and passions.

He isn’t the only one. Billy’s best (and perhaps only) friend, Isaac English (David Alvarez), is also the brother of the woman who broke his heart, Lee (Julia Mayorga) — and that may be the least of their friendship’s complications. Meanwhile, Isaac and Lee have troubles of their own: Their father (Bill Camp) was nearly killed in a mill accident, and their mother committed suicide by walking into the river with pockets full or rocks, like Virginia Woolf.

Lee, though married and living in New York — she is the rare character in “American Rust” who has managed to escape — finds herself drawn back to Billy nonetheless. Isaac remains trapped at home, forced to care for an angry, wheelchair-bound father who constantly belittles him.

“Any one of these characters could pack up their car and just leave, but they don’t,” Daniels said. “Maybe they can’t. Maybe they’ve got nowhere else to go. They’re at the bottom.”

Daniels’s road to Buell began over 10 years ago when he went to see Meyer read from his novel in New York. Daniels was struck by how Meyer located the humanity of characters who don’t get a lot of cultural shine, characters he knows from having spent most of his life in Michigan.

“Nobody’s famous,” Daniels said. “Nobody’s trending. These are just everyday normal people that are in every corner of every county in this country.”

Meyer grew up in a blue-collar area of Baltimore in the ’80s, when he watched various industries — textile, shipyards, steel, auto — slowly decline. “Violent crime was super high,” Meyer said from his home in Austin. “But it was also clear that you had this giant population of unemployed young men, guys in their 20s and 30s who had been laid off last year or four years ago or five years ago. The American dream had failed them.”

Monessen, like the fictional town of Buell, has struggled since the local steel industry collapsed.  Credit…Jared Wickerham for The New York Times

But for his first novel, he decided Baltimore, with its many industries, was too complicated for what he had in mind. When he visited Pittsburgh, where his brother was in college, Meyer realized, “This is where I put the story.”

Soon after Daniels met Meyer, the actor was knee-deep in “The Newsroom” (2012-14) and other projects. But “Rust” never left his mind. His father, Robert Lee Daniels, had been the mayor of Daniels’s hometown, Chelsea, Mich., and owned a lumber yard. Daniels recognized the characters in “American Rust.”

So when he found the bandwidth, he sought out two writer-producers with whom he had worked on a TV adaptation of another acclaimed book, “The Looming Tower”: Dan Futterman and Adam Rapp. (They, along with Daniels, are among the executive producers.)

Futterman, the showrunner of “Rust,” recalled the question Daniels asked: “‘If you love it, would you remind me what I love about it?’”

Charleroi, Pa., is held up in the novel “American Rust” as an example of a Rust Belt town that is beginning to revitalize.Credit…Jared Wickerham for The New York Times

“I told him that I loved what felt to me like a central theme of the book and something that I have written about before,” Futterman said from his New York home. “Can you both love somebody and use them at the same time?”

Put another way, what terrible things are we willing to do in the name of love? And what kinds of things might a police chief overlook?

The apple of Chief Harris’s eye, his moral blind spot, is Tierney’s Grace, who loves the chief but also knows he can come in handy.

“I don’t know if anyone’s ever loved her, and I think she’s made a lot of choices based on that,” Tierney said in a video call from New York. “That’s an interesting person to try to get inside of.”

“She’s had to really make her own way, every which way,” she continued. “Then she’s got this fierce devotion to her child, who I think she’s trying to compensate for somehow, but I don’t know if that’s the smartest thing to do. She’s a flawed person who’s trying to just keep her head above water.”

Before the shoot, Daniels sent Tierney an email. “I’m not a big chatter,” he wrote, “but if you want to chat, I’m happy to do that. Or if you want to just jump off the cliff, let’s do that.”

She wanted to jump off the cliff. And so did he.

The ArcelorMittal coke works near downtown Monessen.Credit…Jared Wickerham for The New York Times

“I don’t enjoy over-talking things,” she said. “We’ve both been doing this for a really long time. So it’s really enjoyable to just show up and know that your partner in the work is going to be prepared, and we just would let it fly.”

As with any adaptation, “American Rust” took some intriguing detours on the way from page to screen. Grace is now a union organizer, quite a challenge in a company town where many workers are immigrants who don’t speak English. Isaac’s personal journey has been rerouted. His and Lee’s Mexican heritage has been more fully fleshed out. The story’s central crime is now a mystery, not only to most of the town but also to the viewers.

While Meyer wasn’t involved with the series, he is thrilled with the results.

“I don’t know if anyone’s ever loved her, and I think she’s made a lot of choices based on that,” Tierney said of her character. “That’s an interesting person to try to get inside of.”Credit…Jared Wickerham for The New York Times
Details add authenticity to the wall of a set in Pittsburgh designed to look like a Mon Valley bar. Credit…Jared Wickerham for The New York Times

“I’m pretty overjoyed that it has made it onto the air,” he said. “When people think of the middle of the country, maybe they think of ‘Yellowstone,’ which is a fun show but more fantasy than reality. This is the story of what’s happening to about half of America that we don’t really hear that much about.”

There’s a sense in “American Rust” that everyone is doing his or her best, which isn’t always good enough in a land beset by fatalism and inertia. In researching the place and the people, Daniels came to see them for what they are — and aren’t.

“They’re not just a bunch of hopeless addicts,” Daniels said.“Much like the people in the series that Danny pulled out of the book, these are good people who have to make bad choices just to either survive or to hold onto their dignity.”

Pittsburgh, once known as Steel City, has a population of less than half what it was at its peak in the 1950s. Still, the city has been revitalized in recent decades, having successfully diversified its economy after the steel industry collapsed. Cast and crew shot interiors at 31st Street Studios, a home for dozens of film and TV productions to date. Futterman described a city in the midst of a tech and art resurgence, with a vibrant theater scene.

It’s when you travel outside of Pittsburgh that you notice what’s gone. The economic downturn has left towns like Donora, Monessen and Rankin as shells of their former selves. This is where the bulk of “American Rust” unfolds and where much of the show was shot. (As in “Mare of Easttown,” another Pennsylvania gothic drama, the Rolling Rock and ruins abound.)

“This is the story of what’s happening to about half of America that we don’t really hear that much about,” said Philipp Meyer, who wrote the novel on which the series is based.Credit…Jared Wickerham for The New York Times

“There are some places where the steel mills are still going, and some where they’re just gone,” Futterman said. “In the town of Buell, it’s gone. The steel mill is shut down, and you can feel the reverberations of that throughout the town, and through all the people that are affected by it in some way.”

And yet, the region retains a haunting beauty.

“There are these steep drop-offs down to the river and all these steel bridges,” Futterman said. “There are a lot steel mills, some semi-functional, some rusting back into the ground right on the shores of the river. It’s not like other places I’ve been.”

Meyer describes the landscape with stark lyricism in the novel: “The mill itself had been like a small city, but they had closed it in 1987, partially dismantled it 10 years later; it now stood like an ancient ruin, its buildings grown over with bittersweet vine, devil’s tear thumb and tree of heaven. The footprints of deer and coyotes crisscrossed the grounds; there was only the occasional human squatter.”

It can seem desolate. But for Daniels, it all boils down to the most basic human emotions.

“They’re all seeking love, and they’re capable of hate,” he said. “They’re capable of everything. When they’re backed up against the wall, these people are just trying to survive, doing whatever at that point, and trying to hang onto a sense of what’s right and what’s wrong. That’s what makes it interesting to me.”

Musicals Return to Broadway With ‘Waitress’ and ‘Hadestown’

Fake Parties and Cloned Candidates: How the Kremlin ‘Manages’ Democracy

Take a Journey With Dev Patel in ‘The Green Knight’