On Matters of Race, Randall Kennedy Demands Thinking Over Feeling

John Grisham on Judges, Innocence and the Judgments He Ignores

Stephen King Pays His Dues in a ‘One Last Job’ Novel

He Stayed Grounded by Writing a Thriller Set in Outer Space

In his long and varied career, the Canadian astronaut Chris Hadfield has flown fighter jets, walked in space and orbited the earth for months …

In his long and varied career, the Canadian astronaut Chris Hadfield has flown fighter jets, walked in space and orbited the earth for months while commanding the International Space Station. But until earlier this year, he never had to face the stomach-churning professional challenge of turning in a novel and learning that your editors think it is 35,000 words too long.

“They sent me back the first 30 pages, and I thought, ‘You have removed a whole bunch of words and ideas that, I’m pretty sure, are germane to what’s happening,’” Hadfield said in a video interview at the end of August. He sounded cheerful about it, considering. Eventually, he began to trust the process, he said, to internalize the notion that “writers and editors have different skill sets and you need them both,” and even to understand that less can sometimes be more.

What emerged was “The Apollo Murders,” slimmed down by a third and now 480 pages long. The novel, which Mulholland Books released this week, is set in the American space program in the late 1960s and early ’70s, a time of swaggering ambition and Cold War anxiety. Featuring undercover spies, scheming Russians and psychopathic murderers, sometimes all at once, it teems with authoritative details about what it might be like, for instance, to throw up in space or to grapple with a deadly Soviet astronaut who assaults you during a spacewalk.

Early buzz is good. Publishers Weekly described it as a “spectacular alternate-history thriller,” an “intelligent and surprising nail-biter.”

Calling Hadfield, who is 62, Canada’s most famous astronaut might seem like an oxymoron, or even a punchline, but he is probably the most famous living astronaut of any nationality in the modern era. (Leaving aside billionaire wannabe astronauts.) This is partly because his haunting 2013 performance of David Bowie’s “Space Oddity” while aboard the Space Station — literally floating far above the world — has been viewed more than 50 million times. That has a way of raising a person’s profile.

It is partly due, too, to Hadfield’s gregarious nature, extensive social media presence (he has 2.3 million followers on Twitter and 373,000 on Instagram), TED talks, public speaking and teaching jobs, consulting work and best-selling 2013 book, “An Astronaut’s Guide to Life on Earth.” During the darkest days of lockdown, Hadfield emerged as a go-to comforter of the afflicted, dispensing advice on how to deal with uncertainty, loneliness and isolation.

“A spaceship is like a pandemic to its wildest extremes,” he said. “It’s truly life and death, you can’t ever go outside, you don’t know how long this is going to last, bad things can happen any moment, and you don’t have any other company.”

Wearing a salmon-colored T-shirt, his mustache a little grayer than in his “Space Oddity” days, Hadfield was speaking from the cottage he shares with his wife of nearly 40 years, Helene, on a tiny island near the Ontario-Michigan border. They live mostly in Toronto but spent the bulk of the pandemic in their little house here, built in the late 19th century.

Hadfield was born in southern Ontario, became a fighter pilot and then a test pilot for the Canadian Armed Forces and was accepted to the astronaut program in the Canadian Space Agency. (Yes, Canada has a space agency.) Earning degrees in engineering and aviation systems, he was assigned by the Canadian agency to work with NASA. His many jobs included serving as capsule communicator, or the voice of mission control on the ground, for two dozen space shuttle missions.

Hadfield also lived in Star City, Russia, for two years, as the director of operations for NASA at the Yuri Gagarin Cosmonaut Training Center, in charge of coordinating and directing crew activities for the International Space Station, a multinational program. He did three tours in space himself, and spent five months aboard the space station as its first Canadian commander.

He retired in 2013 and did not want to succumb to the ennui that envelops many ex-astronauts who feel that their best days are behind them.

“The Apollo Murders” was published this week.

“We saw too many people who had retired and floundered,” Helene Hadfield said in a follow-up interview. “We’d been talking about it for years, what makes someone happy, and one of the plans for our post-astronaut life was that he would write a book.”

Her husband set out to write a golden-age space thriller, but he didn’t want to tamper with the past by putting real astronauts in fake situations. So he invented an alternate history, in which Apollo 18 — a real mission that was canceled during the Nixon administration — went ahead, as a spy mission.

“Right after Apollo 17 is an incredibly ripe time,” he said. “The politics of the time — the end of the war and the rise of women’s rights — was a lovely cultural crucible to put this story into.” A lot was going on in the space race with the Soviets, too, and Hadfield was able to weave into his story the mysterious demise of two Russian vessels that malfunctioned and became inoperable under murky conditions.

He made his hero a decorated fighter pilot who, having lost an eye after his plane collided with a bird, orchestrates the mission from the ground and begins to believe that something, or someone, is not right on the spaceship. Hadfield based the character’s back story in part on his own experience when he hit a sea gull while flying an F-18 over the Chesapeake. In that case, the plane was badly mangled, but Hadfield wasn’t.

Having never written a novel before, Hadfield did prodigious research, in part by rereading books by some of his favorite writers, like Dick Francis, John D. MacDonald and James Michener. He took a fiction master class; he read Stephen King’s great memoir-cum-manual, “On Writing”; he fretted. 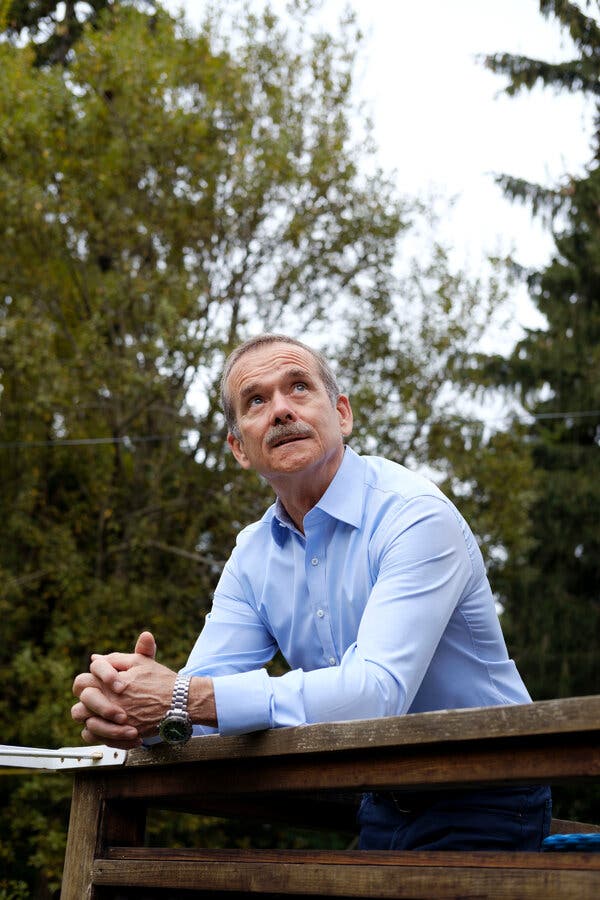 Chris Hadfield at his home in Toronto.Credit…Angela Lewis for The New York Times

“He was so scared, but I knew it would be good,” his wife said.

Hadfield also recalled a conversation he had with Neil Young while aboard the Space Station. “This sounds like a stupid thing to say, but when you’re living on the spaceship, they ask you who on Earth you would like to talk to for psychological support, and then they see if they can get them,” he said.

But Young did call. The astronaut spoke from space; the musician spoke from the back seat of his now-converted-to-hybrid 1959 Lincoln Continental, where the internet connection was better than in the house, apparently.

They talked for nearly an hour, and Young gave Hadfield some creative advice.

Hadfield is currently about 10,000 words into his next novel, he said, and is mulling over whether to start it right before the Yom Kippur War, in 1973.

“It provides a wonderfully tumultuous backdrop to something I want to happen to be able to give me the plot threads I need,” he said. “I’ve by no means solved all the problems yet.”

Hadfield sounded oddly happy about that, too. “I’ve got nothing but corners I’ve painted myself into.”

Questlove Looks at 50 Years of Modern Music — and Modern History

How Literature by Black Authors Shaped One Scholar’s Life

For This Basketball Team, a Championship Was Just the First Challenge

John Grisham on Judges, Innocence and the Judgments He Ignores
ZİYARETÇİ YORUMLARI