What We Learned From Week 6 in the N.F.L.

Was That Bunt Weird or Is Your Manager Mike Matheny?

Eyeing the SEC, Oklahoma and Texas Plan to Leave the Big 12

On a Windy Night in L.A., One Run Is Enough for the Giants

FIFA Will Share in $200 Million Payout From Justice Department

Dispatch From the Paralympics

TOKYO — The first week of the Paralympics yielded several breakthrough moments, including a first for an ostensibly mixed-gender sport, a gold …

TOKYO — The first week of the Paralympics yielded several breakthrough moments, including a first for an ostensibly mixed-gender sport, a gold medal for a country that had never claimed one, and a five-time swimming champion who switched sports and struck gold again.

The wheelchair rugby tournament had four female athletes, more than ever before, and one of them won the first gold medal ever awarded to a woman in the sport. The woman, Kylie Grimes, played for Britain’s first Paralympic championship team in the sport, which appeared as a demonstration sport at the 1996 Atlanta Games and debuted as a full medal sport in 2000. Japan, Denmark and Australia also each had a female player.

On Day 1, Denmark pulled off a big upset in its first-ever Paralympic rugby game by defeating Australia, the two-time reigning champion.

Two countries had breakthrough moments in the opening week: Chile got its first-ever Paralympic gold medal in swimming, from Alberto Abarza, who won the men’s S2 100-meter backstroke, and El Salvador got its first-ever medal, from Herbert Aceituno, a powerlifter who won bronze in the men’s 59-kilogram event.

Brad Snyder, an American who won five swimming gold medals in the two previous Paralympics, got a sixth in a different sport, winning the individual PTVI triathlon event.

Kendall Gretsch won the women’s individual PTWC triathlon race, becoming the fifth American to win a gold medal at both a summer and winter Paralympic Games. Gretsch had won gold in the 6-kilometer biathlon and the 12-kilometer cross-country skiing races in her Paralympic debut in Pyeongchang in 2018. 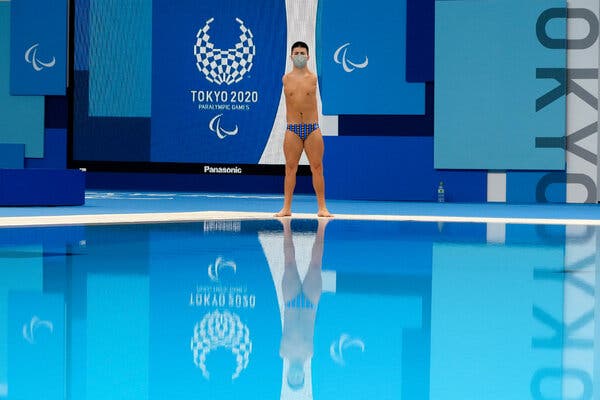 Abbas Karimi, a refugee from Afghanistan, entered the opening ceremony as the flag bearer for the refugee team.

Matt Stutzman of the United States, who styles himself as the “Armless Archer,” won in the 1/16 elimination round for the men’s individual compound event, but did not make it past the next round. “I am going to come back stronger,” he said.
Brian Bell of the United States defending against Thomas Boehme of Germany during a first-round basketball game won by the U.S., 58-55.
Two U.S. players moving to block a shot during a preliminary-round goalball match against Brazil. The U.S. won, 6-4.
Dandan Hu of China lifted 120 kilograms to win the gold medal in the women’s 50-kilogram final. Hu won the 45-kilogram category at the Rio Paralympics.
Ibrahim Elhussein Hamadtou of Egypt faced Hong Kyu Park of South Korea in a table tennis match on Day 1 of the Games.
The swimming portion of the men’s PTS5 triathlon at the Odaiba Marine Park.
Martin Schulz of Germany after winning gold in the men’s PTS5 triathlon. He had won the PT4 race at the Rio Games.
Claire Cashmore of Britain finished third in the women’s PTS5 triathlon. She won her first medal in triathlon after claiming multiple swimming medals in past Paralympics.
Mami Tani of Japan was helped by swim exit assistants during a triathlon.
Marco Cicchetti of Italy competing in a long jump final.
Linda Patricia Perez Lopez of Venezuela with her guide during a preliminary race for women’s T11 100 meters. She won gold in the final.
Tobias Jonsson of Sweden finished seventh in the T12 men’s long jump final.
Hagan Landry of the United States after the throw that won him silver in the men’s shot put F41 final.
ETİKETLER:
GameHadSportWhoWon
BU KONUYU SOSYAL MEDYA HESAPLARINDA PAYLAŞ
Tweetle

The Friendship That Shapes Atlanta Baseball

Sunisa Lee’s Next Big Move After the Olympics: College

A Resort Developer Who Puts the Emphasis on Golf, Not Real Estate

Are the Jets and Giants Watchable Yet?

The Olympics Are All Fun, No Games on TikTok
ZİYARETÇİ YORUMLARI