How Black Foragers Find Freedom in the Natural World

Why Do American Grocery Stores Still Have an Ethnic Aisle?

How to Sell Good, Inexpensive Wines Without Pandering

CheLi Is One of New York’s Most Impressive Chinese Restaurants

Have you walked down St. Marks Place lately, the block between Second and Third Avenues? Since the onset of outdoor dining it looks like the …

Have you walked down St. Marks Place lately, the block between Second and Third Avenues? Since the onset of outdoor dining it looks like the noodle bar scene in “Blade Runner,” although the weather is usually better.

The profusely zippered tartan trousers at Trash and Vaudeville decamped for another street long ago. Gone, too, are the lipsticks and hair dyes that Manic Panic stocked in every color not in the rainbow; the ink-smeared issues of Maximumrocknroll at St. Mark’s Comics; the first pressings of the Slits and Bad Brains hiding in the bins at Sounds; and all the other flotsam and jetsam of the post-punk era. In those days, there never was much to eat on that strip aside from kebabs at Khyber Pass and the hijiki tofu burgers at Dojo. Everybody seemed to subsist on hair spray fumes and cigarettes.

Now, the block’s major draw is Chinese and Japanese food from tightly clustered, improbably narrow storefronts. From Friday afternoon to Sunday night the block is closed to traffic, and people gobble dumplings and suck up noodles at tables on the sidewalk and street. Most of the food is fast and decent enough, if not particularly memorable. About a year ago, though, above a Japanese creperie, a new place appeared that is not only the first really good restaurant the block has seen in at least three decades, but also one of the most impressive Chinese restaurants on any block in town. 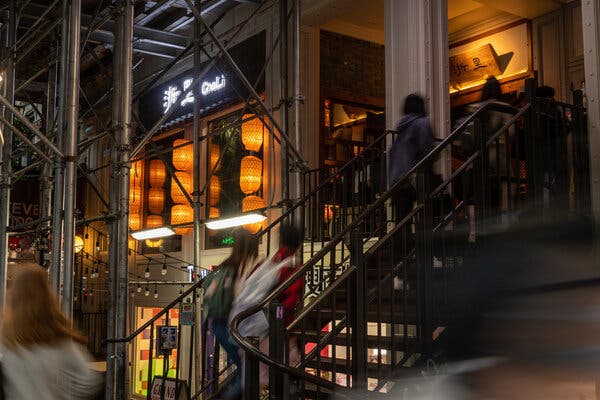 CheLi’s strip of St. Marks Place is no longer a living museum of punk.Credit…Evan Sung for The New York Times

Called CheLi, it specializes in the cuisine of Shanghai and the surrounding Jiangnan region. Inside, the dining room looks like a small, prerevolutionary Chinese village, although a few walls have been removed, which makes it easier to get to your table. Paper lanterns dangle here and there. Set on shelves overhead, at the level of the sloping roofs of overlapping curved tiles held up by wooden posts, are clay vessels of the kind traditionally used for turning rice and other grains into wine.

The menu has an antique look, too. Between cloth covers tied by a cord, it is supposedly styled after a census ledger, one row per dish, with names in English and Chinese. It gives an account of certain aspects of the food of Jiangnan as interpreted by CheLi’s chef, Wang Lin Qun, particularly the seafood cooking of the Yangtze River towns and the South China Sea coast. The flavors are gentle, soft and almost transparent; you can taste the main ingredients just under the seasonings.

Aromatic Shaoxing wine ripples through many dishes; its sweetness, and that of the occasional pinch of sugar, is at least as important as soy sauce in this kitchen. Shaoxing is the wine in wine-soaked chicken, a paradigmatic dish of Shanghai, served in pale, cool white slabs, each ornamented with a goji berry. It turns up again in wine-soaked crab, but this time it has a caramel sweetness that you extract with the East Coast blue crab flesh from all its hiding places in the shell.

Either appetizer is as good a way as any to prepare your palate for the rest of your meal at CheLi, although a strong case could also be made for the smoked fish. We are far removed from sliced sturgeon at Barney Greengrass: The fish is in fact fried, not smoked, and then covered in an inky-brown glaze, dark with soy, both sweet and sour but with the emphasis on sweet. If you are lucky, you will have a few minutes to separate the fish from its bones, licking off the sauce as you search for the smoke you never quite taste, before the kitchen sends out everything else you ordered.

Despite the speed, the subtle contours of Mr. Wang’s cooking rarely blur. Shaoxing invisibly seasons the long pale-green ribbons of warm loofah that call to mind braised cucumbers. And green Dragon Well tea perfumes the Longjing shrimp that arrive in a swirl of dry-ice mist. Their sweetness is set against a tart black-vinegar dipping sauce similar to the one that comes with xiao long bao.

At CheLi, xiao long bao are not the gummy, sloshy water balloons you sometimes meet. They are exemplary, in fact, the skins rolled so thin they drape like silk around the fillings, which are almost equally soupy and solid.

Somebody at the table is almost guaranteed to want some xiao long bao, but don’t ignore the other dim sum. The Song Dynasty steamed bun is a low, unfilled dome the size of a whoopee cushion, stamped with the restaurant’s name in red Chinese characters; it’s completely plain and completely pleasurable, alone or dipped into its syrupy sauce. Sticky-rice crepes rolled around crushed peanuts and brown sugar show up speared on the ends of wooden picks that are held in a flower vase with a sprig of baby’s breath. They are chewy, crunchy little delights, even though they look as if they were delivered by Edible Arrangements.

The Song Dynasty steamed bun is stamped with the restaurant’s name.Credit…Evan Sung for The New York Times

As the dishes get bigger, so does their intensity. Tofu stewed with peas and carrots sounds like a snooze, but bobs in a broth of unexpected depth. Threads of crab weave through a layered, deeply savory stew thickened and colored pink-orange by dried peach tree sap; little clumps of the chewy resin are suspended in the broth like free-form gummy candies.

CheLi serves red-braised pork belly in its Shanghainese version, still rich and sticky with caramel but less spicy than what you’ll find in a Hunanese restaurant.

When fresh or dried chiles appear they are used as accents, not as Sichuan- or Hunanese-style depth charges. Even the angry red layer of pure chile oil on top of the mao xue wang — a stew that unites ham, beef and shrimp with frilly lengths of intestine and triangular tiles of thickened duck’s blood — is more restrained than it would be in Sichuan cooking.

Cubes of fried tofu the size of casino dice are rolled in a spice rub that quietly suggests the hot-and-numbing mala effect. Linguine-like strands of crisp intestine, called Pieces of Jade, are dressed in a spicy chimichurri that jabs sharply but doesn’t go for a lights-out punch. Fresh green and red chiles are tossed with a fistful of sesame seeds over a fish head big enough to feed a family, but the taste you remember is only the mild spiciness that comes from the deep, hypnotic, sweet-and-salty broth. The dish, named after an 18th-century emperor, is called Qianlong’s Favorite Fish Head. It’s mine, too.

The desserts are supervised by Fang Fang, the pastry chef. Among other treats is Meiling congee, rice cooked into porridge with sweet white yams and fresh soy milk. With her husband, Mr. Wang, Ms. Fang is busy opening a second branch of CheLi in the same little plaza in downtown Flushing, Queens, where you can find the original Szechuan Mountain House battling it out for citywide Sichuan supremacy with the mighty Guan Fu.

There is, of course, more Shaoxing wine to drink, including a barrel-aged variety made by Shikumen that tastes of cocktail almonds. It goes down remarkably well in alternating sips with the Dragon Well tea that servers refresh throughout the meal. After a glass or two of wine, it seems unlikely that this space was once home to Andy Warhol’s Exploding Plastic Inevitable, with its strobe lights and films projected on the walls while the house band, the Velvet Underground, sang about needles and whips. Or maybe it makes perfect sense. Another carafe of Shaoxing will surely clear it all up.

What the Stars Mean Because of the pandemic, restaurants are not being given star ratings.

Say Hello to the Tortizza, a Dinner Life Raft

Preserving the Season at Its Peak

A Mississippi Restaurant Has Been Beloved for Decades. But There’s Another Story to Tell.

Oysters, in the Form of a C.S.A.
ZİYARETÇİ YORUMLARI