‘The Beginning of the Snowball’: Supply-Chain Snarls Reach Publishing

A Tabloid Ally of Trump and Weinstein Reboots Himself

Snopes Retracts 60 Articles Plagiarized by Co-Founder: ‘Our Staff Are Gutted’

Netflix and ‘The Queen’s Gambit’ dominate the Creative Arts Emmys.

How the U.S. Helped, and Hampered, the Escape of Afghan Journalists

Their Thai Cave Rescue Film Was Done. Then 87 Hours of Footage Arrived.

Stymied Before, Trump Finds Backing for His Own Media Venture
Anasayfa » Foto Galeri » Can Paramount+ Succeed? One Producer Hopes to Make It So.

Can Paramount+ Succeed? One Producer Hopes to Make It So.

Like so many other writer-directors, Alex Kurtzman grew up worshiping film. But he is adaptable — and in the streaming era, that is a very …

Like so many other writer-directors, Alex Kurtzman grew up worshiping film.

But he is adaptable — and in the streaming era, that is a very lucrative trait.

Mr. Kurtzman, the onetime writer of the “Transformers” movies and the director of the 2017 film “The Mummy,”recently renegotiated his deal at CBS Studios into one of the richest there. Under the $160 million, five-and-a-half-year agreement, he will continue to shepherd the growing “Star Trek” television universe for ViacomCBS’s Paramount+ streaming platform.

He will also create shows, including a limited series based on “The Man Who Fell to Earth,” which he will direct for Showtime, and the long-awaited adaptation of Michael Chabon’s Pulitzer Prize-winning novel, “The Amazing Adventures of Kavalier & Clay.” That limited series is likely to be sold to an outside streaming service.

Mr. Kurtzman’s deal is the latest in a string intended to give prolific producers, like Shonda Rhimes and Ryan Murphy for Netflix and Jordan Peele with Amazon Studios, free rein to create content that can feed insatiable consumer appetites and hopefully boost subscriptions for streaming. This one puts the ambitions of CBS Studios — the production arm for the networks and channels under the ViacomCBS umbrella — squarely in the hands of the 47-year-old Mr. Kurtzman.

“From the first meeting I had with Alex, it was so obvious to me that he’s our future,” George Cheeks, the president and chief executive of the CBS Entertainment Group, said in an interview. “The guy can develop for broadcast. He can develop for premium streaming, broad streaming. He understands the business. He’s got tremendous empathy. He’s creatively nimble.

“When you make these investments,” Mr. Cheeks continued, “you need to know that this talent can actually deliver multiple projects at the same time across multiple platforms.” 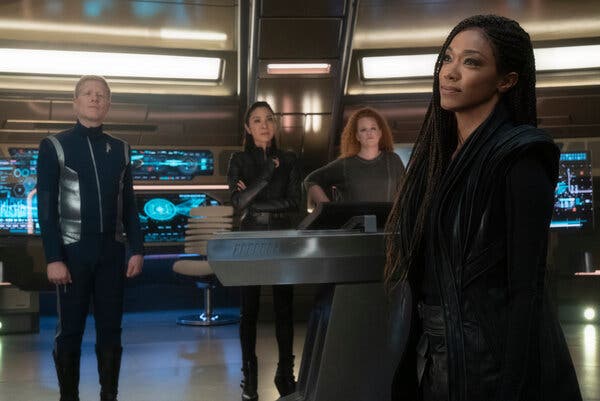 “Star Trek: Discovery” is one of five “Star Trek” shows that Mr. Kurtzman has produced.Credit…Michael Gibson/CBS

The road ahead won’t be easy for ViacomCBS. Its fledgling Paramount+ was a late entry into streaming, and is essentially a rebranded and expanded version of CBS All Access. The company promotes the service’s news and live sports, including National Football League games, along with “a mountain of movies.” (“A Quiet Place 2” debuted on it on July 13.) But Paramount+, in combination with a smaller Showtime streaming offering, had just 36 million subscribers as of May.

While it hopes to reach 65 million to 75 million global subscribers by 2024, that’s still a far cry from Netflix’s worldwide total of almost 210 million and the nearly 104 million for Disney+. Even NBCUniversal announced on Thursday that it had 54 million subscribers for its Peacock streaming service, thanks to an Olympic push.

And with consolidation mania consuming Hollywood, many analysts are not confident that ViacomCBS will be able to continue to compete with the larger companies on its own.

“Netflix, Amazon and Apple do not have that debate every day,” he added. “All their assets go into one thing. Here, they have to balance, and that makes all of their streaming services suboptimal.”

Those corporate considerations don’t seem to bother Mr. Kurtzman. Rather than bemoaning the diminished state of movies or anguishing over the lack of viable buyers as the market shrinks, he said he was finding the current climate to be creatively invigorating and remarkably fluid.

Mr. Kurtzman said he wanted to make the “Star Trek” universe as expansive as the Marvel universe.Credit…Philip Cheung for The New York Times

Mr. Kurtzman began working with CBS in 2009 when he developed the reboot of “Hawaii Five-0” with his former writing partner, Roberto Orci. In 2017, he began reimagining the “Star Trek” universe for the company, building on his familiarity with the franchise after co-writing the two J.J. Abrams-directed “Star Trek” movies several years earlier.

Also in the works are “Section 31,” starring Michelle Yeoh, and a show built around the “Starfleet Academy,” which will be aimed at a younger audience.

But how much “Star Trek” does one planet need?

“I think we’re just getting started,” Mr. Kurtzman said. “There’s just so much more to be had.”

He recently finished a four-month shoot in London for the first half of “The Man Who Fell to Earth,” a 10-episode series based on the 1976 David Bowie film. Chiwetel Ejiofor plays a new alien character who arrives on Earth at a turning point in human evolution.

Mr. Kurtzman said he loved the experience of working on the series, buoyed by the fact that the pandemic allowed him and his writing partner, Jenny Lumet, the opportunity to complete all the episodes before production began.

“I would absolutely not be doing anything differently if we were making this as a film,” he said. “I’m working with movie stars in three different countries, shooting sequences that are certainly not typical television sequences, all of which I can only do because of my experience working in films.”

Ms. Lumet met Mr. Kurtzman in 2015. He requested getting together after seeing the film “Rachel Getting Married,” which she wrote. Ms. Lumet said she was surprised that this “sci-fi robot guy in khakis” was interested in meeting her at all.

The two have worked on everything from “Star Trek: Discovery” and “Star Trek: Strange New Worlds” to the short-lived “Clarice” and “The Man Who Fell to Earth.” Next, they plan to tackle the story of Ms. Lumet’s grandmother Lena Horne in a limited series for Showtime.

Those around Mr. Kurtzman credit his early experience in television (“Alias,” “Fringe,” “Sleepy Hollow”) for giving him the ability to manage multiple projects at one time without appearing to be overwhelmed.“He has an almost supernatural ability to keep separate train tracks in his head, this show, this show and this show, and he can jump from one to the other,” Ms. Lumet said. “He is one of the few people who can keep all the trains running.”

His work as a film screenwriter began on Michael Bay’s 2005 film, “The Island.” Soon, he and Mr. Orci were being called “Hollywood’s secret weapons” for their ability to crack scripts on lucrative existing properties that others couldn’t (like “Transformers”). That led him to consider “Star Trek” in the same expansive terms that Marvel Studios views its cinematic universe. It’s a strategy that CBS Studios thoroughly endorses.

David Stapf, president of CBS Studios, points to “Star Trek: Prodigy” as an example. The animated show, one of the first animated “Star Trek” shows geared at children, is set to debut in the fall on Paramount+ before moving to Nickelodeon.

“It obviously builds fans at a much younger generation, which helps with consumer products,” Mr. Stapf said. “But it’s also a smart way to look at building an entire universe.”

To Mr. Stapf, who has overseen CBS Studios since 2004, the “Marvelization” of “Star Trek” can mean many things.

“Anything goes, as long as it can fit into the ‘Star Trek’ ethos of inspiration, optimism and the general idea that humankind is good,” he said. “So comedy, adult animation, kids’ animation — you name the genre, and there’s probably a ‘Star Trek’ version of it.”

That’s good news to Mr. Kurtzman, who wants to get much weirder with the franchise, which will celebrate its 55th birthday this year. He points to a pitch from Graham Wagner (“Portlandia,” “Silicon Valley”), centered on the character Worf, that he calls “incredibly funny, poignant and touching.”

“If it were up to me only, I would be pushing the boundaries much further than I think most people would want,” he said. “I think we might get there. Marvel has actually proven that you can. But you have to build a certain foundation in order to get there and we’re still building our foundation.”

These two rumors are going viral ahead of California’s recall election.