In Qatar, the Olympic Team (Like Much Else) Is Mostly Imported

Yaya DaCosta Joins Elite Society in ‘Our Kind of People’

Your Friday Briefing
Anasayfa » Güncel » Alberta Took on Environmental Groups, but Only Proved They Did Nothing Wrong

Alberta Took on Environmental Groups, but Only Proved They Did Nothing Wrong

When Alberta released its report into foreign influence of environmental groups on Thursday, Jason Kenney, the premier, was conspicuously absent …

When Alberta released its report into foreign influence of environmental groups on Thursday, Jason Kenney, the premier, was conspicuously absent.

During the 2019 election, I watched Mr. Kenney roar up to podiums in his full-sized pickup truck and tell generally enthusiastic crowds that “anti-Alberta energy campaigns” were largely the work of foreign influence and money. 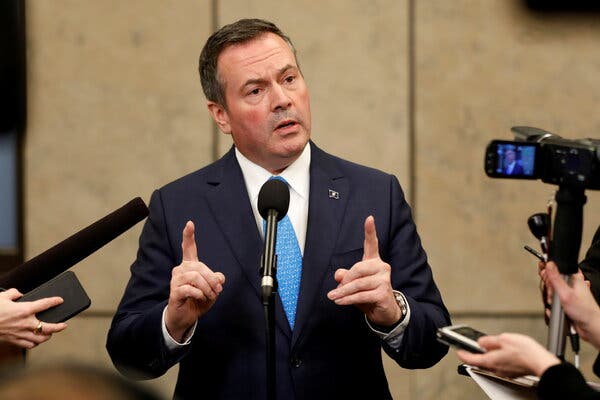 Before the vote, Mr. Kenney told members of his United Conservative Party that environmentalists began targeting the oil sands after a 2008 gathering of “special interests” that was “held at the Rockefeller brothers’ office in Manhattan.”

“You can’t make this up, it sounds like a John le Carré novel or something,” Mr. Kenney said at a party convention in 2018.

The two-year inquiry that produced the report released this week was part of Mr. Kenney’s “fight back” strategy to defend the province’s oil and gas industry.

It was unusual in that its members held no public hearings nor did they submit questions to environmental groups about their funding, methods or supporters. The inquiry’s budget of 3.5 million Canadian dollars did, however, allow members to hire an accounting firm that, among other things, reviewed the public filings that charities in Canada and foundations in the United States must make to their respective tax authorities.

Alberta’s budget and employment levels have been hard hit by the oil slump.Credit…Todd Korol/Reuters

But instead of giving Mr. Kenney the firepower he sought to diminish the influence of environmental groups, the inquiry’s findings offered little support of Mr. Kenney’s argument.

Between 2003 and 2019, the powerhouse accounting firm Deloitte calculated that Canadian environmental charities raised 8.1 billion Canadian dollars. But the firm found that during those 16 years those groups only received 37.5 million to 58.9 million dollars in “foreign funding directed to Alberta resource development opposition,” or an average of 3.7 million Canadian dollars per year across the sector, at most — just slightly more than the cost of the inquiry itself.

What’s more, Steve Allan, an accountant who lead the inquiry, wrote in the 657-page report that he did not “find that participation in an anti- Alberta energy campaign is in any way improper or constitutes conduct that should in any way be impugned.” Under Canadian law, it is not illegal for nonprofit groups to accept foreign money.

Duane Bratt, a political scientist at Mount Royal University in Calgary, told me that the report may only further damage Mr. Kenney, whose handling of the coronavirus pandemic has made him Canada’s least popular political leader.

“This was a situation where they already had the answer and then they formed an inquiry to prove that answer but they were unable to do so,” Professor Bratt said.

It was left to Sonya Savage, the energy minister, to publicly release the report, which was submitted to the government at the end of July. Mr. Kenney, she explained, couldn’t make it on Thursday because “there’s a lot of initiatives underway in the province today.”

Ms. Savage did, however, try to make a case that the findings actually supported the premier’s allegations.

The report, she said at a news conference, “shines a blinding light on the broader movement and the vast amount of foreign funding that is crossing the Canadian border often untraced.” And she blamed environmental campaigns that delayed or canceled pipelines for Alberta’s job losses since the 2014 oil price slump, as well as for the provincial budget crisis, and royalties and business failures.

“So is it illegal? No,” she said. “Was it wrong? I think the majority of Albertans would say it was wrong, and they want to know how it happened, who was involved.”

The report, however, offers little support for her analysis. While it concludes that environmental campaigns had some effect on Alberta energy projects — though it does not quantify how much — the report also says: “There is no doubt that these campaigns have occurred in an environment of reduced investment in oil and gas projects, at least since 2014 when global oil prices fell by almost half and other economic factors were at play.”

This is not the first blow to Mr. Kenney’s fight back plan. His legal challenge to the federal carbon tax failed. And even the inquiry’s report criticized the “war room” Mr. Kenney set up with a budget of 30 million Canadian dollars to challenge energy industry critics in media interviews and online.

One of the targets of Mr. Kenney’s so-called war room, the Canadian Energy Centre, was the joint French-Belgian production of the “Bigfoot Family” cartoon, released in Canada by Netflix in February 2021. “Brainwashing our kids with anti-oil and gas propaganda is just wrong — and Netflix needs to know that!” the center’s site trumpeted, urging Canadians to send protest letters to the streaming service.

Mr. Allan wrote that he found through interviews that “the Canadian Energy Centre has come under almost universal criticism,” adding that “it may well be that the reputation of this entity has been damaged beyond repair.”

Speaking with me after the report’s release, Simon Dyer, the deputy executive director of the Pembina Institute, an energy and environment research group based in Calgary, said that he was not sure what effect Mr. Kenney’s strategy has had, or will have, on environmental groups and their ability to raise money.

“There’s a sort of a chilling effect,” he said. “And the premier is on record in terms of speaking to oil, gas and gas companies, and telling them not work with us or not to fund us.”

But his major concern is the effect it’s had on Alberta’s reputation in the rest of Canada and the world.

“Alberta is just completely out of the mainstream on the conversation on climate and energy,” he said. “They just can’t seem to stop digging themselves into a hole on these issues and it’s damaging economically to Alberta at a time when we should be talking about decarbonization and diversification.”

‘It’s Not Sustainable’: What America’s Port Crisis Looks Like Up Close