Can Facebook Make Virtual Reality Happen for Real This Time?

Clint and Ron Howard Remember When They Were Just ‘The Boys’

How Social Media Turned ‘Prioritizing Mental Health’ Into a Trap

Taliban Ramp Up on Social Media, Defying Bans by the Platforms

A Hollywood Producer and a Master of Adaptation

Freedom, Maine, population 722, is about as far away from Hollywood as you can get. So when Erin French, who runs the uber-popular Lost Kitchen …

Freedom, Maine, population 722, is about as far away from Hollywood as you can get. So when Erin French, who runs the uber-popular Lost Kitchen there, had boldface names flocking to her virtual doorstep looking to buy the film rights to her best-selling memoir, she approached them with a lot of trepidation and a bit of awe.

“It was intense,” Ms. French said of the experience of selling her personal story of food, addiction and abuse, told in the 2021 book “Finding Freedom: A Cook’s Story; Remaking a Life From Scratch.” “Here you are, sitting in the middle of nowhere, a girl who felt like she had grown up a nobody, and then all of a sudden you’re having Zoom calls with Blake Lively. It was definitely a wild time.”

In addition to Ms. Lively, Ms. French and her husband, Michael Dutton, met with others like MGM and Ron Howard’s Imagine Entertainment. In the end, Ms. French and Mr. Dutton sold the rights to Bruna Papandrea and her four-year-old company, Made Up Stories. The couple said they were won over by Ms. Papandrea’s passion for the project, her clear vision of how to turn it into a movie and her track record for finding the right talent for projects.

“We’re heading into what’s referred to as ‘Shark Territory,’ getting into this whole world of Hollywood-ness,” said Ms. French, “and we felt like Bruna’s a fighter and Bruna was going to always protect us and keep pushing forward.” 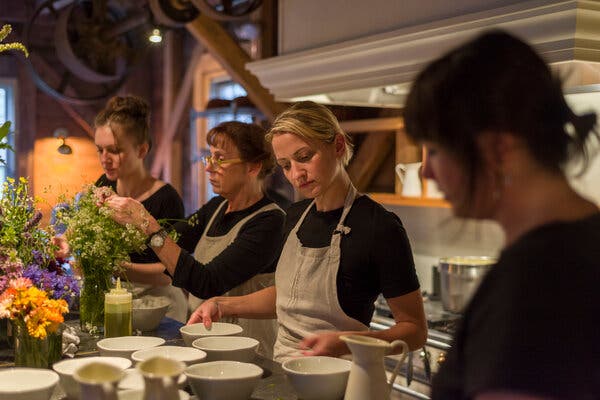 Erin French, center, sold the rights to her book to Ms. Papandrea, who she felt had a clear vision of how to turn her story into a movie.Credit…Stacey Cramp for The New York Times

With Made Up Stories, though, Ms. Papandrea has stepped firmly into the spotlight. Her latest series, “Nine Perfect Strangers,” which stars Nicole Kidman and Melissa McCarthy and concludes Wednesday, is Hulu’s most-watched original series, according to the streaming service, beating the audience numbers for acclaimed shows like “The Handmaid’s Tale” and “The Act.” Like “Big Little Lies,” it was adapted from a book by Liane Moriarty.

The show’s success, according to those involved, is proof of Ms. Papandrea’s tenacity. “She’s hard to say no to,” said Craig Erwich, president of Hulu Originals and ABC Entertainment

Shut down in Los Angeles by the pandemic, Ms. Papandrea and her team quickly shifted the entire production to Byron Bay in New South Wales, Australia. Ms. Papandrea persuaded the brand-new Soma meditation retreat to open its doors to the production before opening to the public.

“I was like, listen, I made a show called ‘Big Little Lies,’ I’m telling you it just makes your property more, it brings it a lot of attention,” she said with her clipped Australian accent.

Sitting outside at a beach cafe in Santa Monica, Calif., last month, Ms. Papandrea spoke with a machine gun cadence, dropping words at the ends of sentences as she toggled between topics. It’s a pace mirroring the frenetic schedule she’s managing as she prepares some seven productions for five streaming platforms — all movies or television shows centered on complicated female protagonists.

In the next year alone she will debut one movie and two television shows for Netflix, including the long-gestating adaptation of the best-selling novel “Luckiest Girl Alive”; a series for Spectrum Originals and BET on women’s college basketball; an anthology series for Apple TV+ titled “Roar”; an Amazon original series starring Sigourney Weaver; and a romantic comedy series for Peacock that stars Josh Gad and Isla Fisher.

Melissa McCarthy stars in “Nine Perfect Strangers,” a series on Hulu by Made Up Stories.Credit…Vince Valitutti/Hulu, via Associated Press

It is a sign of how Ms. Papandrea, known for her penchant for finishing novels in one sitting, is uniquely suited for a moment in the entertainment industry when the number of major companies able to buy content is shrinking but the need for compelling shows that will draw audiences continues to grow.

“I’m watching it all curiously because it doesn’t matter what network you run or what streaming platform you head, you have to have curators, you have to have people who have taste,” she said. “The hardest thing in the world is to find something someone wants to make, and that’s my skill.”

Ms. Papandrea teamed with Ms. Witherspoon for three years, shepherding projects like “Gone Girl” and “Big Little Lies” to the screen and racking up accolades along the way, including best actress Oscar nominations for both Ms. Witherspoon (“Wild”) and Rosamund Pike (“Gone Girl”). The two went their separate ways in 2017. Ms. Witherspoon formed Hello Sunshine, which was just sold to a new company backed by the investment firm Blackstone Group for $900 million.

Ms. Papandrea took the company’s two former employees and with her husband, Steve Hutensky, started Made Up Stories. The company now has 12 employees and offices in Australia and Los Angeles.

She attributes the split to the two women wanting different things and having “slightly different tastes.”

To finance her new operation, Ms. Papandrea sold a passive minority stake in her business to Endeavor Content, the production arm of the talent agency WME. The companies also formed a joint venture — renewable every calendar year — that allows both to serve as co-studios on all Made Up Stories television projects and some Made Up Stories films. The two share the economic risk of their entire TV development slate, but Endeavor does not pay for Ms. Papandrea’s overhead costs. She and Mr. Hutensky maintain independence over all creative decisions.

Ms. Papandrea, with Reese Witherspoon, produced hit adaptations like “Big Little Lies,” seen here with some of the cast.Credit…Christopher Polk/Getty Images for the Critics’ Choice Awards

“I just love being independent. I love it,” she said. “This path has given us the freedom and resources to compete in the marketplace for top material and writers, to bet on up-and-coming creators, to find the right path for each project and to choose the best homes for distribution among the many platforms.”

Made Up Stories is one of many companies with a partnership with Endeavor Content.

“We are platform agnostic, so we can sell her shows and our shows and other people’s shows to any platform,” said Graham Taylor, a co-president of Endeavor Content. “We’ve kind of built a United Artists 100 years later that we supply shows to every outlet.”

The job of a producer has never been easily defined. There are those who take on the title simply because they contributed some money along the way. Others, like Ms. Papandrea, work tirelessly from book option all the way to postproduction and marketing to ensure that the promises they made at the beginning of what is an often long and tortuous process will still be met at the end.

“It’s a problem. Producing credits are passed out like lollipops,” said David E. Kelley, the prolific writer and producer, who has worked with Ms. Papandrea on five projects including “Nine Perfect Strangers.” “What we just did in ‘Nine Perfect,’ for example, that’s kind of a miracle. Bruna had to blaze so much trail with the government just to get people into the country in order to shoot. It’s hard work, and it’s a lot of work.”

Ms. Papandrea works tirelessly from book option all the way to postproduction and marketing.Credit…Phillip Faraone/Getty Images For Stella Artois

Ms. Papandrea, the third of four children, was raised by a single mother in a housing commission flat in the working-class neighborhood of Elizabeth, South Australia. She dropped out of college twice: once after starting a commerce law degree at Melbourne University and later bailing on an arts degree at Adelaide University.

She tried her hand at acting. That didn’t stick.

She then got a job working as the assistant to the Australian cinematographer Dion Beebe, an opportunity that led her first to being a producer of commercials and then films. Her big break, she said, came when she started working for the directors Anthony Minghella and Sydney Pollack.

The job took her to London and then to Los Angeles, where she learned the art of adaptation from two of the best in the business.

According to Ms. Papandrea, Mr. Minghella hired her because she was smart and she made him laugh. He taught her how to treat creative people with respect and to never work with anyone she didn’t want to have a meal with.

She held on to those early lessons and has vowed to pay it forward by hiring only young talent with no Hollywood connections.

“When we hire people now, we make sure they’ve had no access to the business. We won’t hire someone off a desk,” she said. “We try and find people who have come up with no experience, because how else do you break those people in?”

Jessica Knoll was one such author. Ms. Papandrea worked with her to turn her novel “Luckiest Girl Alive” into a feature film. The two first came together seven years ago, just after “Wild” was made. But executive shuffles, changing tastes and other challenges kept the film in development for years. All the while, Ms. Papandrea stuck with Ms. Knoll as the film’s only writer — a feat in modern-day Hollywood.

“She was just so fierce in terms of how much she championed writers and how much she protected them and their stories,” said Ms. Knoll, who had never written a screenplay before adapting her own and recalls Ms. Papandrea giving her Mr. Minghella’s memoir “Minghella on Minghella” and coaching her through the process.

“I want to be in business with her forever. The room is a brighter room when Bruna Papandrea is in it.”

What They Saw in Ozy