As Canada Awaits a New Group of Refugees, Questions Loom

In Venezuela, a Rum Maker Offers Gangsters a Life Outside of Crime

Waste From Mine in Angola Kills 12 Downstream in Congo, Minister Says
Anasayfa » Güncel » 4 Takeaways From the Canadian Election

4 Takeaways From the Canadian Election

Over the past few weeks, analysts and political advisers have repeatedly told me that Monday’s vote, which cost 600 million Canadian dollars to …

Over the past few weeks, analysts and political advisers have repeatedly told me that Monday’s vote, which cost 600 million Canadian dollars to hold, would produce a Parliament that looked pretty much like the one Prime Minister Justin Trudeau dissolved in August. 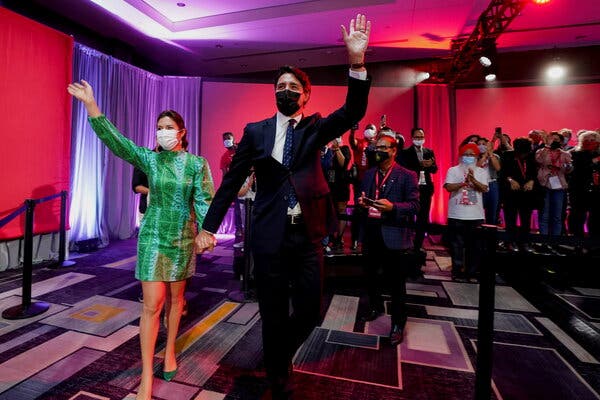 Prime Minister Justin Trudeau and his wife, Sophie Grégoire Trudeau, on Tuesday after his victory.Credit…Carlos Osorio/Reuters

[Read: Trudeau Will Remain Prime Minister, but Falls Short of a Majority]

It was an uncannily accurate forecast. As I write this, some votes were still being cast and many more were uncounted. But Mr. Trudeau’s Liberals stood at 156 seats on Monday — one fewer than it acquired in 2019 — while Conservative Party had 121 seats, the same as before.

The standings may change slightly. But given that Mr. Trudeau had called the vote to regain the majority in the House of Commons he lost in 2019 — without ever explicitly putting it in those terms — it was a vote to nowhere.

Here are some immediate takeaways from the result.

Erin O’Toole, who became the Conservative leader just over a year ago, took the party in a new, more moderate direction to broaden its appeal. He rejected a number of once-core Conservative positions, including opposing carbon taxes. And during the campaign, he reversed, with a condition, a much publicized promise to repeal Mr. Trudeau’s ban on 1,500 models of military-style assault rifles.

His campaign was noticeably better organized and more disciplined than the one run by Andrew Scheer, the party’s previous leader, in 2019. Yet it brought no gains.

On Tuesday morning Mr. O’Toole devoted much of his concession speech to outlining how he’ll take on the Liberals in the next election. But Duane Bratt, a political scientist at Mount Royal University in Calgary, told me that before that happens, Mr. O’Toole will have to sell himself to his party.

“He could not penetrate the 905 in Ontario,” Professor Bratt said, referring to the area code for suburban Toronto. “As someone from a riding in that area, he said that he could win there.”

Mr. O’Toole, Professor Bratt said, will most likely argue that there’s a benefit to keeping him as leader for the next vote — something the history of successful Conservatives in the past has shown. But it may be a difficult sell.

“Is there a benefit to giving him a second go run?” he said. “I think voters might like that. I just don’t know about the Conservative Party; they’re a tough party.”

Mr. Trudeau during a campaign stop in Maple, Ontario, this month.Credit…Cole Burston/Getty Images

After Mr. Trudeau steered his party to two consecutive minority governments, will the Liberals start doubting the worth of their leader, who unexpectedly swept them to power with a strong majority in 2015? Not likely, Lori Turnbull, a political scientist at Dalhousie University in Halifax, told me last night.

“There is really something to the argument that Trudeau has made the Liberal Party his own,” she said. “And the loyalty to the party is really loyalty to him. When everybody’s loyalty is to the leader, then it’s almost like the leader can do no wrong and people kind of rally around him.”

Professor Turnbull said that she was hard-pressed to recall another time when an early vote call by a government that sensed political game persisted throughout the campaign.

It’s also difficult to recall any kind of an election that was met with general jubilation in Canada. But Elizabeth Goodyear-Grant, a professor of political science at Queen’s University in Kingston, Ontario, said in an email that while Canada was not a land of election haters, there is definitely “push back” against early votes.

“From a political science perspective, voters want accountability and ‘voice.’ so it seems a bit odd not to seize on those opportunities to exercise them,” she wrote. “Even if the outcome is relatively similar to the 2019 federal election, rather than ask ‘what was the election for?’ we could also choose to see it as an endorsement of the path we’re on.”

Is This the Future of Canadian Votes?

Supporters for Mr. O’Toole waiting for his concession speech on Monday. Future elections may see the major parties trade a small number of seats without substantially altering their positions.Credit…Ian Willms/Getty Images

Allan Tupper of the political science department at the University of British Columbia told me this morning that’s there’s no obvious sign that broad regional voting patterns found in the past two elections will change.

“The pattern of support is quite strong,” he said. “It will require a major set of changes in political problems, political issues, political values to shift Canadians out of those patterns.”

Until that happens, Professor Tupper said, we’re likely to see more elections like this one, in which the major parties trade a small number of seats without substantially altering their positions relative to each other.

“It just means the elections become a game of inches,” he said.

After a Long Lockdown and Vaccination Campaign, Is England on the Road to Normality?

‘West Side Story’ Will Not Return to Broadway

A fire at coronavirus hospital in North Macedonia kills at least 14.
ZİYARETÇİ YORUMLARI